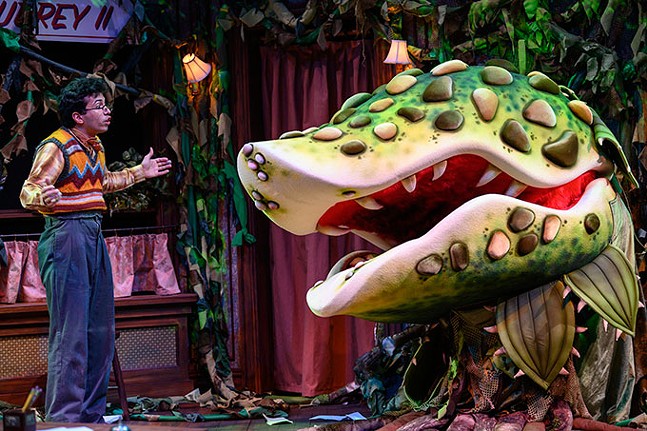 Warning: This is a millennial’s take on Little Shop of Horrors, playing now through Sun., Feb. 23 at Pittsburgh Public Theater.

Until seeing Little Shop of Horrors at Pittsburgh Public Theater, I only had one memory connected to the 1960s film-turned-musical comedy: It’s summer, and I’m lying on the floor in my cousin’s sunroom pretending to laugh so hard that I die. (I now realize that I was pretending to be high on nitrous oxide, aka laughing gas.) In seeking their approval, I went along with whatever ideas, games, or childhood nonsense that my two older cousins presented. Chardonnay, the oldest, wanted to reenact scenes from her favorite film, Little Shop of Horrors, and make a movie of our own.

When Pittsburgh Public Theater announced it would be performing the cult classic (over the years, it’s been adapted from a film to a musical and then back to a film), I jumped on the opportunity to see what the fuss was about.

I decided to see the show without looking up anything online. All I knew was that there was a part where someone dies from nitrous inhalation. Given that information, I was surprised to find that Little Shop of Horrors is a musical – not a play, as I originally thought – set at Mushnik’s Florists, where a clerk named Seymour (Philippe Arroyo) discovers a mysterious plant with a taste for blood. 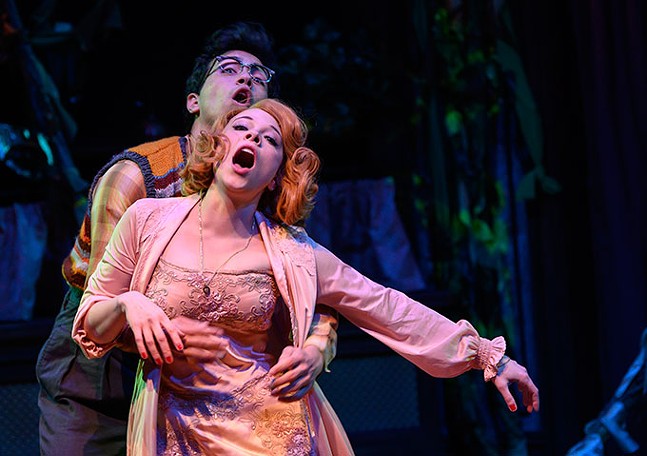 The heavy topics of death and partner abuse, however, are masked by the bizarre plot, cheesy punchlines, and, of course, singing. And while I’m not a fan of musicals (neither was the friend who accompanied me), Little Shop of Horrors was seriously entertaining. The show seamlessly moves from speaking scenes to musical numbers without feeling forced. The songs match the quirky essence of the plot, and both my friend and I found ourselves consistently laughing out loud.

What takes the show to the next level is the set design by Timothy Mackabee, who has worked on the scenic design for Fox’s Gotham and Disney’s Frozen on Broadway, among other projects. Mackabee creates a world that pops out at viewers, encasing you in the story. Fire escapes used by the actors are placed around the theater, making it feel even more intimate than it already is. The puppets, which grow in size as the show progresses, are beautifully designed and move effortlessly around the stage.

Little Shop of Horrors is unlike anything I’ve seen at Pittsburgh Public Theater and the production renewed my faith in musicals. I only wish I hadn’t waited so long to drink the bloody Little Shop Kool-Aid.