Resurrect Dead: The Mystery of the Toynbee Tiles

A fascinating documentary examines those mysterious tiles in city streets 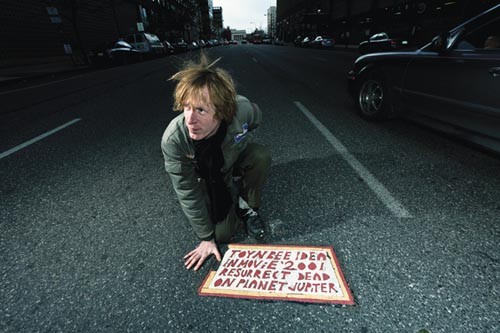 Streetwise: Justin Duerr poses with his obsession, a Toynbee tile.

The "Toynbee tiles" have been an enduring contemporary mystery. In the late 1980s, the tiles began appearing in city streets throughout the Northeast and the Midwest. Each was slightly different, but all appeared created by one artist, and most bore the cryptic phrase: "Toynbee Idea in Movie 2001 Resurrect Dead on Planet Jupiter." (Four remain in Downtown Pittsburgh -- three on Smithfield Street and one at Forbes and Ross.)

Later, the Internet let enthusiasts share information about the tiles. They began trading locations, photographs and endless speculation about what the tiles meant, who might be creating them and why. (As well as how they were laid: Tiles have been found on such busy and inaccessible spots as freeways and outside New York City's Holland Tunnel.)

Jon Foy's shaggy but fascinating documentary Resurrect Dead: The Mystery of the Toynbee Tiles follows Philadelphia artist Justin Duerr and his two collaborators on their multi-year search to uncover the origin of the tiles. Their quest bounces from tantalizing clues to dead-ends. Rail yards, David Mamet, South America, ham radio and a 1968 sci-fi film: Can there be any connection?

Despite its mysterious subject, Resurrect is a straightforward detective story, unfolding as each clue is explored, filed away or discarded. But it also offers a meditation on what the tiles may mean. (Their message is ultimately decoded, but to say any more about what these armchair detectives uncover would only spoil the film's intrigue.) Yet although they can "read" the tiles, it's harder for the investigators to uncover the why of it all: What makes an artist, with a distinct if inscrutable message, go to great lengths to work in a very public sphere …while apparently choosing to remain anonymous for more than two decades?

Viewers may initially question Foy's decision to include so much biographical detail about Duerr, an artist whose life has bounced from farm to punk-rock squat. But the film is more than an expository work about the tiles; it's also an examination of using art and media to communicate an obsession. Thus, the film is a bit of a meta-text, itself the result of individuals obsessed with the tiles, in particular Duerr, an outlier who feels an affinity with the unknown tile-creator.

Often the best part of a mystery is that it remains unknowable, leaving space for us to ruminate and create our own answers. That can be as powerful a connection, especially to art, as knowing the truth. Foy's film -- and Duerr himself -- understand this, and their collaboration walks a satisfyingly fine line between the satisfaction of knowing and the celebration of mystery.