A new documentary puts you on the frontlines in Afghanistan 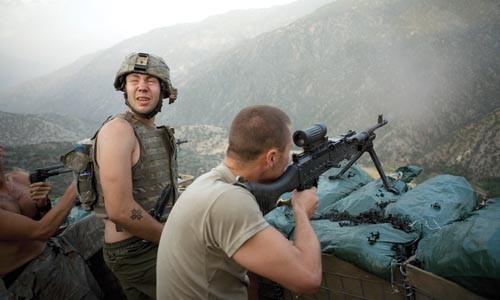 The war -- or whatever it is -- we're waging in Afghanistan -- for whatever reason -- is nearly nine years old. In many ways, it's been the neglected child, never garnering the same popular or media attention as the Iraq war. But we're still there: In fact, causalities have been increasing. And at long last, Afghanistan is getting a close-up, quite literally, in a new documentary.

The cinema vérité-style Restrepo documents the 15-month deployment of the U.S. Army's Second Platoon Battle Company, which was sent to the Korengal Valley in May 2007. Located in the far eastern mountains of Afghanistan, it's considered a dangerous posting, a steep narrow valley ringed with Taliban fighters. The soldiers describe it variously as "middle of nowhere" and "a shithole," and themselves as "fish in a barrel."

After establishing the Korengal Outpost, their mission is to provide security so that (perhaps) a road can be built into the valley that will (perhaps) lead the impoverished residents to choose commerce rather than the Taliban.

Two events create a loose narrative beyond the film's apt tagline of "One platoon, one valley, one year." First, the soldiers reclaim a Taliban artillery nest high in the mountains, and out of rock and sand, they create a 15-man outpost they name "Restrepo," after a recently fallen comrade. Later in the year, the platoon takes the fight to the enemy, venturing into the mountain's pine forest, in an operation nicknamed Rock Avalanche, that lives up to its dangerous moniker.

Documenting all this is a pair of well-established media professionals: Tim Hetherington, a British war photographer, and writer Sebastian Junger (The Perfect Storm). Over the course of the deployment, they returned repeatedly to Korengal with their cameras.

The film, which earlier this year won the Grand Prize for documentary at Sundance, is presented without comment from the filmmakers. (The two were embedded with the Army's permission, and thus one presumes the access was subject to some restrictions.) There are a few titles to establish locations, dates and persons speaking, but there is no voiceover, no musical score, no footage other than what was shot in Korengal or in post-deployment interviews. (There are two teeny exceptions: home video shot by the men on the way to Afghanistan, and video of a bomb-scope from an aerial assault.)

Viewers can bring their own political commentary if they wish, though Restrepo works as strictly a fly-on-the-wall account. Anti-war folks may bemoan the cycle of retaliatory violence, or the futility of trying to impose order on chaos; supporters will see some progress and hard-working soldiers surviving dangerous conditions, a daily life unimaginable to us. We see a little of the Afghans: A series of shuras, or meetings with local elders, are exercises in increasing frustration and disconnect, for both parties.

The unseen Taliban are the enemy, but the land is no friend either: steep and mountainous, blazing hot in the summer and frigid in the winter. There's something primal about the Restrepo outpost. These men build its walls and huts by hand, and with shovels. Amenities are few, sanitation primitive. Life at dusty Restrepo is monochromatic; the only color is the incongruously bright blue tops of bottled water.

Despite its lack of story, Restrepo remains engaging, and even revelatory. The soldiers exhibit plenty of hoo-rah and braggadocio, but boredom, fear, grief and confusion are also evident. (Oddly missing: any scenes of conflict, however petty, between the understandably stressed-out men.)

"I haven't figured out how to deal with it inside," says one soldier of what he's experienced. It's tough when his captain orders, "I want you guys to mourn, then get over it and fight." In the interviews conducted post-deployment, the soldiers -- shot in close-up and out of uniform -- look astonishingly young, except in the eyes. (In contrast, the Afghan tribal elders they meet with are so ravaged by poverty and the harsh environment that they could be anywhere from 40 to 140.)

I'm admittedly a fan of larger context when tackling such multi-faceted (and ever-shifting) scenarios as the U.S. role in Afghanistan. But every big picture is made up of tiny dots that we don't always see. Restrepo zooms in on one of those dots, which is made up of the war's most valuable and oft-neglected asset: the guy fighting it. His big picture is immediate and vivid: his survival and that of his comrades. If there are bigger strategies at work in Kabul or Washington, D.C., they hardly matter.

And Restrepo, that outpost the men worked so hard to build? It was abandoned this spring, when the big-picture mission shifted once again.