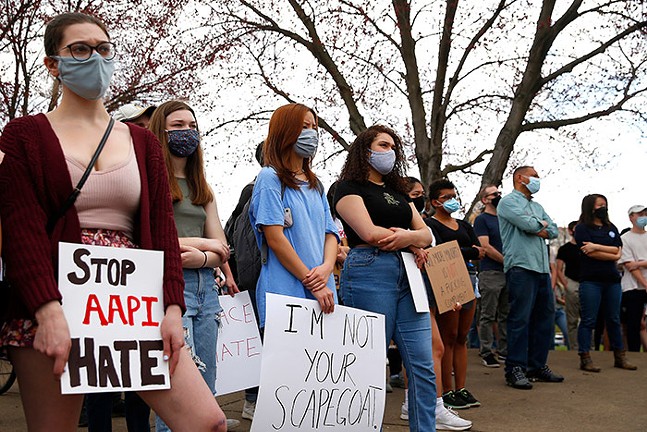 CP photo: Jared Wickerham
The Pittsburgh Rally for Solidarity march on Wed., March 24, 2021
A group of organizers will raise awareness about the issues facing Asian American and Pacific Island people, namely women, with a free event at the Carnegie Museum of Art.

REST is co-organized by women-identifying artists Anny Chen, Lena Chen, and Caroline Yoo, who are of Taiwanese, Chinese, and Korean descent, respectively.

The event was created in response to the March 16 shootings in Atlanta, Ga., where a 21-year-old white gunman killed eight workers at three different massage spas. It was revealed that six of the women were Asian, from the countries of China and Korea.

“The shootings in Atlanta have had a traumatic impact that has mobilized many into action, but sustainable change also requires that we give ourselves space to process emotions and address bodily manifestations of trauma,” reads the event description. “Let us take this time to rest and reflect, to hold and be held, and to grieve and rejoice in honor of those whose lives were unjustly cut short and whose dedication to healing and caring will not be forgotten.”

Since the shootings, rallies across the country, including in Pittsburgh, and outcry from activists and others have pointed at the massacre as a prime example of the racist violence against those in the AAPI community, especially in the wake of COVID-19, the spread of which many right-wing figures and former President Donald Trump blamed on China. Data compiled by California State University’s Center for the Study of Hate and Extremism concludes that 2020 saw a huge spike in anti-Asian American hate crimes in 16 of the country’s major cities. In total, there were 122 reported incidents, an increase of almost 150% compared to 2019.

Anny Chen, a local teaching artist who has worked for nonprofits like ASSEMBLE, says she has seen examples of discrimination during the pandemic, especially in regards to cuisine.

“There has been a lot of fear around eating Asian food and visiting Asian restaurants and shops during [COVID-19], while many white restaurateurs continue to appropriate and profit from our culture, all the while with a racist rebranding of serving ‘clean’ Asian food,” says Chen. “I have my own experience with this, working at an ‘American dim sum’ restaurant and being made to fetch the dim sum tray and pose for the photographer when critics came around to bring validity to the restaurant’s exploitive menu.”

Because of this, Chen says REST will feature two Asian restaurants hit hard by the pandemic, Maiku Sushi in the Strip District and Sakura Teppanyaki in Squirrel Hill. There will also be Asian snacks at the event.

The Atlanta tragedy has also drawn attention from sex worker advocates who see it as an attack on their industry. One Washington Post article says the gunman, Robert Aaron Long, told law enforcement that he was a regular customer at two of the targeted massage spas and that he viewed the employees as “temptations” he needed to “eliminate,” signaling that he “set out with the intention of attacking Asian women whom he perceived to be selling sex.”

Lena Chen is a sex worker and artist who serves on the SWOP PGH steering committee, and emphasizes that “massage work, sex work, and care work all share many intersections.”

“The victims of Atlanta's shooting died while working in service to others, offering comfort and healing to clients, and supporting their family and loved ones,” says Lena, adding that massage workers of Asian descent are also “often endangered by police and state surveillance.”

Lena cites Red Canary Song, an NYC-based grassroots organization that serves massage parlor workers of Asian descent and was founded in the aftermath of the death of Yang Song, who fell from a balcony in Flushing while escaping an NYPD vice raid. “They have found that massage workers do not feel more safe or protected by police,” says Lena. “They would be instead best served by full decriminalization of sex work and an end to all deportations.”

Anny says that, overall, the event is for “our AAPI, massage worker, and sex worker community to make time for healing, grieving, and making connections.”

“I've witnessed so many AAPI glide over trauma and grief by working harder, many of us responding to this tragedy by springing into action and organizing,” says Anny. “We really wanted to put on an event where our communities can just receive care and find community with one another.”

If you would like to volunteer, contact swop.pittsburgh@gmail.com. Donations will also be accepted at swoppittsburgh.com/donate. Funds will go toward event expenses, fees for AAPI organizers and volunteers, the SWOP PGH Mutual Aid Fund, care packages for local massage workers, and donations to Red Canary Song and the families of the Atlanta victims.REST: A Day of Healing and Art. 4-7:30 p.m., Thu., April 1. Carnegie Museum of Art. 4400 Forbes Ave., Oakland. Free. swoppittsburgh.com/events 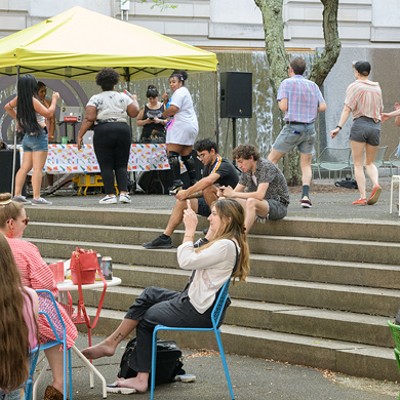