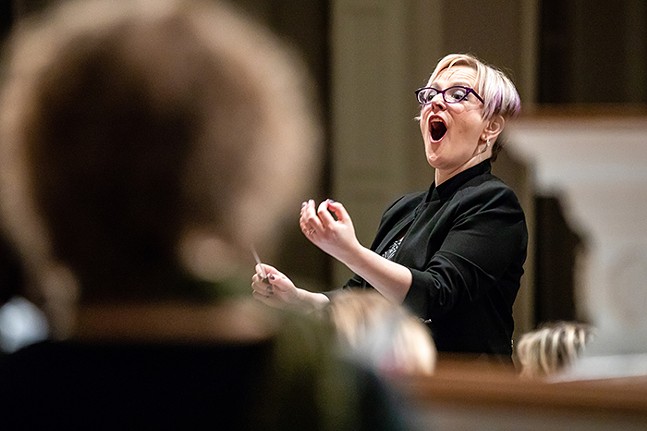 Photo: Alisa Innocenti
Maria Sensi Sellner conducts the Resonance Chamber Orchestra.
In the most recent season of 15 major orchestras worldwide, 94.7 percent of concerts presented only works by male composers, according to a study by Drama Musica.

But Pittsburgh performing arts company Resonance Works Pittsburgh and its founder Maria Sensi Sellner are working to change that.

At least half of the composers in Resonance Works' upcoming programming, starting with its 2019-2020 season announcement this week, will be women. It's something that has always been important to Sellner, both as the principal conductor and the artistic and general director of the company she founded in 2013.

"We are very lucky that Pittsburgh has such a vibrant music community that is constantly growing," says Sellner. 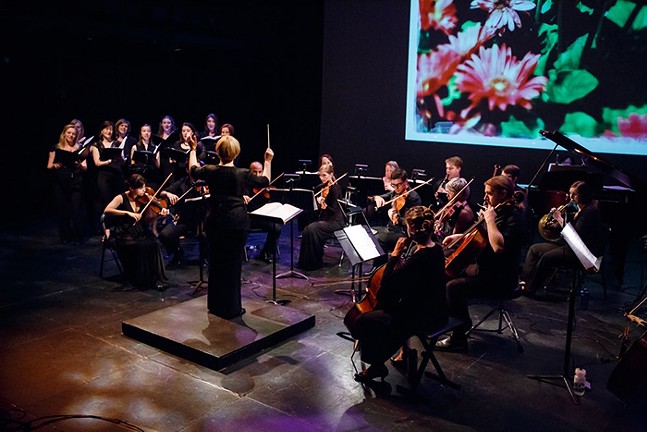 Photo: Alisa Innocenti
The Resonance Chamber Orchestra performs with vocalists.
The upcoming season includes a new take on Giuseppe Verdi's opera Rigoletto in the context of the #MeToo movement. Resonance Works will partner with Pittsburgh Action Against Rape (PAAR) for the May 2020 performances, to help the group "create discussion and awareness about the issues, including sexual assault."

"PAAR looks forward to working with the performing arts community here in Pittsburgh," a spokesperson from PAAR says in an email to CP. "Resonance Works is leading the way in making prevention possible for their community members through this collaboration."

CP talked to Semler about the upcoming season after the announcement


Was it a conscious decision for you to include more women in Resonance Works' programming?

Yes, definitely. Unfortunately, when you look at the programming of almost all musical organizations, the composers are still almost exclusively men. The industry is making some strides in recent years, but “strides” means the percentage of pieces by women is still in the single digits. It is notable when major American orchestras perform more than one piece by a woman in a season, which is sad, considering we are more than half the population!

It’s true that for a long, long time, women were not encouraged to be composers, and so there isn’t as much repertoire from those eras, though it does exist. Today there is a myriad of magnificent composers who are women, but since audiences are still used to it being such a rarity, it will take some effort to change the paradigm. That is what we are aiming for — to show the audiences in Pittsburgh what gender equity in programming looks like, while continuing to create unique and intimate performances as we have done for our first six seasons. You won’t find a program in our season where the point is to have a concert of music by women.

How do you think Pittsburgh compares to other cities in making classical music performances more inclusive for women and people of color?

The news is better for instrumentalists, with the impact of blind auditions increasing the number of women in American orchestras, though the national average is still around 63 percent men to 37 percent women. I’m very proud that in our Resonance Chamber Orchestra, our average has been completely the opposite, and not because of any specific effort to make it so.

Classical music in general still has a long way to go towards inclusivity for people of color. I believe that we will best serve our audiences when the artists on our stages represent all of the people in our communities, so this is also something we will be working on.

Have you faced any obstacles as a woman in such an important leadership position yourself?

Being a conductor is challenging regardless of one’s gender. However, since it is a field that has been so completely dominated by men for hundreds of years, talented women still struggle to find as many opportunities as our male counterparts. Of my group of colleagues that I met as a student, many more of the men are working with regional orchestras and opera companies today, and not because of greater talent. It is still considered a “risk” to hire a woman on the podium in many places, and, as a result, there is much more pressure for women to be flawless when those opportunities come. 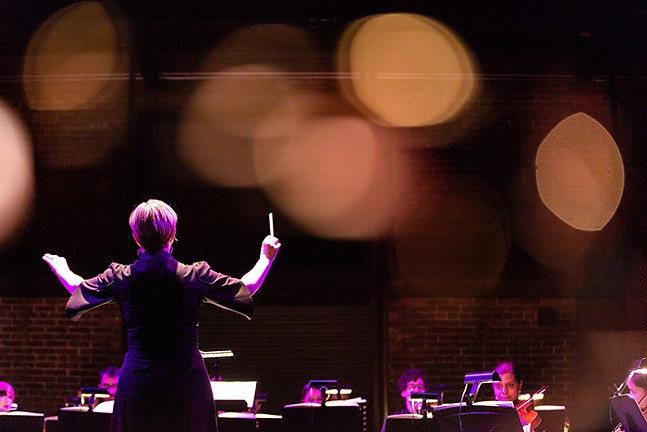 Your upcoming season touches on some political and social issues. Is classical music becoming woke?

I believe that the best and most moving performances connect with people and have relevance to our lives today. This season, we are making more specific connections which I feel are important and relate to issues that are at the forefront of our local and national conversation. If that means we’re becoming woke, then maybe so! I don’t see any of it as political, but becoming more inclusive on several levels.

Our first program of the season is inspired by a piece by David Lang called “the national anthems,” which was the result of an examination of the anthems of all the United Nations and discovering what we all have in common. The program will weave together music from many cultures, and we will have tours of the Nationality Rooms at Pitt before the performances. I think it’s important to celebrate that diversity is strength, and the contributions of people from all over the world have made Pittsburgh (and our nation) great. Growing up, I always identified with the cultural traditions of my immigrant grandparents on one side and great grandparents on the other, as well as other cultural traditions in our community.


You will be working with local advocacy group, Pittsburgh Action Against Rape, for a production tackling the #MeToo movement. What do you hope to achieve with this partnership?

The stories of many classic operas can feel very removed from our society today, with people in corsets and hoop skirts and the like, and the depiction and treatment of women feel very distant and antiquated. But the truth is that many of these stories do have modern relevance, unfortunately. Our production of Rigoletto will update the story to the 1930s and will look at Gilda’s story through the lens of the #MeToo movement. By partnering with PAAR, we aim to have a discussion about the very relevant current issues portrayed in the opera, as well as amplify their message, increasing awareness of the important work they do.


How have Resonance Works' audiences changed since you first founded the company in 2013?

Our audiences are continually growing and evolving. The challenge with starting a company that produces such a wide spectrum of performances was reaching (at least at the beginning) many different audiences. Some came for opera, some for orchestral or choral pieces, and others for chamber music or musical theater. We hoped that people would appreciate the intimacy, artistic quality, and uniqueness of all of our performances and then trust us enough to try new things. I’m happy to share that this is what is happening now. We always survey our audiences, and the comments I’m most proud of are those that say that they didn’t know anything about the music ahead of time, or came in thinking they wouldn’t like something, but then absolutely loved the performance.


What are you most excited for this season?

That is a tough question, since I’m excited about all of it! But if I have to pick a few things ... I’m very excited about the artists that are joining us for the first time, including director Matthew Haney, baritone Ben Taylor, and mezzo Olga Perez Flora who will be in our new production of Amahl & the Night Visitors in December; tenor Ángel Vargas who will be the Duke in Rigoletto, and Jeffrey Turner who was principal bass of the Pittsburgh Symphony for many many years. Jeff will be the soloist for Missy Mazzoli’s recent bass concerto called “Dark with Excessive Bright” and ours will be among the first performances of this work in the country.