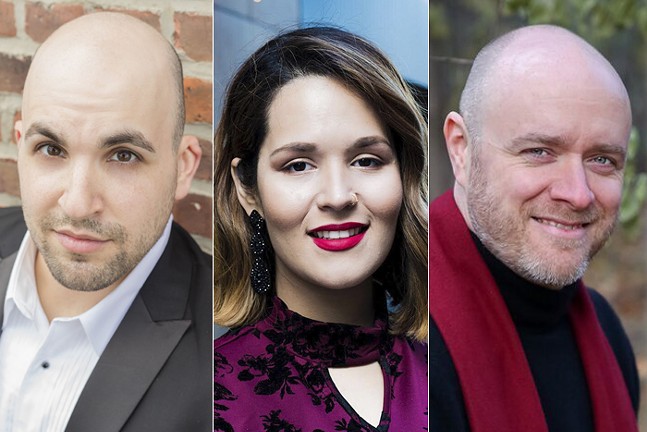 Rigoletto, playing Fri., May 20 and Sun., May 22 at the Carnegie Music Hall, tells the story of Rigoletto's "pure-hearted" daughter Gilda, who falls in love with an infamous Duke in disguise, and the world of privilege and power she is exposed to as a result. Rigoletto will be played by Andrew Cummings, with Gilda played by Venezuelan soprano Maria Brea.

"There are several reasons why Gilda is an incredibly complex character. Vocally; this role navigates every single technical aspect of the human voice: trills, acciacaturas, cadenzas, etc. In terms of style, there is so much nuance and depth in Verdi style that one can spend a whole session in one page and still feel like there is something else you could discover the next day," says Brea in a press release. "In terms of character, it takes you on a journey, really gruesome things happen to Gilda that it's impossible not to feel upset and uncomfortable as you read the libretto. Can't wait to approach this piece with respect and appreciation."

The Duke of Mantua will be played by Jeremy Brauner, whose voice has been described as "spine-tingling." The rest of the cast is comprised of an array of talented singers and performers, namely Sergio Martinez, a Columbian bass who is making his U.S. professional debut. Martinez will be joined by mezzo-soprano Timothi Williams, who serves on the faculty at Slippery Rock University, and baritone Graham Fandrei, the new director of programming of the Pittsburgh Cultural Trust.


“We’ve been anxiously waiting to be able to stage Rigoletto since it was postponed in 2020. Now, we have assembled some of the most exciting emerging opera artists in the country to bring it to life,” says Maria Sensi Sellner, conductor and artistic and general director of Resonance Works. “With incisive direction from Mo Zhou, this familiar classic takes on a new urgency as we reframe Gilda’s experience for a 21st-century audience.”
Rigoletto. 8 p.m. Fri., May 20 and 3 p.m. Sun., May 22. Andrew Carnegie Music Hall. 300 Beechwood Ave., Carnegie. $10-50. resonanceworks.org