CP Photo: Natalie De Paz
Maria Dominique Lopez (left) and Helen Zhibing Huang (right) rehearse I Am a Dreamer Who No Longer Dreams in a rehearsal space in the lower level of the First United Methodist Church of Pittsburgh.

During rehearsals of I Am A Dreamer Who No Longer Dreams, a new opera making its Pittsburgh premiere this month, singers Helen Zhibing Huang and Maria Dominique Lopez practice a duet about being reduced to “a tiny piece of plastic” — a green card.

The opera — created and written by Cerise Lim Jacobs, and composed by Jorge Sosa — responds to threats against the Deferred Action for Childhood Arrivals (DACA) act by former United States President Donald Trump.

Maria Sensi Sellner, artistic and general director of Resonance Works, the Pittsburgh theater nonprofit producing the opera, conducted the 2019 world premiere of I Am A Dreamer Who No Longer Dreams in Boston, where it was originally commissioned and produced by White Snake Projects.

“The question in 2018 was ‘Is this going to remain relevant?’” Sensi Sellner says while taking a break during rehearsals at the First United Methodist Church of Pittsburgh. “And in 2019, as we were coming into the rehearsal room every day, that is when you were seeing headlines about children in cages at the border and it felt more relevant, and I think it continues to feel more relevant on deeper and deeper levels.”

Being from the Pittsburgh area, Sensi Sellner had I Am A Dreamer Who No Longer Dreams slated for production by Resonance Works in 2020, which was delayed by the COVID-19 pandemic.

I Am a Dreamer Who No Longer Dreams will finally stage here on Fri., Oct. 14 and Sun., Oct. 16 at Andrew Carnegie Free Library & Music Hall in Carnegie.

The opera follows the relationship between Rosa, an undocumented Mexican immigrant, and her attorney, Singa, an ethnically Chinese immigrant from Indonesia.

“We have Rosa who is a community organizer,” Sosa tells Pittsburgh City Paper during a Zoom interview. “She’s in protest, trying to have her voice be heard in favor of migrant rights, and then she’s arrested and incarcerated and now is fearing — without any protection, is facing — really horrible outcomes. There’s no good outcomes for her. She’s either facing prison time or deportation and the separation from her daughter.”

The show confronts the idea of the so-called American Dream promised to those who settle in the U.S. When asked what the phrase means to her, Huang, the soprano filling the role of Singa, says, “We’ve been talking about it a lot [during rehearsals], actually.”

Huang shares that she sees the American Dream as a “myth that we believed as children.”

“It’s not always equal opportunity for everyone,” she continues. “But also that hope that there is a possibility for us to keep striving is important because, if we only live in a world of darkness and there is no hope, then the world is bleak and there’s nowhere to go, right? It’s the hope that keeps all of us going.”

Mezzo-soprano Maria Dominique Lopez, who plays Rosa, has a more frank take on the American Dream. “It’s a total joke,” says the singer. “I think the American dream is propaganda. It’s nationalist propaganda that was created to raise up the idea of a meritocracy that just really helps to bolster capitalism and the dominator culture that we live in, and have lived in, for many centuries.”

Of the role of Rosa, Lopez says, “I’m half Indigenous Mexican and half-white. And so, to have a role where I get to sing about being ‘an in-between person’ ... When I read that line in the libretto, in the score, I felt like I had been stabbed with a hot poker … It’s so relatable.” 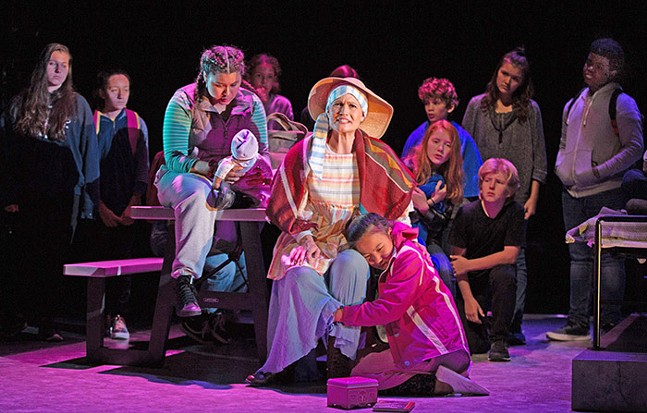 Photo: Kathy Wittman
White Snake Projects’ 2019 premiere of I Am A Dreamer Who No Longer Dreams

Much of the opera takes place in a sort-of memory space of the two principal characters as they reflect on their lives. These memories and dreamlike sequences are often highlighted by a children’s chorus, this time being performed by the Pittsburgh Youth Chorus. Regarding the children’s chorus, as well as the two soloists playing young Singa and young Rosa (Chengxi Tao and Elizabeth Rosales), Sosa says it was important to include young voices because “Dreamers were children. That’s what classifies them as qualifying for DACA protection, is that they came here when they were minors. And they had no agency in deciding to come to this country.”

Sosa expresses gratitude for the opportunity for his and Jacobs’ work to be produced for a second time, which he says is rarely the case for contemporary opera. He explains that representation and diversity are very scarce in the arts, especially in the realm of opera, an art form dominated by the works of dead white men.

Sensi Sellner shares that, while she loves pieces from the canon and considers them important, she believes that it’s imperative for the art form to have fresh work produced from varied perspectives in order for it to continue to thrive.