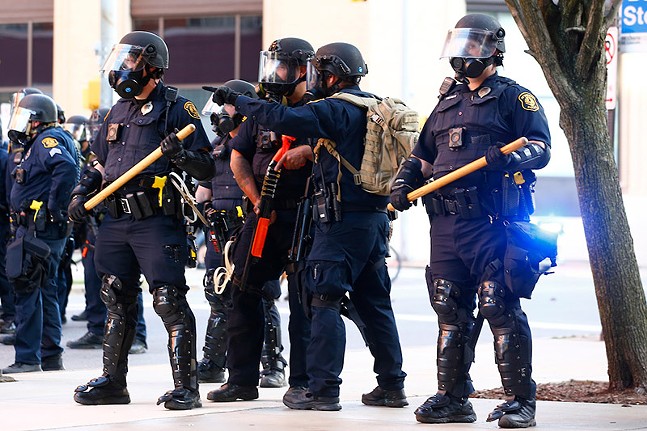 CP photo: Jared Wickerham
Pittsburgh Police stand guard outside a protest in East Liberty on Mon., June 1.
UPDATE, 7 p.m. June 5:
After being visited by Pittsburgh Police the day after police fired tear gas and rubber bullets at protesters, two women have been charged by police with allegedly throwing water bottles at police.

Abigail Rubio, and her friend Natalie Lewis, were charged on June 4 with felony riot, as well as misdemeanor propulsion of missiles and disorderly conduct, the day after Pittsburgh City Paper and the Pittsburgh Post-Gazette published stories about officers visiting Rubio at her apartment on June 2.

Rubio and Lewis have denied these accusations.

According to WESA, a police affidavit filed with the charges after investigation began when an undercover agent with the Pennsylvania Attorney General’s office “observed two females on a fourth-floor balcony of the Essex House apartments.” The affidavit goes on to say that police witnessed that a "blonde female threw a water bottle directly at the van containing six [state police], while a dark-haired female threw a water bottle at an officer with his K-9 partner." And that the bottles landed close enough to the officers that their “attention was diverted from the crowd in front of them, and they initially had to take cover behind the [state police] van fearing additional projectiles.”

The affidavit also quotes Rubio making the same denial as she told media outlets. The affidavit does not say the video evidence shows bottles being thrown, or offer other evidence except police eyewitness accounts. Rubio told CP that when she asked to see the video of her allegedly throwing a bottle, the police showed her stills from a video of what she says is her holding her phone.

Both Rubio and Natalie were also charged with felony "police animal," but those appear to be invalid. The statute charged was filed under a law that was repealed in 2017.

Original story, June 2:
On Monday night, Pittsburgh Police fired rubber bullets or bean bags and tear gas at a crowd of about 100 protesters marching on Centre Avenue in East Liberty. Public safety officials claim they needed to use crowd-control equipment to break up the march, which they called a “splinter group” that had vandalized storefronts in the neighborhood, and initiated throwing rocks and bottles at the police.

However, firsthand accounts and videos on social media dispute these reports. As it appears, police fired rubber bullets and tear gas first. And the vandalism that occurred before the confrontation on Centre Avenue was allegedly carried out not by a group, but by a lone actor who marchers shouted down as he smashed windows at Dollar Bank and Villa shoe store on Penn Avenue.


IN FACT, here is a video showing a protester hit in the knee with something well before the tear-gas canister was sent in front crowd. He says it came from police, and they found a rubber bullet later. pic.twitter.com/SfkvepLUtH

As part of their justification for using tear gas and rubber bullets, Pittsburgh Police Commander Jason Lando claimed that “water bottles were thrown from Essex House Apartments 10 floors up,” according to KDKA.

Now, a resident of Essex House is sharing her story of police accusing them of throwing water bottles and threatening one with a search warrant.

Abigail Rubio is a resident of Essex House at the corner of Centre and Negley avenues in East Liberty. She says she attended the early part of Monday’s protest, where about 1,000 marched through the streets without incident, and then went home after leaders told the march to disband. The protests and marches were in honor of a Black man killed last week by a Minneapolis Police officer, and Breonna Taylor, a Black woman killed in March by police in Louisville, as well as condemning all police brutality.

Rubio says she walked home to Essex House, unaware that a group of about 100 protesters had continued to march down Centre Avenue. After being home for about 10 minutes, around 7 p.m., she heard sirens and saw police vehicles set up on Centre Avenue.

Rubio is a soon-to-be University of Pittsburgh medical student and was raised in Wexford. She watched the Centre Avenue march and skirmish from start to finish. She denies throwing anything from the balcony of her unit, and says that she didn’t see anything fly from any other unit at Essex House or other buildings.

Yesterday at around 12:30 p.m., Rubio says that Pittsburgh Police arrived at her apartment and asked to speak to her about the incident. She obliged, but initially rejected showing them her ID when requested. She says that’s when police told her that if she didn’t show ID, they “would make it extremely difficult for me” and “share video of her recording from her balcony with media outlets.”
At the 1:48 mark, it appears an officer takes a photo of Rubio, who is filming from her balcony on her phone.

After returning inside and speaking with her mother and a neighbor who is a family lawyer, she showed them her ID, believing that the police could already identify her.

Rubio says that is when police accused her of throwing water bottles and said they had video of it. When Rubio asked to see the video, she says the police showed her stills from a video of her holding her phone.

“I don’t know why they think I would throw things from my own property, it’s the most incriminating thing I can do,” says Rubio.

She then says police asked about Rubio’s friend who was filming with her on the balcony during the march and confrontation. She says she refused to provide information about the friend. She says her friend also didn't throw anything. Rubio says this is when police told her that she was no longer cooperating and that they can no longer assume she was doing nothing wrong.

Rubio says the police officers then told her they would return with a search warrant and if she wasn’t home when they returned they would “break down the door.”

“I was definitely super anxious at first, since they said they would show video of me,” says Rubio. “I was just concerned that they were going to come back with a search warrant.”

She has since retained a criminal defense lawyer, and after consulting with them, says she has come to the conclusion that police were trying to intimidate her. She believes they wanted to suppress her side of the story, and that police officers possibly wanted her phone.

“I feel now even more that they are trying to get those videos,” she says.

Rubio shared her videos with CP, and they show the police possibly taking photos of her recording the action, as well as police apparently spraying mace on a person kneeling in an alley with their hands up. (The mace incident can be viewed at the 1:04 mark of the video below.)

Rubio says she has submitted her video footage to Pittsburgh Citizens Police Review Board, which has opened up an investigation into the incident.

Pittsburgh Public Safety spokesperson Chris Togneri sent a statement to Pittsburgh City Paper saying the department “wouldn't comment on any ongoing investigation” and that if charges are filed, all of the information would be in the criminal complaint.

Togneri reiterates the claim made by Commander Lando that objects were being thrown from the balconies in the first couple minutes at police officers.

Another resident who says she was filming the march and events on Centre Avenue tells CP she was also accused by police of throwing things from her balcony. This woman asked to remain anonymous but said she is a Black woman employed as a caretaker for the elderly. She has also been photographing the Pittsburgh protests as a freelancer. She said she is an “East Side” resident. There are several high-rise apartment buildings along Centre Avenue in between Negley and Euclid avenues.

She says she was awoken around 8 a.m. yesterday by banging on the door. When she opened it, she says the police demanded to be let in and then accused her of throwing objects at police during Monday’s event. She says she has been taking photos from her porch daily of all events in the neighborhood for a series she is working on.

After 15 minutes of asking to be let in, she obliged. She says they didn’t provide a search warrant. She says they didn’t find anything illegal or suspicious, and then left telling her that she “shouldn’t be filming or photographing these things right now.” She has also contacted a lawyer.

Today, Pittsburgh Mayor Bill Peduto called for full, third-party investigations by the Office of Municipal Investigations and the Citizen Police Review Board into the protests that occurred on Monday evening in East Liberty.

“For the past 36 hours, I have studied best practices of less lethal crowd dispersion, I have read countless comments on social media and viewed first-hand video, photographs, and accounts,” says Peduto in a press release. “The Public Safety Director provided me with the written official transcripts of all Command operations during that day and I have talked with every person in the Command rank who was on the ground or in the Command Center. Without question, there is a difference of opinion about what happened that day and the appropriateness of the actions of the Pittsburgh Bureau of Police.”

Critics of Peduto applauded the decision to open an investigation, but also pointed out that Peduto participated in a press conference on Monday night with police and public safety officials, and repeated many of the claims that police were hit first, which critics dispute. Critics are also calling on the mayor to release the transcript of the police communications made during the Monday protest.

Peduto says he also asked the ACLU, the NAACP Pittsburgh branch, and the U.S. Attorney’s office to assist on the CRPB investigation. Pittsburgh City Councilor Deb Gross (D-Highland Park) is also supportive of an investigation into Monday's protest, calling for one yesterday.