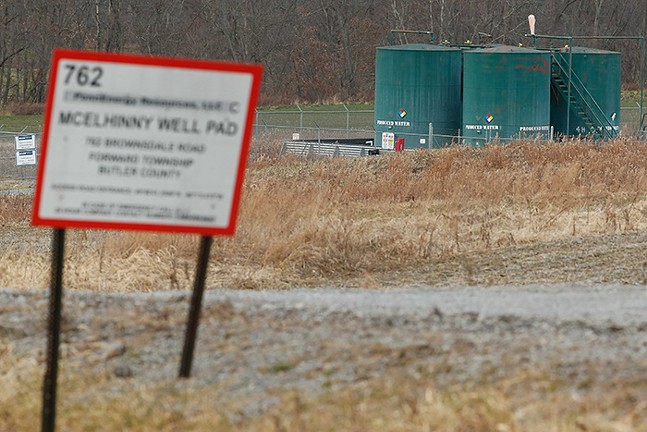 CP photo: Jared Wickerham
A horizontal well for a natural gas drilling site in Butler County
While still recovering from the Great Recession of 2008-2009, natural gas drilling — aka fracking — appeared in the Pittsburgh region and claimed to be able to offer economic relief. One of the first major energy players to move into the Pittsburgh region and greater Appalachia was Range Resources. The Texas-based oil and gas company claimed that fracking would lead to economic benefits beyond just those made from extracting natural gas.

In an October 2012 commercial, Range Resources claimed Pittsburgh is the place “where manufacturing will become American again” and ends with the tagline, “Drilling is just the beginning.” Those manufacturing gains never materialized, and the Pittsburgh region has lost several thousand manufacturing jobs since 2012.

And according to a new report from the Ohio River Valley Institute, that was just one of several failed economic promises natural gas companies made to the Pittsburgh area, Appalachia, and the Marcellus and Utica Shale region.

A press release for the study references how natural gas companies published economic impact reports claiming that Pennsylvania, Ohio, and West Virginia would see 450,000 new jobs thanks to fracking. But according to ORVI’s report, 22 counties that saw significant fracking only saw job figures increase by 1.7%, while jobs nationally grew by 10%.

ORVI is an independent, nonprofit think tank based in Johnstown and focused on issues specifically impacting Appalachia, and the think tank analyzed data from the U.S. Bureau of Economic Analysis from 2008-2019. The report, titled "The Natural Gas Fracking Boom and Appalachia's Lost Economic Decade," also notes that there was significant economic growth in these fracking counties, but that it didn’t directly translate into job or population growth.

Sean O’Leary of ORVI was the principal author of the report. He said in a press release that it was disappointing to see such meager job growth for these affected counties come at a time when fracking was operating at full capacity. From 2008-2019, the 22 counties’ rate of Gross Domestic Product growth more than tripled that of the U.S. as a whole.

“If nothing else does, that fact alone should persuade the region’s policymakers that they need to explore other, more sustainable economic development opportunities,” said O’Leary.

These findings are similar to a 2020 study out of Penn State University that showed rural Pennsylvania school districts experiencing fracking had lower per-pupil revenues, income, wealth, and tax revenue than similar districts without fracking.

These Pennsylvania fracking counties did see a 4.5% gain in jobs, but that was slightly below the state average of 4.6% during the same time period. And the population of those counties shrunk by 1.4% during that period. This also came when GDP growth in Pennsylvania’s fracking counties was two and a half times that of the nation and more than four times the state’s rate of growth. Basically, fracking did boost the economy of those regions, but it wasn’t translated into sustainable job growth, nor did it rebound the communities with fracking nearby.

Washington County was the only Pennsyvlania fracking county in the study to see job growth and personal income gains that exceeded state and national averages, but the report says the county is an outlier. For example, Greene County only saw a 0.1% job increase from 2008-2019. Other Pittsburgh-area counties weren’t even included in the study because fracking didn’t make up a large enough percentage of their GDP.

The report notes that parts of Washington County are suburbs of Pittsburgh, and it has a significantly larger and more diverse economy than the other fracking counties. Just across the Allegheny County border, Washington County has several large office parks, filled with white collar jobs and corporate headquarters. Peters Township is just across the border of Allegheny County and has one of the highest median household incomes in the entire region. The report notes that the “Mining, Quarrying, and Oil and Gas Exploration” sector is only responsible for 19% of Washington County’s GDP, and it represents less than 5% of the county’s personal income.

“This report explodes in a fireball of numbers the claims that the gas industry would bring prosperity to Pennsylvania, Ohio, or West Virginia,” says Hanger in a press release. “These are stubborn facts that indicate gas drilling has done the opposite in most of the top drilling counties.”

OVRI's report runs counter to many claims made by the fracking industry and its boosters. Republican candidates like Sean Parnell and Donald Trump repeatedly claimed that efforts to end fracking would result in hundreds of thousands of job losses. Those claims were widely inflated, and this OVRI report counters them by showing many counties lost jobs, even when fracking was in full swing.

Susquehanna County in Northeastern Pennsylvania is a stark example of this. Even though its GDP grew nearly 300% over 2008-2019, the county’s job growth was below state and national averages, and it still lost 1.3% of its population. Greene County, just south of Pittsburgh, saw a GDP growth of about 25% — which was higher than Pennsylvania's average. But the county home to Waynesburg added virtually no jobs and lost 8% of its population.

“It’s disappointing that this report was necessary to open people's eyes to the realities of the economic impacts of the natural gas boom because you only have to look at what has happened to the downtowns in Bellaire, Steubenville, Wheeling, and Waynesburg to know that jobs and incomes haven’t been growing,” says ORVI director Joanne Kilgour in a press release.