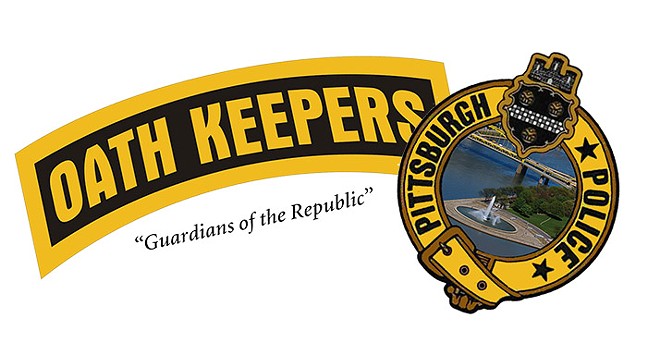 According to a report in Rolling Stone magazine, a Pittsburgh Police officer used his department email to sign up for the Oath Keepers, an anti-government extremist organization.

The Southern Poverty Law Center says the Oath Keepers are a group that claims to defend the U.S. Constitution, but the entire organization is “based on a set of baseless conspiracy theories about the federal government working to destroy Americans’ liberties.” SPLC has designated them an extremist group, and the Oath Keepers are known participants and organizers in the Jan. 6 insurrection on the U.S. Capitol.

Nothing in the Oct. 26 Rolling Stone report indicates that the Pittsburgh Police officer who joined the Oath Keepers participated in the Jan. 6. insurrection, but the report says the officer did attach a note to his membership request highlighting his experience as a firearms instructor, and added that he would “spread the word to my students.”

When reached, Pittsburgh Police spokesperson Cara Cruz said Pittsburgh’s Public Safety Department “is aware of the matter and the Office of Municipal Investigations is conducting an internal investigation.”

According to USA TODAY — which released the names of dozens of U.S. law enforcement officers who are members of the Oath Keepers following Rolling Stones' initial report and a day after City Paper's story was first published — the name of the Pittsburgh Police officer who messaged the extremist group is Lt. Philip Mercurio.

Pittsburgh Police confirmed Mercurio’s employment to USA TODAY. When reached by the newspaper, Mercurio was reported to have hung up on their reporter and did not reply to messages seeking comment. Pittsburgh officials told PublicSource that pending the investigation, Mercurio has been reassigned to an "administrative assignment."

Mercurio has been a Pittsburgh Police officer since 1988. He was promoted to lieutenant on March 12, 2020, according to a press release. It’s unclear exactly when Mercurio sent an email to the Oath Keepers. According to 2020 salary information, Mercurio had a base salary of $93,895, and made a total 2020 compensation of $129,729 with overtime and bonuses.

The revelation has garnered criticism from local groups who have been critical of Pittsburgh Police actions over the years, and from national extremism experts. An investigative researcher at the Center on Extremism, which houses the Anti-Defamation League, told Rolling Stone that the revelation was “really alarming.” One local group told Pittsburgh City Paper that the Pittsburgh Police employing such an officer, let alone one who trains others in firearms, is “extremely concerning” and should lead to more oversight within the department.

Oath Keepers were formed in 2009 by Steward Rhodes with a mission to defend the U.S. Constitution from perceived, unrealized threats from the government. The group has been known to have current and former law enforcement officers as members. Oath Keepers have made appearances at protests across the country following police killings of Black civilians in 2014, 2015, and 2020, during which heavily armed members of the Oath Keepers were seen on rooftops in what they said was an effort to protect businesses from alleged riots. Members of the group also carried out similar activities for businesses that reopened against COVID-19 public health measures, and patrolled locations during the 2016 and 2020 elections to discourage and report alleged “voter frauds.”

CP Photo: Jared Wickerham
Pittsburgh Police officers
Several Oath Keepers have pleaded guilty to charges related to the group charging the U.S. Capitol on Jan. 6, and court records show that Oath Keepers were among the most organized and coordinated of the hundreds charged in connection with the Jan. 6 insurrection.

The list of purported Oath Keeper memberships was obtained through a hack and leak by the transparency group Distributed Denial of Secrets. Of the 38,000 names in the membership rolls, Rolling Stone identified nearly 40 members linked to public-sector work emails such as city.pittsburgh.pa.us. There were several former and current law enforcement officers in the leaked list. According to an Oct. 1 BuzzFeed article, one police officer in Ferndale, Wash. who was on the list has been sued at least twice for allegedly committing civil rights and use of force abuses while in uniform. The next week that officer was placed on leave.

Quinn Cozzens, staff attorney at the public interest law firm Abolitionist Law Center, says the inclusion of a Pittsburgh Police officer in the report of purported Oath Keepers is extremely concerning, especially if that officer is interacting with the public. Cozzens says the Oath Keepers are known for picking and choosing which Constitutional rights align with the group’s far-right, extremist views, and that a Pittsburgh Police officer potentially sharing those views shouldn’t be tolerated within the department.

“That should be an essential part of being a police officer,” says Cozzens. “There should be no question that they should be expected to, and need to respect all of people’s Constitutional rights.”

The Abolitionist Law Center has criticized and sued the Pittsburgh Police department over its use of force, particularly for cases involving police violence against Black Lives Matter protesters in 2020.

Cozzens says this report should motivate the Pittsburgh Police department to conduct more and better screening for officers who share extreme views, since they directly counter their duty as officers. He says the Oath Keepers also have ties to white supremacist idealogy.

“I think it is incumbent on all city police departments to root out any inkling of white supremacist or far-right views from those in their ranks,” says Cozzens.

According to the Washington Post in 2017, Oath Keeper leader Rhodes seemed to be concerned about being associated with white supremacist movements at that time, and he spoke out against racism as well as the alt-right then.

Robert Swartzwelder, the president of Pittsburgh's police union, told PublicSource: “I don’t know what he’s being accused of” when asked for comment on the USA Today report regarding Mercurio, and when asked about the prospect of an officer being involved with the Oath Keepers, he said, “I don’t know who they are.”

However, other local groups who are critical of the Pittsburgh Police department see the report of an Oath Keeper potentially in the department as evidence of wider extremism in the region’s police force.

"News of a Pittsburgh Police officer with ties to the Oath Keepers is unsurprising, not only because of the preponderance of racist, fascist groups throughout Western Pennsylvania, but because of the origins of policing itself as a white supremacist institution built on a legacy of strike breaking and slave catching,” reads a statement from the Pittsburgh chapter of the Democratic Socialists of America. “The ever-increasing power and money directed to police and the rise of racism and fascism aren’t accidental. The police have become an extra-judicial force, tasking themselves with the role of maintaining a very specific type of order. This isn’t a new phenomenon; one doesn’t have to look very hard to see historical examples of the police working with white supremacist groups.”
Editor's note: This story has been updated on Thu. Nov. 4 to add in additional information from a USA TODAY report that names the Pittsburgh Police officer who sent a request to join the Oath Keepers.