The number of uninsured children in Pennsylvania has grown slightly over the last three years, matching a nationwide increase that’s wiped out the progress the nation made when it reached a historic low in 2016, a new report has found.

After reaching a national low of 4.7% in 2016, the rate of children without insurance began to gradually creep back up again starting in 2017. By 2019, the uninsured rate had risen to 5,7%, or an increase of 726,000 children, according to the study by the Center for Children and Families at Georgetown University’s Health Policy Institute.

According to the study, “much of the gain in coverage that children made as a consequence of the Affordable Care Act’s major coverage expansions implemented in 2014 has now been eliminated.”

As our sibling site, the Ohio Capital Journal, reports the study attributed declines in Medicaid enrollment as the start of the decrease in insured children. Public coverage for children includes Medicaid and the Children’s Health Insurance Program (CHIP). 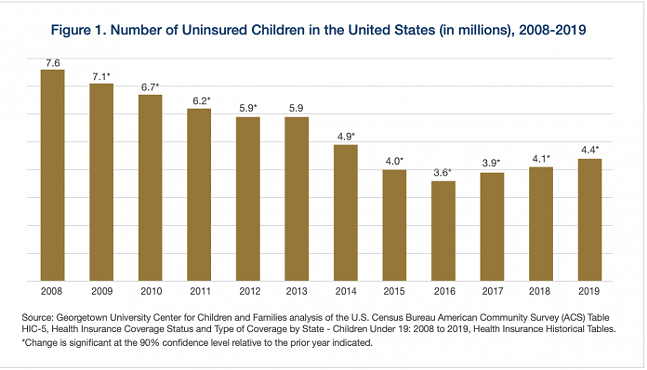 Courtesy of Georgetown University, Center for Children & Families
In Pennsylvania, there were 126,000 uninsured children in 2016, before the dawning of the Trump era, putting the state 46th nationwide, the study found. By 2019, that number had grown to 128,000, with the state rising to 44th place nationwide.

In percentage terms, the Keystone State’s uninsured rate grew from 4.4% in 2016 to 4.6% in 2019, the 23rd highest rate nationwide, the study found. All but two of Pennsylvania’s neighboring states also charted increases in the three-year period between 2016 and 2019, the study found.

Texas and Florida had the highest uninsured rates, representing 41% of the overall increase in child non-coverage, with about 1 million children in Texas lacking health insurance in 2019, and an estimated 343,000 uninsured children in Florida, the Capital Journal noted.

Courtesy of Georgetown University, Center for Children & Families
“The rate of uninsured children (as opposed to the number) is an important indicator to examine how states are doing in comparison with each other and accounting for relative size,” the report reads. “As a whole, the country experienced a 1 percentage point increase in the child uninsured rate during the three-year period, with 26 states seeing statistically significant change on this measure. In total, 29 states experienced a statistically significant adverse change in rate or number during the three-year period.”

The largest national increase in uninsured children, 320,000, came between 2018 and 2019, and represents the largest annual jump in more than a decade, the authors of the study said.

“Moreover, since this data was collected prior to the pandemic, the number of uninsured children is likely considerably higher in 2020, as families have lost their jobs and employer-sponsored insurance, though it is impossible to know yet by precisely how much,” the study stated.
John Micek is the editor of the Pennsylvania Capital-Star, where this story first appeared.