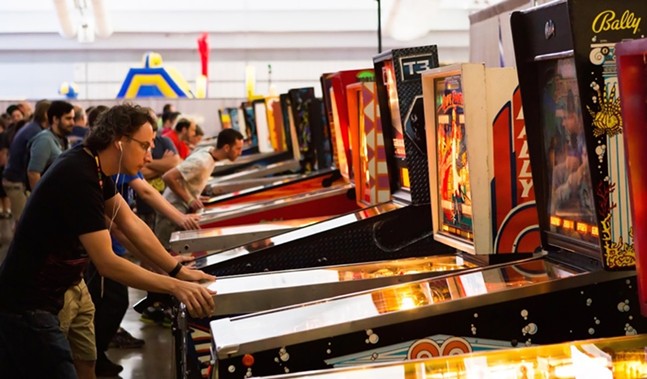 The Knights signed a multi-year partnership to co-produce Replay FX (Aug. 1-4). The deal serves to expand the event— which already features hundreds of full-sized pinball machines, arcade games, and video game consoles, as well as the largest pinball tournament in history—into esports competitions and tournaments.

“Adding esports to Replay FX is the natural progression of our event and will be widely embraced by all attendees and staff,” states Replay FX director, Mark Steinman in a press release. “Esports enables Replay FX to offer gamers both a new type of challenge and new forms of entertainment value that can only be produced through live competition.”

For the less video-game savvy, esports are competitions between professional players and teams that revolve around multiplayer video games like Halo, Call of Duty, and Fortnite. Around ten years ago, it saw a rise in popularity and has since become a fast-growing, multi-million dollar industry (one 2018 Forbes article estimated that the global esports market could reach $1.65 billion by 2021).

Founded in 2017, the Knights is the official esports team of the city, and describes its goal as creating “quality engagement with the local community, the online community, and the esports community at large.” As part of that, Knights pro players and influencers plan to appear at Replay FX.

“Every gamer in Pittsburgh knows about Replay FX,” states Knights president James O’Connor in a press release. “It’s a huge event and we’re excited to partner with the Replay FX team and work to grow and unite Pittsburgh’s gaming community."

Steinman hopes that working with the Knights marks a “step toward becoming one of the top-tier gaming events in the world."

“[Our] ability to produce the largest video game and pinball arcade in existence, combined with the exciting aspects of modern esports competitions... captures the attention of gamers through both a sheer quantity and diverse quality,” says Steinman.