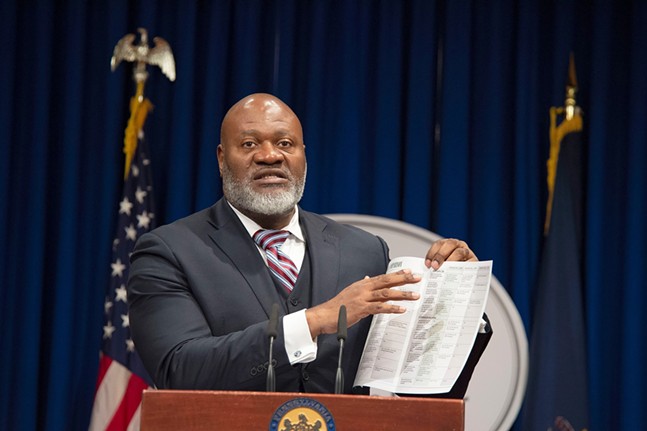 Courtesy of the official Facebook page of Rep. Jake Wheatley
Today, state Rep. Jake Wheatley (D-Hill District) announced a bill that would legalize recreational marijuana and include “clean slate” provisions, which would expunge the records for people charged with non-violent, cannabis-related offenses.

Wheatley introduced a similar marijuana bill in 2018, but he says it never even made it to the state House floor because “there are still some whose ideology keeps them from allowing Pennsylvania to have such an important bipartisan conversation,” Wheatley wrote in a memo about the new bill last week.

Along with his proposal, Wheatley released a report about his marijuana bill, citing both the popular statewide support for its legalization (58% of Pennsylvanians support, according to an October 2019 Franklin & Marshall poll), as well as the high numbers of people arrested for minor marijuana offenses (610,000 Americans in 2019).

“With one bill, we can accomplish a great deal here in Pennsylvania: undo the damage that’s been caused for over 40 years by an overzealous criminal justice system intent on criminalizing people for minor drug offenses, and create a comprehensive marketplace to legally sell cannabis to adults,” said Wheatley in a press release. “A portion of the funds will also provide revenue to invest in programs to help revitalize and strengthen our disadvantaged communities.”

Wheatley’s report lays out the provisions of House Bill 2050, and how it compares to past proposed marijuana bills HB 1899 and SB 350, with the biggest differences in the plans for permits and tax revenue. Wheatley’s bill allows for permits for independent and craft growers, which would be overseen by the state Department of Health, the same department that oversees medical marijuana. HB 1899, which was introduced in 2019, proposed recreational marijuana sales as a state-controlled business, much like the sale of liquor.


The @RyanDeto article details a survey reporting 86% of patients were white, 5% were American Indian, and 4% were black.https://t.co/lOS8rAF99j

The bill also creates a Commonwealth Reinvestment Fund, which would funnel revenue of recreational marijuana sales into various state programs, including grants to women and minority-owned marijuana businesses, funds for a student-loan reimbursement program, a mixed-income housing program, and an after school program. Previous bills did not include any of these programs.

HB 2050 would decriminalize marijuana possession and would allow for the expungement of records for those with past marijuana offenses, and for the release of inmates currently serving for marijuana offenses, within 60 days of the bill’s passage (previous bills called for 7-12 months).

In his announcement, Wheatley also cited a January Pittsburgh City Paper article about the statistics behind who uses medical marijuana and for what conditions According to surveys conducted by Compassionate Certification Centers, 86% of medical marijuana patients in Pennsylvania are white, and 4% are Black.

“We have a vibrant medical marijuana program, and we have tons of citizens who are unable to access that. Our minority citizens aren’t accessing our medical program at the same rate as everyone else is,” Wheatley said when introducing the bill in front of the assembly.

“No matter where we go with adult use, there are worthy discussions for us to have around criminal justice and social justice reform.”