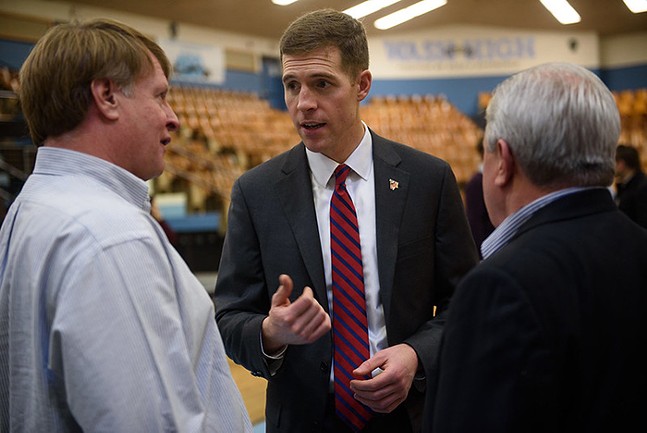 Photo: courtesy of Lamb's campaign Flickr
Conor Lamb (center) speaks with Allegheny County Executive Rich Fitzgerald
U.S. Rep. Conor Lamb (D-Mt. Lebanon) is a well-known ally of the natural gas fracking industry and the building trades unions that make up its workers. He has criticized politicians who want to limit or ban fracking, drawing the ire of environmentalists and other progressive groups in Pennsylvania and beyond.

But one area where Lamb is emerging as an ally to environmentalists is in efforts to reduce methane emissions. Fracking infrastructure can leak copious amounts of methane, a greenhouse gas that is several times more potent than carbon dioxide. In 2018, a fracking well just 60 miles from Pittsburgh exploded and leaked more than 57,000 metric tons of methane over 20 days.

On March 25, Lamb introduced a resolution in Congress to overturn a rule instituted by the Trump administration that weakened methane and volatile compound emissions. Lamb, along with Reps. Diana DeGette (D-Colo.) and Scott Peters (D-Calif.), want to overturn the rule.

According to a press release, the Trump rule was opposed by environmental groups, labor unions, and prominent oil and gas companies alike because leaking methane is both wasteful and destructive. On March 26, the natural gas industry group Interstate Natural Gas Association of America advocated for Lamb’s resolution saying it is part of the goal of the industry to lower methane emissions, and argues a “stable regulatory framework will allow the industry to invest in the critical infrastructure necessary to reduce emissions.”

In an interview with Pittsburgh City Paper, Lamb says he has always believed the country should have a natural gas industry, but that “it has to be well regulated.” He notes methane is more potent a greenhouse gas than carbon dioxide.

“That is where I disagreed with Trump,” says Lamb. “[That methane rule] is dangerous, it’s bad for the workers and the wells, and it’s bad for climate change.”

Lamb says reinstituting the methane emission rule from the Obama administration has support from big energy companies like Chevron, labor unions that work in fossil fuels, and environmentalists. “This is a good case of where business and environmentalists and labor are on the same side,” says Lamb. “It makes common sense.”

He says the resolution, which only needs a simple majority in both the House and Senate to be approved, would lead to more inspections of natural gas infrastructure like pipelines and wells, adding that it would lead to more jobs for qualified professionals.

According to an interview with the Pittsburgh Post-Gazette, Lamb has also been speaking with President Joe Biden’s administration about a plan to hire workers to plug old and abandoned gas wells. Lamb says this plan is separate from his push to reinstitute the Obama-era methane rules, but adds that plugging wells is important in reducing methane emissions. Even abandoned natural gas wells can leak significant amounts of methane.

While environmentalists and others believe plugging wells should be used as replacement jobs for a natural gas industry currently facing economic hardship, Lamb says he is bullish on the natural gas industry making a comeback soon. (Economists have mixed opinions that natural gas will rebound.) Eitherway, Lamb says his support for creating jobs through capping natural gas wells doesn’t mean he wants capping jobs to replace jobs building pipelines or building cracker plants. He says he supports both.

Lamb adds that another issue he supports are investments to better methane sealing. He says this is going to take new technology.

“This is something that we are gonna work on. I have been talking to the Biden admin about the best way to make this happen,” says Lamb.

Biden is visiting Pittsburgh next week to talk about his support for a multi-trillion dollar infrastructure bill. Lamb says he is glad that the region's infrastructure needs are finally getting addressed.

“A lot of infrastructure in Western Pennsylvania is old. Whether it's pipes or old wells, or old schools with asbestos,” says Lamb. “I am happy the president is focused on this in a way the previous president really wasn’t.”