“I like touching people to the point of moving them to action, or to tears, or to laughter.” 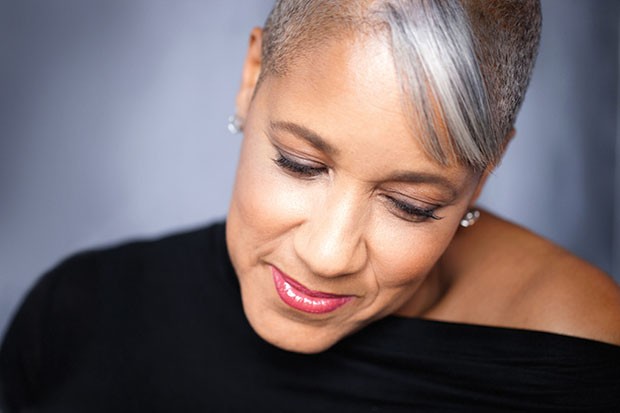 René Marie is the type of singer who elicits a strong reaction from listeners, and sometimes it’s been controversial. At a civic event in Denver, she was asked to sing the National Anthem. Marie performed a version from her suite “The Voice of My Beautiful Country,” which trades Francis Scott Key’s lyrics for those of “Lift Every Voice and Sing,” a song that is often called the “Black American National Anthem.” Then there’s her steamy side. Her salute to Eartha Kitt, I Want to Be Evil, exudes sensuality and power, much like the legendary actress/singer who once played Catwoman on TV’s Batman.

Song of Red, Marie’s most recent album, takes things to an even deeper level. Her first all-original set blends jazz melodies with the scope of singer-songwriters, creating stories rich with characters. Songs like “Lost” and “This Is (Not) A Protest Song,” the latter dealing with homelessness, practically ask listeners to treat each other with more understanding. “I like touching people to the point of moving them to action, or to tears, or to laughter,” Marie says by phone.

Though Song of Red was released more than a year ago, her words sound especially relevant today. “I can’t help but think of our political environment that we’re living in right now. There’s so much division, assumptions made about people, and very strong emotions,” she says. What’s important is “just having empathy for people and trying to remember that things are never black and white. There are so many shades of gray.”

“Blessings” drives this home, closing the album like a gospel hymn, its lyrics full of benedictions that unite listeners. “When we do that song live, it hits me that everybody in this room doesn’t have the same political viewpoint. So what has brought us together?” Marie asks. “It’s the music. And if something were to happen to one person in the room, if someone were suddenly choking, everybody in the room would be anxious about that person’s well-being. And that’s the real us. That’s what I want to take away with me, and bring with me to the next gig when I first step out on the stage and look into those faces.”

Marie utilizes the chops of a jazz singer, but her material reaches beyond the category. Along with clever mash-ups like Ravel’s “Bolero” with Leonard Cohen’s “Suzanne,” she’s also blended the controversial Southern song “Dixie” with Billie Holiday’s intense “Strange Fruit.” If this blend of jazz, pop and activism recall the great Nina Simone, that’s no surprise. Simone’s use of “music as a platform to protest,” inspired Marie, who didn’t begin her professional career until she was in her 40s.

But coming into music later in life, Marie understands how her performance can affect listeners. “I think if we put our hearts in our music, then it’s going to do that,” she says. “If we take it out of the head and move it into the heart and give it from there, it’s going to touch people.”