I was taunted by the Big Wink. 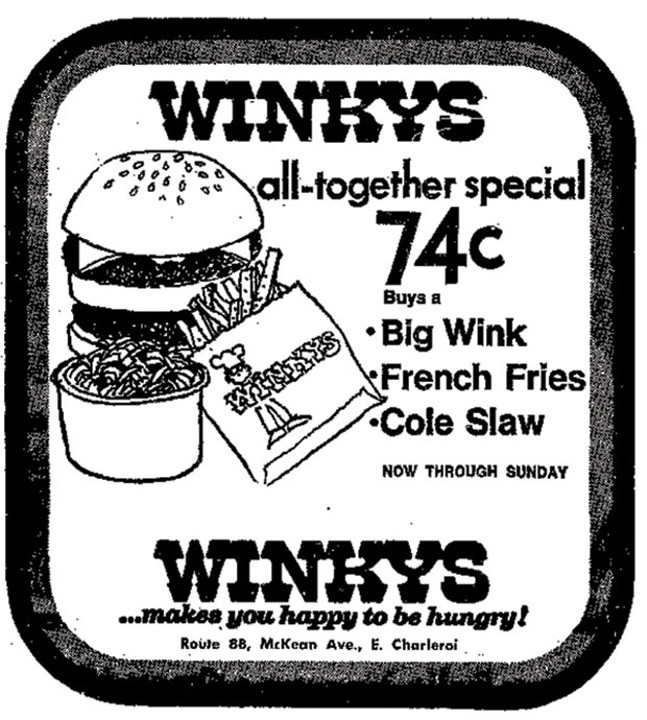 From May 13-19, City Paper will be hosting its second annual Pittsburgh Burger Week at participating restaurants.

I’ll be honest, there are some good-looking burgers being featured in this year’s event. Burgers, like a lot of the food and drink we enjoy today, have been elevated to miniature works of art. The burgers often contain several kinds of meat, most of it is grass-fed, free-range or raised in a pollutant-free meadow in Finland, guarded by angels. A burger revolution has been going on in this country and in this city for a decade or more.

But, I have to admit, it made me nostalgic for the region’s burgers of old. There were no designer burgers back then; starting in the late 1970s, the biggest innovation was adding bacon. Also, back in “them days” we ate hamburgers, although to my knowledge they contained no ham. In fact, a modern burger is the one more likely to contain ham or elk or buffalo or unicorn.

I sat down and started making a list of the burger joints that I remember as an adolescent of the late '70s and early '80s. By the time I was done, there was a clear winner, Winky’s. The first Winky’s opened in Sewickley, Pa. in 1962. It then spread like wildfire across the region. By the late '70s, there were 40 stores in three states.

My love affair began the night my parents pulled into the Winky’s outside of East Liverpool, Ohio, late one night on the way back from my grandmother’s house in New Castle. I remember getting a cheeseburger, fries and a “Winkyshake.” It was literally the best food my 6-year-old taste buds had ever experienced. My dad, I remember, had something called a “Big Wink;” it was beautiful, almost statuesque. I knew, at that moment, that I had to have it.

I was taunted by the Big Wink. My mom said it was too big for a child to eat. Winky’s also ran these poorly done commercials to help with the hype. Its mascot was a pinkish, hairy, derelict puppet that looked like it had been recently fired from the cast of Sesame Street. His name was Winker and he was always hawking that Big Wink.

Within a year though, Winky's locations were disappearing left and right, and by 1982, Winky’s was nothing but a memory, a torturous lament. Oh, how I wish Winker was still around to see what the world of cheeseburgers has become. This week, as I check out the Burger Week selections, I might have to pour out a little of my beer in memory of the Big Wink.