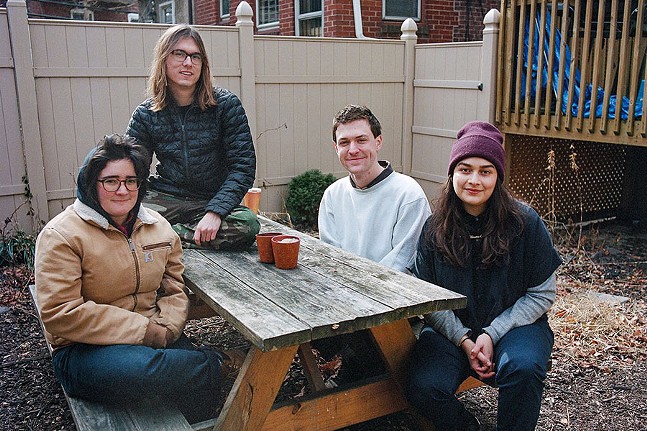 After 2014's stomping Sunchokes and 2015's power-pop-pelter All of Something, the then-college rock band Remember Sports (fka SPORTS) almost decided to call it quits upon graduation. Thankfully, the quartet skirted a premature demise by relocating from Ohio to Philly, solidifying a permanent lineup, and making its best album to date.


Slow Buzz, which was released last year via Father/Daughter Records, is the group's unmistakable breed of twangy, fuzzy power-pop in both its most condensed and expansive forms yet. Their signature, thrashing rhythms and howling hooks are tighter than ever on tracks like opener "Otherwise" and lead single "Up From Below.” Others feature auxiliary percussion (as well as synths, trumpets, banjos, and even steel) that push Remember Sports beyond their trample-pop comfort zones.


Frontwoman Carmen Perry recites her version of the twenty-something experience in a way that’s both pleasantly relatable and deeply personal. However, it's not always what she's singing, but how she's singing it that's so uniquely stylized. She writes almost exclusively in couplets, and her geographically unplaceable drawl—accentuated most when she's wailing a sticky hook—gives her lines a strong sense of personality that only grows fonder on the ears with every listen. After a couple play-through's, you can imagine a line like, "we spent our whole life wishing we were elsewhere / and now that we're gone, we're just trying to get back there," just casually slipping out of her during a late-night porch conversation.


As brazen as her narratives can be (Slow Buzz is a breakup record, after all), there's a warmth to Remember Sports' music that's rarely radiated by bands who rock this hard.


City Paper caught up with Perry before Remember Sports’ show at Mr. Roboto Project on 2/7. Read the full Q&A below:


The first stop of your tour with Jeff Rosenstock and Joyce Manor was last night. How does it feel to be on tour with bands of that scale?


It was good; they’re bigger places than we’re used to playing. We’ve been doing a headlining tour for almost a month so the switch has been funny cause we’re playing bigger places and it’s, like, more real now.


What have you done to adjust your set to play these huge venues with a lot of people?


it was funny, last night there was, like, a curtain over the stage. So we went to get ready right before we played, and we gave the ‘OK’ and they just opened the curtain up. We kind of just laughed. It’s not so different, I when it comes down to it. You’re still just playing—I don’t know, I close my eyes a lot when we play so it doesn’t really matter to me.


Do you think you prefer playing a big venue or do you still like playing a tiny little space?


pros and cons. It’s nice in a tiny space when it feels like you can connect with people more easily, there’s less of a barrier. So I definitely appreciate doing that. And we’ve played a variety of sized venues on tour so far this month—some of them were small and some of them were, I mean not as big as the Joyce Manor ones but bigger places.


Big places are just fun cause who wouldn’t want to play to a lot of people? But I still enjoy talking to people after, or before.


Your songs on the first two records were super short, so it was probably pretty easy to play most of your discography in a half-hour set. But now that you have some longer Slow Buzz songs, is putting together a a difficult task?


Not really, there’s a lot of older songs that we just don’t really practice anymore cause we don’t play them. some songs I feel like we’ve sort of outgrown. We’re excited about the new ones, and there’s obviously some old ones that we still love playing. I think certain songs are easier to let go than others.


Which ones, in particular, do you not care to play anymore?


When we wrote the first album I was like 18 for some of them, even some of the songs on All of Something I had written way before. And yeah I’m 25 now, so certain songs for me, the feeling just isn’t there anymore. It’s not something that I can relate to and it feels disingenuous to ... I don’t know, some songs I feel l can’t really connect to anymore. And some old songs—we love playing “Tiny Planets,” we’ll always play that one. “Saturday” we play. Those feel more timeless to me. Maybe not timeless—I don’t know maybe I’ll feel differently later in life.


What about a song like “Clean Jeans”? That was one of your most popular ones when it came out.


We don’t play that one a whole lot. I think I wrote that song from a place of anger, which is not really usual for me [laughs]. So that one I find I have trouble connecting with still, but I appreciate it as a song. I appreciate the emotions that pushed me to write it. That’ll always be special to me but it just doesn’t feel the same playing it.

So is playing songs that you feel represent how you currently feel something that’s important to you and your band?


Yeah, not always exclusively. Obviously, I don’t feel the same way about everything I’ve written in the past. Some songs I can still find something to hold onto and some songs I can’t. It’s important to all of us to be able to connect with what we’re playing. Certain songs we’ll be like, hmm we haven’t played this one in a while, we’ll practice it. We recently started playing “I Liked You Best” again, off of Sunchokes. And then other times we’ll try that and be like, “hm that didn’t work, that doesn’t feel good.”


I’ve always really liked that you sing with sort of a drawl, and your music has a to it that’s almost, in a good way, sort of country-ish or Southern-. I was wondering if any of that is a conscious influence?


I don’t know if I would call it conscious but I definitely grew up listening to a lot of country music. My mom’s actually from Texas, and my dad is not. He has really good taste in music and was always playing Lucinda Williams and Stevie Nicks. He listens to a lot of great, female country artists I guess you would say. And that sort of has always stuck with me. I really love country music and I love Dolly Parton. I feel like that’s a style of music that I don’t feel like I’ll ever be a country artist, but it seems like something that’ll stick with me.


I think one of the reasons your songs are so catchy is because you write in a lot of , in rhymes. Is it ever challenging to find rhymes that work with the song or is that just the way you feel comfortable writing?


I try not to worry too much about rhyming and I guess sometimes I do too much. There’s one song on the new album where I rhyme sad and bad. And I was talking to Catherine about it recently, who plays bass, and I was like, “yeah no it’s supposed to be a bad rhyme.” And she’s like, “yeah in a poetry class I took once they were like, intentionally bad rhymes are still just bad rhymes.” And I was like, “oh wow, okay cool.” [laughs].


Are there any specific musicians who informed the way you write your lyrics, specifically?


Whenever I think about that I kind of just think the way that I write songs, and music, and lyrics, and stuff is just one big conglomeration of every artist that I’ve loved a lot. When I was in high school Rilo Kiley was super important to me. P.S. Elliot. I listened to her a lot when I first started writing music so I think a lot of my earlier solo stuff was kind of just a copy of her. I hope now I’m not so much a copier, I’ve found a way to make it my own. That’s my goal, I guess [laughs].


One of my favorite lyrics you’ve ever written is, “We spent our whole lives wishing we were elsewhere / and now that we’re gone we’re just trying to get back there.” What’s the story behind that one?


I wrote that song as my mom was packing up my childhood house to sell and move away from. And she doesn’t live where I grew up anymore, and that was sort of just a thought about how as a teen growing up in the suburbs, I couldn’t wait to be somewhere else. And now I don’t really have a place to go back to that’s like indicative of my childhood and that’s kind of sad.


So you clearly write a lot about your relationships with other people. Now that your band is bigger and you’re touring a lot, is writing about someone else something you worry about?


It is something I think about and it’s something I thought about less when I was younger because I didn’t know that I was gonna record or release anything. It’s harder now to find a balance between thinking about who’s gonna hear it, so much, and just trying to stay in my head and be true to the emotions. It’s something I am still learning how to focus less on. I think I’m starting to figure it out a little better.