So you’re working from home, or quarantined, or are otherwise scared to leave the house. Now what? It can be extremely difficult, especially when cooped up indoors, to avoid falling into a rabbit hole of reading/watching/listening to the news, endlessly scrolling through social media, and turning into a ball of anxiety and despair. It’s even harder to unwind and think about something other than a global pandemic shifting our understanding of life as we know it.

But it’s imperative to take a break and rest your fried brain, like with some good old fashioned television. While some deranged minds enjoy watching pandemic and disaster films like Contagion during this time, this list of recommendations contains content that is exclusively nice and soothing.


Paddington and Paddington 2
I recommend the Paddington movies often and with passion, but I don’t know if I’ve ever truly meant it until now. They can only be described as delightful, and make the world seem like a better, nicer, and more hopeful place. The films take the familiar story of a young bear from Peru who finds himself lost in a London train station and is taken in by the Browns, a family who navigate the challenge of living with a talking bear. Paddington is always getting into trouble, but he’s also always helping those around him. In the first film, he tries to escape the grip of an evil taxidermist, and in the second, he engages in prison reform after being arrested while trying to get a nice gift for his aunt. They’ll make you want to be a better person.

Paddington and Paddington 2 are available on Amazon Prime, YouTube, and other video rental platforms.


Bob’s Burgers
Set in a coastal Northeastern town, the show centers around Bob Belcher, owner of the aforementioned burger shop, his wife Linda, and his kids, Tina, Gene, and Louise. The family tackles obstacles from struggling to pay their rent to infiltrating a pseudo Brony convention to retrieve a stolen toy. It’s a sitcom that always has a happy ending, but never feels tired or relies on outdated jokes.

Grace and Frankie is streaming on Netflix.

Netflix
Nailed it!
Unlike most cooking competition shows where viewers root for chefs to speedily whip together gourmet meals, Nailed It! is a show for losers. It’s a baking show where all the contestants are not just amateurs, but overtly bad at baking. They have to recreate elaborate cakes and cookies to impress/horrify the judges. What makes the show so fun, and oddly heartwarming, is that there are no stakes and no real sense of competition. Host Nicole Byer is full of energy and ridicules contestants and their creations without embarrassing or patronizing them. Plus the fucked-up cakes are really a sight to behold. Bonus: There is Nailed It! Spain, France, and Mexico.

Nailed It! is streaming on Netflix.

Pasta Grannies
What could possibly be more comforting than carbs (other than an end to nationwide chaos)? This YouTube series travels different corners of Italy to meet grandmas who make pasta. That’s it. The women can be anywhere between the ages of 60 and 100, and make everything from spaghetti to regional pastas that only three people in the country know how to make. The videos are short, simple, and dedicated to one thing: watching older women knead flour and dough. 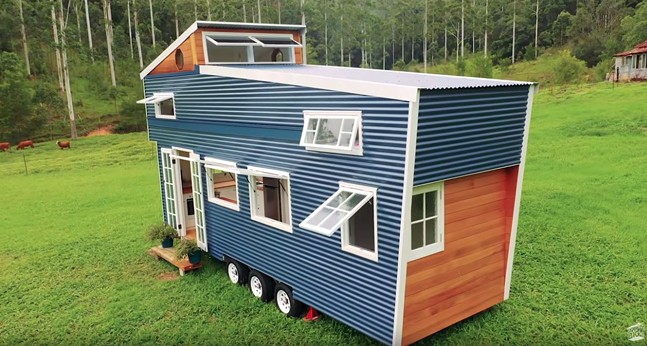 Screenshot of Living Big in a Tiny House
Living Big in a Tiny House
I’ve spent enough time hate-watching Tiny House Hunters to be disillusioned by the concept and branding of “tiny houses,” but for some reason, this YouTube show is calming. Hosted by a tall and gentle New Zealander, the show travels the world to meet people living in super-small homes. Everything is neat and tidy, and the homes seem like little utopias full of solar power and eco-friendly toilets, and big windows that open to the stars.

Screenshot of Bon Appétit
Bon Appétit
If you haven’t joined the BA hive, now is a great time. The videos from Bon Appétit magazine’s test kitchen are dually educational and enjoyable. They’re made by extremely likeable people who know way more about food than the average pedestrian, but they still feel relatable and doable (unlike when Ina Garten says “store-bought is fine” but you know she doesn’t mean it). A great starting point is the Gourmet Makes series that involves recreating popular snacks foods to great failure and success, and Making Perfect, where several staff cooks come together to make one perfect dish or meal.