"I wanted to tie it together knowing that those two are thought of as very different kinds of musicians." 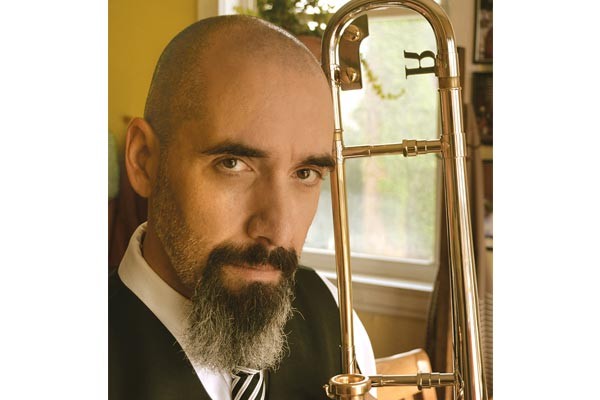 Trombonist Reggie Watkins has logged numerous miles with everyone from the late trumpeter Maynard Ferguson to singer-songwriter Jason Mraz. In addition to gigs with The Temptations, the West Virginia native and longtime Pittsburgher was part of Aretha Franklin's horn section at her Ohio State Fair performance this year.

Not surprisingly, his second album, One for Miles, One for Maynard, draws on an array of styles while paying homage.

"I wanted to acknowledge my influences," Watkins says. "Maynard being somebody I played with and spent so much time with, and Miles Davis, who I've listened to incessantly for years. And I wanted to tie it together knowing that those two are thought of as very different kinds of musicians." While some such projects might simply celebrate diversity for diversity's sake, the album works to present a whole picture of Watkins and his music.

Ferguson, who was known for his skill in the upper register of the trumpet, toured incessantly with his mid-sized Big Bop Nouveau Band. He found many band members in Pittsburgh, so when he was looking for trombone players, Watkins got a call. He not only fit in with the band, but within a year the trombonist also became its musical director. Known to everyone as "Boss," Ferguson was an encouraging leader. "He was like a grandfather type, but he treated all of us as peers. Even your first day in the band, he had a way of making you feel comfortable: ‘Okay, relax, play,'" Watkins says.

Though Ferguson got his start with jazz, he wasn't afraid to cross over into pop territory and incorporate influences from other countries. This solidified thoughts Watkins had from a young age. "He had a big influence on me, but I think it validated where I was already coming from," he says. "It was my tendency to be able to appreciate everything — as a listener, not just from an analytical standpoint."

To pay tribute to "Boss," Watkins reimagines the trumpeter's "Chala Nata" on the new CD. Originally based on an India raga, complete with sitars, it gets rearranged for guitar, giving it a Spaghetti-western feel, before it kicks into a backbeat worthy of James Brown, complete with turntable scratching. In addition, the piece retains its jazz pedigree with a five-piece horn section.

"Shhh," from Miles Davis' early electric period, has the moodiness of the original with a more modern groove. The album also features several originals by Watkins and saxophonist Matt Parker, who, like drummer David Throckmorton and saxophonist Rick Matt, also played in the Nouveau band.

Watkins, who lived in Austin, Texas for a few years, plans to keep Pittsburgh as his home base when he's not on the road. "I really missed the music climate here in terms of my affiliation with the jazz base," he says. "When I was living in Austin, I was coming back here from time to time and hitting the studio to make this record with the same rhythm section. I didn't want to separate myself from the scene, because it means a lot to me."