“I never feel isolated in the classroom. There’s a great, vibrant energy, and exchange of knowledge that keeps me buoyed up on bad writing days.” 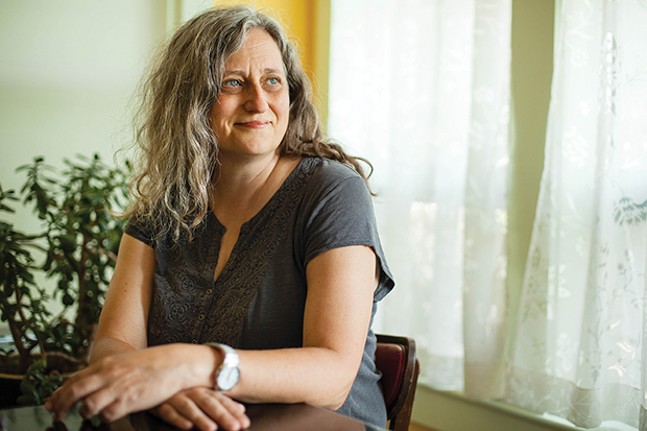 If Sherrie Flick isn't writing short stories, she's editing a manuscript or penning a food piece for publications such as The Wall Street Journal. This South Side resident's versatility allows her a rare work-a-day independence, but it also requires solitude.

That's why Flick relishes every class she teaches in the MFA and Food Studies programs at Chatham University.

“The work we do, we do alone,” says Flick of writers. “There’s no real way around that. But I never feel isolated in the classroom. There’s a great, vibrant energy, and exchange of knowledge that keeps me buoyed up on bad writing days, for sure.”

Some of the stories are less than a page long. “I like the idea of compression, being able to take a larger work and put it into the small form,” says Flick, who's been experimenting with flash fiction since 1987. “I also like the sense that there's almost a required interaction between the reading and the writing. As the reader reads the compressed scene, he or she is filling in more details than are on the page.”

Flick was born in Beaver County, but left when she was 18. She lived in New England, the Bay Area, Wyoming, and Nebraska before returning to Pittsburgh in 1998. Her works reflect her travels: There are no Western Pennsylvania landmarks in the stories, which are often set in anonymous, and sometimes Midwestern, locales.

“Some writers come here or grow up in this region, and the landscape and atmosphere of Western Pennsylvania, or Pittsburgh in particular, becomes imbued in their writing,” she says. “For me, and maybe it's because I grew up here, the landscape here is neutral to me as a far as being a writer. … This landscape has never sparked a creative interest for me. I write best when I'm in a kind of place I don't understand.”

Flick will appear September 7 with writers from Autumn House Press at Miller Gallery on the campus of Carnegie Mellon University.

For Flick, that means writing sojourns to the Florida Keys, New Mexico, or Cape Cod to work. But teaching at Chatham provides a ballast, a community, that she can't replicate anywhere. While the emotions of a story can flare briefly and sometimes linger, the byproducts of teaching are more tangible and lasting.

“These students become my friends and fellow writers,” Flick says. “And that big circle of mentorship and influence is important to me.”

Flick will appear September 7 with writers from Autumn House Press at Miller Gallery on the campus of Carnegie Mellon University.

The Bridge Series returns for a discussion on the region's air quality. “Breathing” will be explored by poet Barbara Edelman, a senior lecturer at the University of Pittsburgh; Nathaniel Broadus, youth projects coordinator at Partner4Work Pittsburgh and author of The Police State Saga; Grant MacIntyre of the University of Pittsburgh Law School, and former counsel for the U.S. Environmental Protection Agency; and City Paper’s Amanda Waltz. Proceeds benefit the Group Against Smog and Pollution.

Goldberg-DeLeo has a background in publishing, having worked for McGraw Hill. Bodnar has worked in financial and tech services.

The new owners plan to expand the shop's children's section and offer fresh coffee, but otherwise maintain the focus on mysteries established by founding owners Mary Alice Gorman and Richard Goldman in 1990.