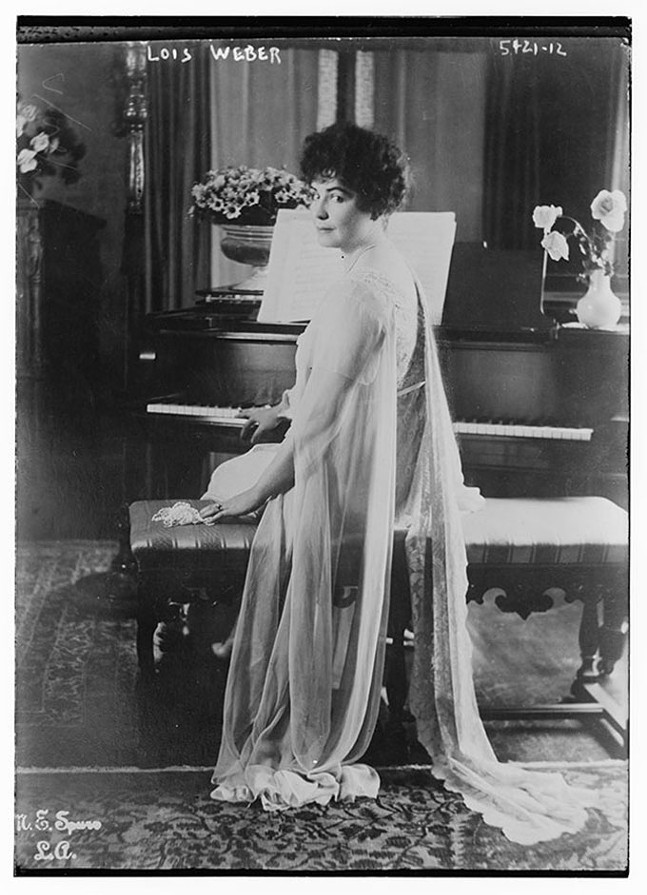 In honor of Women’s History Month, we thought it would be a good time to look back at some of the actresses and filmmakers that came out of Pittsburgh during the earliest days of the film industry.

It wasn’t until last year that director Lois Weber received official and permanent recognition in Pittsburgh, which is both surprisingly and unsurprisingly late, given that she was the first American woman to direct a feature-length film. Weber was a director, screenwriter, actor, producer, and pianist, who was involved in over 130 films, many of which are now lost.

In a 1914 interview, Weber was quoted as saying that in film, “I find at once an outlet for my emotions and my ideals. I can preach to my heart’s content, and … if my message fails to reach someone, I can blame only myself.”

She was known to take on social issues, including poverty and abortion. Hand That Rocks the Cradle, which was written and directed by Weber and her husband Phillips Smalley, stars the couple as family planning activists, inspired by Margaret Sanger. (Weber also made Where Are My Children?, a film that suggested abortion should be reserved for working class women. It was banned by Pennsylvania’s Board of Censorship.)

Weber, born in Allegheny City (the North Side) in 1879, grew up to become the first woman to run her own movie studio and production company, Lois Weber Productions. She was an important figure in the earliest days of the filmmaking industry, but she died poor. Only thanks to attentive historians has her life and work been resurrected.

Lillian Russell Moore is one of the few women interred at Allegheny Cemetery with a mausoleum that centers her name, as opposed to labeling her as “wife of” or “daughter of.”

Born Helen Louise Leonard, she spent the first part of her career touring with opera companies. She came to Pittsburgh when she married Alexander Pollock Moore, publisher of the Pittsburgh Leader.

Russell eventually starred in films, but her work extended beyond the stage and the screen, into the women’s suffrage movement and protesting income taxes in the name of voter disenfranchisement. In 1922, President Warren Harding sent Russell on a fact-finding mission in Europe. The findings led to the Immigration Act of 1924, which set a quota on the number of immigrants allowed into the U.S. from Eastern European and Asian countries.

Russell died in 1922 from injuries sustained on the trip, and as a result, received a military funeral. In her heyday, Russell was a renowned celebrity; her biographer Armond Fields cites her as a predecessor to Mae West and Marilyn Monroe.

Though she was born in Brooklyn and spent her childhood moving around, actress and singer Lena Horne spent a formative period of her life in Pittsburgh. When she was 18, Horne moved to Pittsburgh to live with her father in the Hill District, which was then a thriving area for Black jazz musicians and artists.

Her father Ted owned the Belmont Hotel, where Black artists stayed since they were banned from white-owned hotels Downtown. While living in Pittsburgh, Horne performed for Pittsburgh’s “white aristocracy,” as the Pittsburgh Post-Gazette described it in her 2010 obituary. During her time in Pittsburgh, she learned from legends like Billy Eckstine and Billy Strayhorn.

After five years, Horne left Pittsburgh and moved to Hollywood, starring in two dozen films, but became disillusioned with Hollywood, partly because of the racism and because she was blacklisted for supposed association with communist groups. She focused more on her singing, performing in nightclubs and on variety shows.

She also worked with Eleanor Roosevelt on anti-lynching legislation, refused to perform for a segregated audience, and attended the March on Washington.

While her time in Pittsburgh was just a piece of her expansive life and career, she left a long-lasting impression on the city. In 1990, she was the first inductee into the Pittsburgh Jazz Hall of Fame.