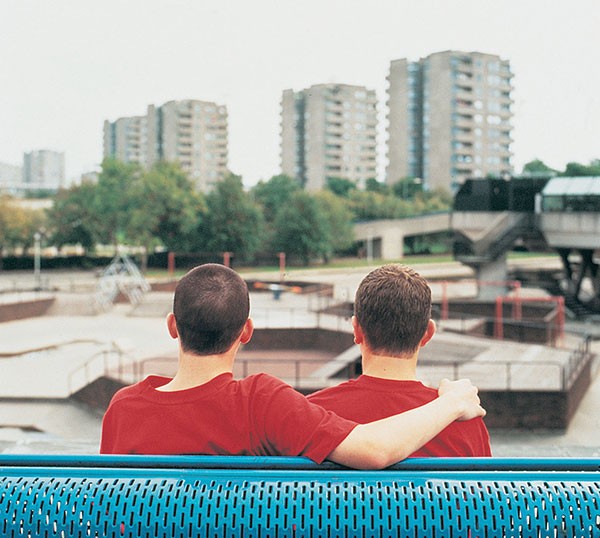 The young men of Beautiful Thing

The opening-night film is Strike a Pose (7 p.m. Thu., Oct. 6), Ester Gould and Reijer Zwaan’s documentary catching up with the six surviving dancers from Madonna’s 1990 Blonde Ambition tour.  (You might have also seen the men in the film Truth or Dare.) Twenty-five years later, the men recount the thrill of that experience, before sorting out how things went wrong after their brush with fame. Some battled drugs and depression, others diagnoses of HIV. Their moves are still great, the memories are still candid, and maybe pack a hanky or two.

Keep the tissues handy for Jonathan (5:30 p.m. Sat., Oct. 15), a German drama from Piotr Lewandowski about a young man who, while tending his dying father, discovers his dad is gay. This truth is at the root of some messy family history, and complicates further the already distant relationship between the two men. But decent folk have a tendency to rally, even in the face of — or perhaps because of — difficult emotional times. A film about sickness — and healing.

Healing is a steep mountain to climb in Deborah Esquenazi’s documentary Southwest of Salem (6 p.m. Sat., Oct. 8). It recounts how four Latina lesbians were convicted for a sexual assault on two young children whom they were baby-sitting. Much of the 1994 case turned on the women’s “deviant” sexuality, as well as the still-smoldering “satanic panic” of the late 1980s. First-person interviews with the women, their families and their legal advocates make this an intimate and compelling account of a miscarriage of justice.

In Burn, Burn, Burn (4 p.m. Sun., Oct. 9), from Chanya Button, two thirtysomething women take the ashes their deceased friend on a prescribed tour of Great Britain; their late pal narrates from pre-recorded videos. Turns out that this journey is less about him and more about his attempts, from beyond the grave, to prod the gals to get their acts together. A funny, sad-sweet look at modern friendship, with great performances from Chloe Pirrie and Laura Carmichael (a.k.a. Lady Edith from Downton Abbey).

All films screen at Harris Theater, Downtown. Single tickets are $9. Opening night is $15 and includes a party at Bricolage Productions. Closing night is $15 for film and dancing at the Pierce Studio (805 Liberty Ave.). Passes and student discounts are also available. See www.reelQ.org for complete schedule and more information.