Reed Putlitz, owner of the plant-based cafe Reed & Co., is not vegan, and he is not afraid or ashamed to admit it. He believes his preferences align with many Pittsburgh eaters who are looking for an easy way to eat healthy, without restrictions. This is the foundation of the Lawrenceville spot: fast-casual food, geared to make a healthy difference.

Reed & Co. opened in 2016, when Putlitz transformed a dusty, former H&R Block on Butler Street into a bright blue, welcoming cafe. It was, first and foremost, a juice bar. Grab-n-go food was an added, and delicious, bonus.

Putlitz says that in response to customer demands, the shop gradually shifted from a “juice bar that sells food” to a “restaurant that makes juice.” The menu now sports a bill of hot food dreamt up by chef Justin Crimone. There are hoagies, burgers, nachos, cold salads, and a rotating menu of specials and soups.

Juice, however, has remained a mainstay at the cafe. The first thing Putlitz said to me when I entered the Lawrenceville store was, “Can I give you a health shot?”

Reed & Co.’s health shot, like all of the store’s juices, is cold-pressed in the basement of their eatery. A massive, labor-intensive machine (the chute alone weighs 40 pounds) presses all of the elements – in this case, ginger, turmeric, lemon, cayenne – together at once. When poured, the shot is polished off with a drop of oregano oil. The combination is designed to fight inflammation and “put your gut at rest.”

Putlitz poured a full, two-ounce cup of the health shot, handed it to me, and gave a warning: “The burn will fade.” Though I’d much rather tolerate a burn from whiskey, the health shot was enjoyable enough and worth it, based on Putlitz’s promise of “it works.” 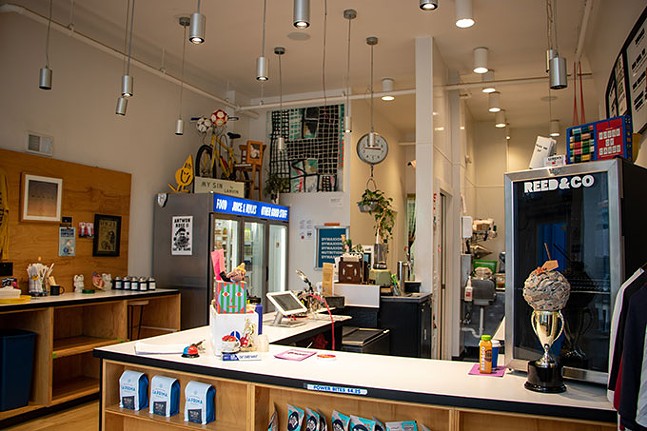 The cafe offers a myriad of other pressed juices and “mylks” (cashew-based drinks), ranging from the classic green to a sweet red beet. The super citrus juice, a blend of grapefruit, orange, turmeric, pineapple, lime, mint, and salt, was nice, light, and surprisingly, not too acidic.

A white drink, aka “mylk,” which Pultiz described to Pittsburgh City Paper in 2017 as a “healthy milkshake,” was exactly that. The blend tasted indulgent and unhealthy, despite the ingredients. Its nutrition comes from raw cashews and dates; mine was mixed with coffee for an added caffeine boost.

Putlitz came to the food industry from the fashion world and opened Reed & Co. with no prior culinary experience. He wasn’t new to retail, but food, he noted, was totally different than fashion. “You can talk somebody into a new handbag for the season,” he said. “But if they don’t like the food, then they’re not going to come back.”

And there’s no question about it. The food at Reed & Co. is good enough to keep Pittsburghers coming back.

The “Co.” in Reed & Co. also stands for collaborations. Right now, you can find the restaurant’s golden mylk in a cocktail at The Commoner.

This vegan alternative returns to Reed & Co. for Valentine’s Day.

Putlitz and his team supply shops and businesses, such as La Prima Espresso, with a selection of their grab n’ go goods.