CP Photo: Amanda Waltz
Mad Mex
Mediterra Cafe
430 Beaver St., Sewickley. mediterracafe.com
Last week, this popular cafe announced the bar at their Sewickley location is now open. Bring a date and check it out for yourself.

Adda Tea and Coffee House
926 Western Ave., North Side. addacoffeehouse.com
Announced via Instagram, Adda will now host High Tea at its North Side location. Details were scarce (the IG post simply reads "Coming back next month"), but the excitement is still there. Check their Instagram in the coming weeks for more details as they come.

Mad Mex
Multiple locations. madmex.com
The Gobblerito is back early at Mad Mex, so celebrate Thanksgiving early at any of the chain's locations. If you need something to wash it down with, Apple Cider Margaritas are also back as of April 19. CP photo: Jared Wickerham
Federal Galley
Federal Galley
200 Children’s Way, North Side. federalgalley.org
Patio season is almost upon us at Federal Galley. To christen the season, they also have a new BBQ menu at Provision, grilling up Fri., April 22.

Grist House
10 E. Sherman St., Millvale. gristhouse.com
Grist House will release a spooky new beer named after a famous cryptid. Craft beer fans will soon be able to sample El Chupa-lager-a, described as a light, crisp, and "highly drinkable" amber-style Mexican lager "with a German twist." Cans of the Mexican lager — on sale beginning Fri., April 22 — feature artwork of the legendary creature after which the beer is named. Grist will also release its Hazedelic IPA on Wed., April 20.

Balvenera
1600 Smallman St., Strip District. stripdistrictterminal.com
NEXTpittsburgh reported that the Strip will welcome Balvenera, an Argentinian restaurant originally out of New York City. The location will open this fall in 1600 Smallman, a newly renovated office and retail building across from The Terminal. 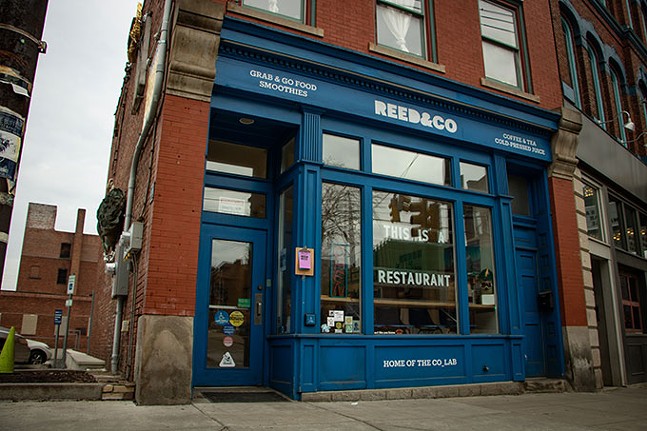 CP photo: Megan Gloeckler
Reed & Co.
Reed & Co.
4113 Butler St., Lawrenceville. reedandcopgh.com
This vegan spot in Lawrenceville announced that it will close its doors on Fri., April 22 AKA Earth Day. The closure comes after B52, another local vegan establishment, had its last day of service last week.

Harvie x East End Brewing
147 Julius St., Larimer. eastendbrewing.com
Harvie, a grocery service that sources from local producers, will host a May Market with East End Brewing Co. on May 29. The event will showcase the produce and other items Harvie has to offer.

Round Corner Cantina
3720 Butler St., Lawrenceville. roundcornercantina.com
Any vegans or vegan-curious patrons visiting this Tex-Mex spot should try the Root Veg tacos or the Corn and Black Bean Enchiladas, two new dishes made without meat or animal products.

Commonplace Coffee
Multiple locations. commonplacecoffee.com
Vegans and dairy-intolerant coffee drinkers, rejoice! On Thu., April 21 from 9 a.m.-12 p.m., Commonplace Coffee will host an Oatly Happy Hour at their University Square shop location in Indiana, PA, during which you can get any oat milk-based drink for free.
Have news about a Pittsburgh bar or restaurant? Send it to danijanae@pghcitypaper.com.