Should new construction in a historic district mimic original structures or distinguish itself by contrast?

Put a politician on a horse for a publicity event and the jokes seem to write themselves. Outgoing North Side City Councilor Darlene Harris was a good sport when she actually got in the saddle, with some apparent hesitation, on one of six horses present at a June 12 ribbon cutting. The project involves the renovation and addition to a historic building at 836 West North Avenue in the Allegheny West neighborhood.

The building is the old Allegheny City Stables, which, dating from 1895, is the last remaining municipal building of the former Allegheny City. The horses were thematic props for the event, and a bit of an amusing distraction from a project that combines a terrific success in preservation with a surprisingly generic component of new construction in a $7.5 million development of 36 residential units and related amenities.

The building was almost lost in 2007 when a developer threatened to demolish it, but the Allegheny West Civic Association nominated it to be a local historic landmark. The architectural style, most often described as Romanesque, really teeters toward the Renaissance, or more notably the personal invention in ornament of some capable bricklayers in the 1890s. Either way, it’s a beloved example of lost craft and an irreplaceable repository of neighborhood memory. The effort to find a sympathetic developer to oversee its reuse was especially challenging. 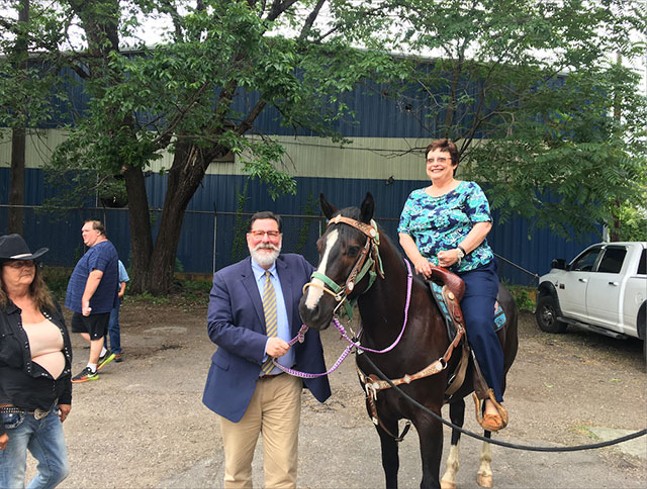 “It’s a positive development for our neighborhood that we are preserving our history while building brand new residences," says Allegheny West resident and former Historic Review Commission Chair John DeSantis.

And Go Realty has been notably conscientious in working with the neighborhood to get the renovation just right. Longtime resident Carole Malakoff is chair of Allegheny West’s Local Review Committee, which is responsible for giving feedback to renovators of historic properties to ensure that their work meets guidelines established by the city’s Historic Review Commission. “They have met with us every month I think for the past six months” to get the details right, she says.

The shortcoming has been with the proposed new construction. One Allegheny West resident, who asked not to be identified, commented, “It looks like all the other buildings they are building in the Strip or East Liberty.”

The developers and their architect, Jim McMullan of Jaimeson Ellis Architects, didn’t break any rules. In 2016, they presented to the Historic Review Commission for feedback, and they were responsive to various instructions, including an order to refrain from having new construction on the roof of the old building. Overall, they had a scheme for a much better design, one that aimed to match the materials and proportions of the historic building very closely.

Perhaps too closely? Historic Review Commission (HRC) members, documented in official transcripts, wanted the new building to look a bit less like the old to maintain a distinction between what is original and what is contemporary.

The question of whether new construction in a historic district should mimic original structures or distinguish itself by contrast is an ongoing debate in preservation. Current tastes and the current HRC lean toward differentiation rather than close matches. The developers and their architect took those instructions to heart a bit too much and redesigned the scheme as currently documented.

Archival photo of the Allegheny Stables property and DPW carriage

Also, while they continued to work with the Local Review Committee (LRC) to get the details of the Stables renovation just right, they never returned to the HRC. They didn’t have to. The building is a historic landmark, but the adjacent vacant property is not, so it is not subject to historic review.

But there will be no going back. The design released on June 12 is “shovel ready” according to developer Alan Reichert.

At the time of writing, the developer and architect were scheduled to have a further meeting with the LRC to refine the design of the Stables entry for greater historical accuracy — quite literally fixing the barn door. Harris has relinquished her mount as scheduled, but the thing that has gone missing is not a horse, but rather a better design for the building addition.