David Mamet sets his latest drama in the realm of sanctioned body blows.

Like all (or at least most) of the playwright David Mamet's films based on original screenplays, Redbelt is tight, intelligent, well-acted entertainment in a minor key. Its themes are familiar to us, if not entirely to him, and the best he does to freshen them up is make us wonder why he's doing it in the first place.

Mamet contrives his plot like it's one of his crime thrillers, and he takes a few especially bitter shots at Hollywood, which he did more playfully in his superb comedy State and Main. As for the martial-arts element of Redbelt -- well, it's a metaphor. Although Mamet has always been a pugilist, his weapon of choice is usually words, which rarely spill blood.

The hero of Redbelt is Mike Terry (Chiwetel Ejiofor), a former military man. (We sense, but are never told, that he was special ops, like in Mamet's TV series The Unit). Mike runs a struggling Brazilian-style jiu jitsu academy in Los Angeles. He's so committed to the philosophy -- "distraction is defeat," "there's always an escape," that sort of thing -- that he refuses to do anything so as to actually make money at it. (How Grasshopper can you get!) His Brazilian-born wife, Sondra, is a clothing designer looking for a break, and her shady brother owns a bar and promotes fights.

One night, a distraught attorney (Emily Mortimer) happens into the academy and fires a gun owned by a depressive police-officer pal of Mike's. Later, Mike saves an action-movie megastar (Tim Allen) from an antagonist and ends up with an offer to work for him. Lucky for Sondra, the actor's dilettante wife has a fledgling clothing business. Unlucky for the cop, the Rolex that the actor gave Mike was hot, and when the cop pawns it, he loses his job.

There are even more entanglements and schemes (Joe Mantegna and Ricky Jay help them along), and they force Mike to enter a splashy jiu jitsu competition. He fears for his integrity merely for competing, and it turns out to be worse than he imagined. Mamet could have reached his climax more simply, although I supposed he needed to put Mike into a very tight bind in a very corrupt world before he'd agree to compete. Still, much of Redbelt amounts to little more than an intriguing distraction.

I can't recall many men (and certainly no women) in Mamet's work who are as good and pure as Mike, and who have so little taint of original sin. Even Rocky Balboa settled for a moral victory, at least the first time around. ("The money is in the rematch," a corrupt promoter tells Mike.) Redbelt finally becomes very conventional and uplifting, and not nearly as rewarding as it should be. Perhaps that's because, in terms of human character, we expect so much less from Mamet, and always enjoy it so much when we get it. 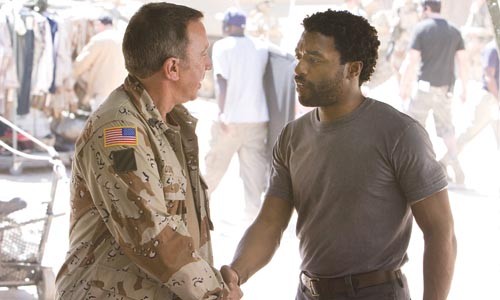 Men of the mat: Tim Allen and Chiwetel Ejiofor