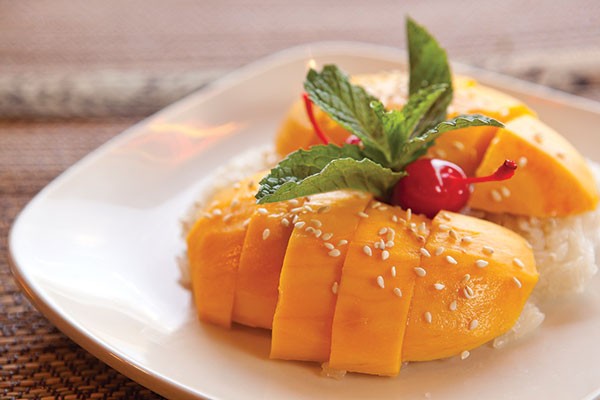 We can't deny rooting for the little guy. Patronizing small, local businesses is good for the local economy, of course, and it also feels like helping somebody's dream succeed. Red Orchid, a family-run Thai restaurant in a little strip mall in West View, is smaller than most: just a row of tables along one wall and a kitchen behind a partial wall on the opposite side. It seats so few, in fact, that we felt lucky to get a table when we arrived without reservations on a Saturday evening.

Yet it didn't feel cramped, and someone with a confident sense of style had done a nice job of blending standard Thai restaurant decor — wood carvings, colorful photos of villages and markets — with modern touches like pendant lamps that look like folded paper snowballs. On the tables, colorful, gilt-edged fabrics created sophisticated place settings. The open kitchen perfumed the air with curry and spice.

The menu offers a comprehensive selection of mostly tried-and-true Thai restaurant cuisine: salads, rice and noodle dishes, and curries. In addition, there is a page of chef's specials, many involving tilapia filets and a couple of items with "Thai teriyaki" sauce. There's nothing wrong with that, but we tried to stick with dishes that reflected the "authentic Thai" of Red Orchid's subtitle.

Tulip dumplings brought an unfamiliar (to us), charmingly poetic name to a familiar appetizer of seasoned, ground meat in wonton wrapper pouches, available fried or steamed. We ordered them fried, which was harsh treatment for such delicate little dumplings. But the rich shrimp-and-chicken filling held up just fine, and the ginger-and-black-soy dipping sauce complemented them well. We followed these with "Red Orchid Style Bread," the kitchen's take on Thai shrimp toast, in which marinated ground shrimp is mixed with onion, garlic and herbs, spread on little slices of bread and deep-fried in egg batter. The combination of sweet, savory and crispy was irresistible, and we especially liked the choice to serve it with a bright, sweet-sour dressing laced with diced cucumbers, whose freshness seemed to lighten the toasts.

The dressing on our avocado salad confounded us, however. Consisting of half of a perfectly ripe, creamy avocado sliced and served atop a bed of lettuce with some chopped hard-boiled egg for additional ballast, this fresh yet filling salad seemed to cry out for a light, bright, citrusy dressing. Instead, it came with a thick, peanut-based sauce similar to what accompanies satay. Though tasty on its own, it was too thick to toss with the greens, resulting in several bites of plain lettuce.

Our final starter, nam took, was essentially a steak salad that could have easily doubled as an entrée, with marinated slices of beef grilled medium-rare and served over greens with a scoop of sticky rice. This dish presents two challenges: developing sufficient sear on steak thin enough to cook instantly, and balancing the elements of a dressing that is spicy, cool and just a bit earthy from the ground rice. Red Orchid nailed both counts: The meat was perfectly tender, with flavor boosted by a well-rounded dressing loaded with finely crushed chilies.

Green curry was another well-balanced concoction, this time of piquant green chilies, sweet coconut milk, aromatic herbs and spices, vegetables and moist chicken whose mild flavor was a perfect foil for the bolder ones it accompanied. Shrimp pad Thai, however, was too sweet for our taste, and could have used more fresh lime and crushed peanuts. Shrimp were few but full of succulent flavor, so that they served as more than just a garnish.

Finally, pad ka prao was a deceptively simple dish of ground pork and sweet red and green peppers in a spicy basil sauce, served atop rice and garnished with a fried egg. Yet each element added distinct flavor and texture, so that the dish added up to more than the sum of its parts. The peppers, in particular, pervaded the dish, providing crunch in each bite and alternating sweet and slightly bitter notes. Additionally, the yolk of the egg contributed a creamy element to the sauce while extending the dimension of umami flavor.

Red Orchid may be small, but it represents a significant addition to the community of Thai restaurants in and around Pittsburgh.