Rectifying the erasure of pioneering historian Arturo Schomburg, one poem and song at a time | Features | Pittsburgh | Pittsburgh City Paper 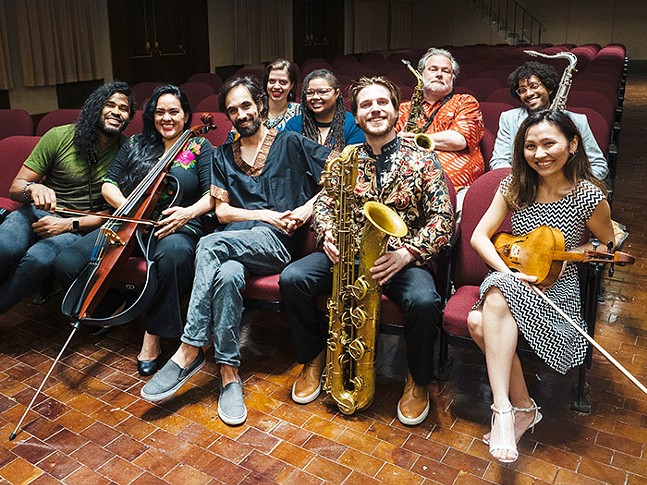 Photo: Jared Murphy
Afro Yaqui Music Collective
“How familiar are you with the work of Arturo Schomburg?” Magdalena Gómez asked me during our interview.

I admitted I was not familiar with his work and Gómez, writer of the musical play, Erased: a Poetic Imagining on the Life of Arturo Alfonso Schomburg, said, "That is not your fault.” Schomburg has been more or less erased from history, and through a collaboration with the Afro Yaqui Music Collective, Gómez is working to spread knowledge about the unknown prominent figure of the Harlem Renaissance.

When looking at the educational system in the United States and taking notice of what is taught and what’s passed by, there is a large amount of eraser in who's heralded and who's not.

“If you look at the walls of schools in February,” says Gómez. “There’s Rosa Parks and Dr. Martin Luther King. Yes, I love them, but they were not the civil rights movement. They were not its origin. It goes as far back as 1880, the 1890s, the beginning of colonization.”

Schomburg, who was born in Puerto Rico to a German father and African mother, was told as a child that those of African descent had no history or achievements. Feeling something was amiss, he spent the rest of his life unearthing African history. After moving to New York City in 1891 and becoming an activist with the Revolutionary Committee of Puerto Rico, playing an important role in the fight for Puerto Rico and Cuba's independence from Spain, he found a passion for discovering artifacts that proved the history and achievements of people with African descent. Schomburg gathered over 30,000 artifacts ⁠— books, papers, slave narratives, and more ⁠— on Black history.

“The irony is that this man who basically rescued Black history for the entire world, his influence is part of all of our lives wherever you are, no one knows who he is,” says Gómez. “I’ve been in Harlem and asked young children if they know who he is, and they say no, but yet the Schomburg Center for Research in Black Culture is housed on 135th Street in Harlem.”

There are also only three scholarly books written about Schomburg. Gómez wasn’t aware of him until 1993 when while working at an Upward Bound program in Mass., the teacher asked if Gómez would like to join the class trip to the Schomburg Center.

Photo: Mark Weixel
Hope Anthony, an actor and singer in Erased, performing at the Kelly Strayhorn Theater
“I said, ‘What’s that?' He had been erased from my life. From that moment, I had this thought that I would someday write about him.”

Gómez started the process in 1999 but had trouble finding someone to collaborate on the project with her. People were disinterested because Schomburg was far from a household name. She picked up the project again in 2017, and knowing that she wanted it to have music, could think of no one else than Ben Barson of Afro Yaqui Music Collective. The two met in 2010 when Afro Yaqui was performing in Massachusetts, Gomez’s home base, where she was recently named the poet laureate of Springfield.

“When I heard Ben play, and saw his leadership with the band, it was extraordinary,” says Gómez. “I knew that this was a very talented human being with a great moral and social compass. I could tell right away that we were on a similar path on how we saw the arts. … In order to get to the soul of a man like Schomburg, I have to work with people who are desirous of it.”

“Also because of erasure, people don’t always associate Puerto Rico with Blackness, with having African ancestry," says Barson. "So we wanted to capture all that amazing history in music. … Some of it's avant-garde, it's dissonant, it's uplifting, there are gospel vocals. It’s all kind of built into the multifaceted experiences of not only Schomburg’s life but the time period in general.”

This was important to Afro Yaqui because Peurto Rico continues to suffer immensely under U.S. occupation, as the response to Hurricane Maria demonstrated.

Now, Erased: a Poetic Imagining on the Life of Arturo Alfonso Schomburg is ready to spread Schomburg’s name and important contribution to Black history. On Thu., Oct. 24, three sections of the play will be performed at City of Asylum. Erased has previously been performed at the Bing Arts Center in Springfield, the National Jazz Museum in Harlem, and Kelly Strayhorn Theater Alloy Studios. Barson says the City of Asylum show will be the most developed iteration of the piece to-date.

The hope for Gómez and Barson is to secure funding, so they can take Erased on the road. If you would like to get involved in any capacity, feel free to reach out to either Gómez or Barson. This includes acting in the project.

“We like to mix it up with actors and non-actors, people that feel the work," says Gómez.