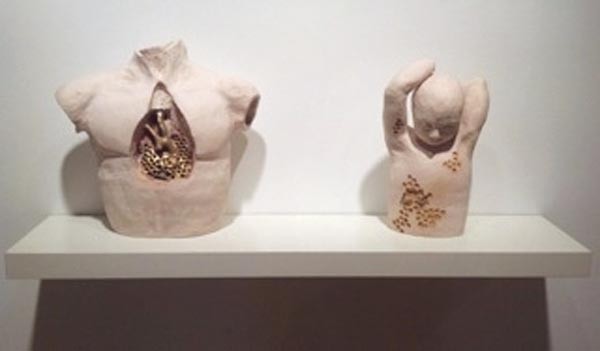 Recreation/Renewal/Rebirth is the strong and diverse Pittsburgh Society of Sculptors group show now at Pittsburgh Center for the Arts.

On entering, the first work you'll likely notice is Eli Blasko's pile of bricks balanced precariously upon two wooden benches stacked end to end, 12 feet tall and titled "Architecture of the Grandiose Idea." Witty stuff, but perhaps even more striking is Hannah Grace Downey's paired earthenware torso and bust "Honey and Blood." The torso's chest cavity has been deeply excavated, revealing an artery and a honeycomb, the latter echoing a shallower pattern on the bust. And in the adjoining gallery is Trevor King's sardonic "Heritage." With its sections of trunk and branch, mismatched but cobbled and shimmed into a full-scale tree, then whitewashed, it's a concise comment on the crafting of our pasts.

Elsewhere in this exhibit juried by Lori Nix, James Nestor's terse "Corona" features a floodlight on a motorized arm that intermittently elevates then falls, casting a glow like a sun trying and failing to rise. Nearby sits Edmund Tillotson's "Consett," stacked platforms bearing 3-D shapes, some suggesting houses, and cartographic-style markings; it's cryptic, but intriguing. Similarly architectural is Justus Cotterill's elegant "Ideas of a Few Carried Out by Many." This large-scale, floor-level piece consists of a river of paper boats bearing a cantilevered board covered with small, building-like objects and geometric diagrams; that both the "ideas" and "the many" seem similarly fragile might be the point of this explicitly allegorical work.

Also notable: the rugged simplicity of Tom Como's "Pharoah's Ride," an empty, coffinlike vessel submerged in a slash of red; Ronald Nigro's "Out of Black," a standing sculpture crafted from old computer innards that's among Nigro's sleekest (and largest) works in this vein; and Marla Roddy's "Magnification (Diatom)," a hollow steel sculpture, named for an algae but at scale suggesting a shellfish, or a medieval knight's helmet.

Recreation/Renewal/Rebirth is one of five shows now at PCA. Of the rest, the most engaging is Pittsburgh Print Group's 2012: The End of Time. This group show keying off that misread "Mayan prophecy" features solid work, from tongue-in-cheek to serious, by artists including Chris Calligan, John Hanna and Sharon Wilcox, who contributes a gorgeous abstract monoprint. And Terri Perpich and Ken Beer's "Behold a Pale Horse," ethereally creepy, suggests we're due for some end times after all.