Sometimes you're in the mood to try something new. Sometimes you're not. With a name evoking favorite meals passed down through generations, as well as dishes memorable enough to make a regular out of you, Recipes Remembered is a restaurant that manages to serve both impulses.

Tucked between Mount Nebo Road and I-279 North, Recipes Remembered occupies an outwardly nondescript little building at an unlikely location. Though small, the building somehow manages to be rambling, resembling a ranch house more than a traditional restaurant. Within, an intimate bar and a pair of dining rooms are decorated in a homey suburban style. There are wallpaper borders printed with raffia-wrapped bottles of chianti, and displays of faux flowers. The dining room was full of regulars, and we were instantly treated as such ourselves.

Deciding to explore the recipes we ourselves did not remember, we started with a potato-pancake Reuben, which was listed as a sandwich but made a great appetizer. Thin-sliced corned beef and sauerkraut was piled on a still-crisp potato pancake with Swiss cheese broiled atop. The potato stood up to the strong flavors better than mere rye bread -- Angelique, not a sauerkraut fan, was glad the kraut wasn't too strong -- and the proportions of the ingredients were good. The whole thing just worked. On mini-pancakes, it would be a great canapé. Alongside were impressive French fries, with crisply textured surfaces.

A seemingly more refined starter, artichoke hearts Romano, was rather more pedestrian. The breading was so light as to be insubstantial, and the lemon-cream puddle was too mild to add much to hearts that seemed strongly flavored even as they were a bit washed out.

Thanks to the simple-starch-lovin' palates of our children, we tried a number of pastas: shrimp Alfredo, cheese tortellini and white scoglio, the last being a variation on white clam sauce made with a variety of seafood. The thin-sliced scallops were sweet, the minced clams were briny, and the shrimp were plump and meaty. However, the garlic white-wine sauce was almost creamy in texture, as if butter had been substituted for olive oil. The flavor was excellent, if the effect was too heavy.

The same sauce reappeared in the tortellini, but here it was lightened and brightened considerably by the presence of wilted spinach and grape tomatoes that had been gently cooked, just enough to take the firmness from the flesh without sacrificing any of its freshness. It was a simple, but successful, dish, as was the shrimp Alfredo. Nothing revelatory here -- just plump, pink Gulf shrimp in a luxuriously creamy sauce over fettuccini, a classic combination.

Angelique was tempted by a new-to-her dish of chicken breasts stuffed with cream cheese, shrimp and minced banana peppers, coated in panko and fried. The chicken was moist, and the panko made for an appealingly delicate crust. But the cream cheese, melted in the oven, poured out when the chicken was sliced, so that it had to be mopped up from the plate, and the effects of the shrimp and peppers were so subtle as to be nearly undetectable. Angelique would have liked a more assertive flavor from this imaginative filling, whose components have the potential to really jazz up an ordinary chicken breast.

Veal Zurich -- a breaded and fried veal cutlet, topped with onion rings, Swiss cheese, bordelaise and lemon-buerre blanc sauces -- was another unfamiliar dish that, like the potato-pancake Reuben, just worked. Perhaps it was the sinful combination of deep-fried, melted and buttery ingredients.

All our entrees came with salads distinguished by the house tomato-garlic dressing, sort of a marinara-lite for fresh veggies, sweetly astringent with just enough fresh garlic bite.

Recipes Remembered is a cozy little restaurant where even the dishes you've never tried have the easy-to-eat, easy-to-like qualities of good, old-fashioned comfort food. But with everything from the décor to the ingredients understated in the extreme, it's hard to say if this was a meal we'll long remember. 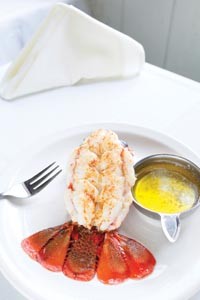