"LGBT health has been woefully neglected as a topic for serious research." 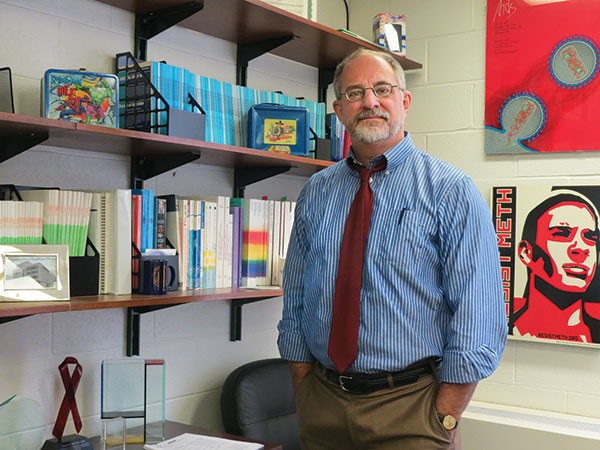 In the world of LGBT health, Dr. Ron Stall has identified what he calls "the knee and the navel problem."

For years, studies and subsequent funding for studies revolved around HIV transmission and sexually-transmitted diseases.

"Everything in LGBT health, the whole scientific agenda, is to study the area between the knee and the navel," says Stall, director of the Center for LGBT Health Research at the University of Pittsburgh's Graduate School of Public Health. "There are multiple health conditions that affect LGBT populations. We sort of know the prevalence rates — how common they are —  but that's about it. And we certainly don't know how to stop them."

Therein lays the focus of Pitt's Center for LGBT Health Research. Among the work of researchers involved with the center include studying the higher rates of substance use, depression, experience of stigma and discrimination among the bisexual and transgender, to studying young men who have sex with men and how some overcome adversity and achieve positive health outcomes.

The Center started about a year ago and is a rebirth of sorts of Pitt's Center for Research on Health and Sexual Orientation, which started in the 1990s.

"Our goals ... come from the realization that LGBT health has been woefully neglected as a topic for serious research," says Dr. Anthony Silvestre, associate director of the center. "It's been underfunded and pretty much neglected by the [National Institutes of Health] for decades."

The LGBT population faces its own set of health challenges, Stall notes, including greater risk for breast cancer, HIV and stress-related conditions. Youth are at risk for suicide from bullying, and there are higher rates of substance-abuse disorders.

"What we're finding is the experience of very early marginalization ... that sets people up, even in adolescence, for a disadvantage," says Stall. "They're more likely to have a series of psycho-social problems that set them up for medical conditions."

But research helps develop interventions to prevent those issues. And so far, those involved with the center have published several peer-reviewed publications. The center also offers an academic certificate for LGBT health — something not widely available. The American Foundation for AIDS Research also funded a training program at the center to host international scholars from South Africa, China, Lebanon and Vietnam to learn how to write grant proposals for LGBT health studies in their own countries.

Furthermore, researchers are not isolated from the community; the center is a collaboration between faculty, staff and students with an interest in LGBT health.

"It can be a great place for people who are doing community work that want to develop relationships with academics," says Dr. M. Reuel Friedman, a member of the center and Pitt's HIV Prevention and Care Project. "I want to encourage folks within the community to come and make contact with us. Too often in academia we wind up closing ourselves in, and I don't think that's what anyone at the center wants to have. ... It should be a place that's really inclusive."

Indeed, researchers and public funding have faced their share of challenges. In 2003, for example, then-U.S. Rep. Patrick Toomey argued that National Institutes of Health (NIH) grants for research into sexual behavior "were much less worthy of taxpayer funding," than research on "devastating diseases," as reported in a 2008 study from the University of Michigan. Toomey tried to amend the 2004 appropriations bill, which the House narrowly defeated.  The researchers note there's been challenges with the NIH. Dr. Randall Sell, an associate professor and director of the Program for LGBT Health at Drexel University, recalls attending meetings at the agency where researchers were instructed not to use the word "transgender."

But there's been some progress, catching up to the work that's been done at Pitt. In March 2011, for example, the Institute of Medicine issued a report called "The Health of Lesbian, Gay, Bisexual, and Transgender People: Building a Foundation for Better Understanding." The NIH created an LGBT research committee to suggest ways to support research and "increase the knowledge base for promoting the health of the LGBT community," according to a Jan. 4 statement from NIH Director Francis S. Collins. And on June 27, the NIH held a listening session — attended by Collins — on LGBT health.

"To me, it's a sea change when the director of the NIH knows all of the [research-related] words, knew what they meant and was identifying concerns," says Sell. "It felt like a switch [turning] that we've been trying to turn forever."