The Civic Arena has hosted countless acts over the years: Johnny Cash, The Rolling Stones, Ringling Brothers ... even the Promise Keepers. But Carol Burnett has a unique distinction: Not only was the comedienne among the first performers to take the stage -- she was the first to complain about it.

On July 4, 1962, the Pittsburgh Press reported, Burnett unveiled the arena's new retractable dome to a capacity crowd. "Ladies and gentlemen," she declared, "allow me to present ... THE SKY."

But soon she was complaining, half seriously, about the chilly air. "It'll be a pretty nice place when they get the roof fixed," she gibed.

The audience laughed, content with what reporter Ralph Brem called "their gleaming inside-outside entertainment oyster on the half-shell." But as Burnett's joke suggested, the arena, which may now have gone dark forever, has entertained us for half a century almost despite itself.

Architect Rob Pfaffmann has some good memories of the arena, of course. For one thing, the Boston native says, it's been a great place to watch hockey.

But that's not why Pfaffmann wants to hold onto the building, even as the Penguins move to the Consol Energy Center across the way.

Pfaffmann lauds the arena as an example of "googie architecture": a Space Age design, in this case by Pittsburgh-based architect Dahlen Ritchey, that George Jetson would have felt comfortable in. Unlike a lot of slab-sided modernist monstrosities, "It has rounded shoulders," says Pfaffmann, a founder of the arena-preservation group Reuse the Igloo. "It's not a big box, so you can view the city around it. And the engineering was ahead of its time."

Indeed, the arena was an effort to prove Pittsburgh's technological prowess, as well as its Renaissance efforts to rid the sky of smoke. As a 1961 press release crowed:

"The huge steel umbrella, whose pie-wedge steel sections can be opened to the city's clear skies, or closed at the touch of a button, will become one of the great public meeting places of the world." Meanwhile, the retractable panels -- six of the roof's eight leaves -- "move at [up to] 4 feet per second, faster than the average passenger elevator. ... Complete opening or closing takes 2 ½ minutes."

The roof was originally proposed by a city councilor, Abe Wolk, to allow arts groups to perform outdoors without fear of rain-outs. But others seized on it as a metaphor for a city on the move. "The auditorium will stand as a symbol of an era here," then-Mayor David L. Lawrence pledged. 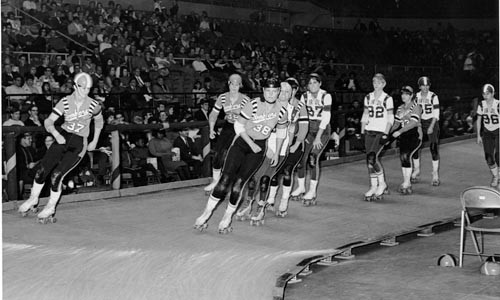 It didn't quite work out that way. Originally, the arena was to house the Civic Light Opera, and become the linchpin of a new cultural district. Nearby land was "reserved for future cultural developments, such as a theatre, symphony hall and art gallery," promotional materials pledged. But in September 1963, famed conductor Leonard Bernstein -- in town with the New York Philharmonic -- blasted the arena's acoustics. "The music is wasted," he told the Pittsburgh Press. "[T]his is my first and last concert in the arena." Others complained as well. By the end of the 1960s, the CLO had abandoned its home, and the culture district was fated to move Downtown.

But less-highbrow entertainment, like rock shows and tractor pulls, didn't require acoustic perfection. Conceived as the city's drawing room -- a place to sit when company came over -- it became our basement instead. It was the game room, the place to play music loud, and avoid parental supervision.

In 1976, for example, the Pittsburgh Post-Gazette reported that prior to a Doobie Brothers show, a "young, long-haired man" announced from the stage: that "[c]oncealed in the audience are several undercover narcs. [So] if you've got any drugs, throw 'em on the stage and the work crew will take care of them for you."

Such tolerance waned, of course, but employees faced other, more onerous, tasks. Since the dome lacked conventional rigging, PA systems and lighting required complicated "bridling" of cables hanging from the roof. And crews often had only hours to switch from one function to the next.

Still, there were reasons guys like Jay Szewczyk stayed there for decades. During the mid-1980s, Szewczyk started working as a high school busboy in the Igloo Club, later moving up to working the luxury boxes. He met his share of celebs -- Michael Keaton, Jim Belushi, Mario Lemieux himself -- and in the early days, after the hockey game ended, "We'd go on the ice and horse around with sticks and pucks. The greats had just played, and the lights were off. Today that's unheard of, but nobody yelled at us."

Outside, though, the yelling never really stopped. 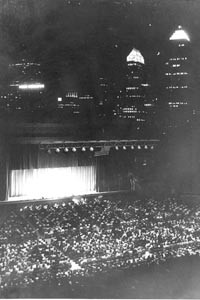 Library and Archives, Sen. John Heinz History Center
The Civic Light Opera performing -- with the city skyline as a backdrop.

"The arena has always been a symbol of the harm done to the Hill District community," says Sala Udin, who formerly represented the Hill on city council. "It's not nostalgic for me."

City elders meant well when they relocated 8,500 Pittsburghers to make way for the arena. As David Lawrence biographer Michael Weber notes, three-quarters of the housing was substandard, and tuberculosis rates were triple the city average. But moving people out was the easy part. There was a shortage of replacement housing even as community institutions were being torn up by the roots.

"The arena amputated half the Hill, and the remaining half is still sick," says Udin. While he says the arena could be part of a redevelopment plan, "I don't think the project could be as rich with the arena present as with it gone."

The Sports & Exhibition Authority, which owns the structure, seems to agree. The agency signed a 2007 agreement with the Penguins promising to raze the arena, and earlier this month released a draft report supporting demolition. Razing the arena, the report argues, will remove a "redundant spectator facility that would be in competition with the Consol Energy Center" while allowing for a return to street patterns "reminiscent of [those] that predated the Arena."

It's not even clear whether the movable roof still works. Pfaffmann, of Reuse the Igloo, says workers have told him the motors still function. But the roof hasn't been opened since 2005, because rigging attached to it has to be removed first. Officials at arena management firm SMG say they aren't sure they could reopen it -- or get it closed.

Still, the structure might also be eligible for designation as a historic landmark, and to satisfy federal requirements, the SEA has convened a panel of "interested parties" to decide the arena's future. Representatives include the Penguins, city officials, nearby community organizations and historic-preservation groups. For now, officials say that it's premature to talk about farewell ceremonies. "There's no schedule set on any of that at the moment," says SEA head Mary Conturo. "We're still working through the historic-preservation review process."

State Sen. Jim Ferlo (D-Lawrenceville) has his doubts. An ardent preservationist, Ferlo says the agency is merely "fronting for groups like the Penguins, who want the arena gone." He wants to consider alternate uses for the arena; for example, he's heard suggestions that it be turned into a hockey hall of fame. (Doesn't Toronto already have one? "Who cares?" Ferlo asks. "It's a matter of marketing.")

Ultimately, the arena's fate may be decided in a courtroom: Pfaffman says Reuse the Igloo "isn't actively threatening a lawsuit, but we have hired a lawyer." While Ferlo agrees that the arena has "both a good and bad history," he worries razing it could be as ham-fisted as building it had been.

One proposal, in fact, involves leveling everything except the massive trusswork -- built by Pittsburgh-based American Bridge -- that once supported the arena's dome. There it could stand like a post-industrial sundial ... clocking the lifespan of each generation's attempt to remake the city's landscape.