Ranking the best Pittsburgh Pirates shortstops is a depressing chore

Clint Barmes didn’t make the top 10, but a bunch a guys a lot less famous than him did. 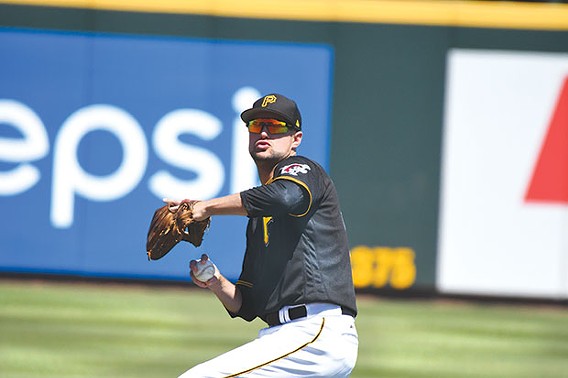 In 1936, former Pirates shortstop Honus Wagner was inducted into the first class of the Baseball Hall of Fame. The “Flying Dutchman” is the best shortstop in Pittsburgh Pirates history, and likely one of the best overall players.

So, as we continue our series on the best Pirates player at every position for the past half-century, we’ll take a look at the best shortstops. In full disclosure, this isn’t a very good list, and I’m pretty sad about that. Wagner was one of the best players in baseball history, and the personnel who have filled his spot over the years are pretty bleak.

The fact that Abraham Nuñez, Pat Meares and Mike Benjamin almost made it shows how lacking in depth the position was. Troubled third baseman Jung Ho Kang didn’t play enough games to qualify at short (two seasons), but he would have placed well. In case you’re wondering, “Harmless” Clint Barmes didn’t make the top 10, but a bunch a guys a lot less famous than him did.

10. Rafael Belliard, the eternal backup, stayed in the league just long enough to make this list. Belliard provided neither power (one home run), nor average in his tenure with the Pirates. He did get a World Series ring later with Atlanta. It’s the only championship any pro team in that city has ever won.

9. Freddie Patek must have had one of the smallest strike zones in baseball history. At 5’5”, he was the shortest Major League Baseball player of his time. The 148-pounder played back when shortstops wore glasses and choked up on the bat. Thanks to the steroid monsters of the modern era, the likes of Freddie Patek will never be seen again. But give the little guy credit, he had a very respectable pro career.

8. Ronny Cedeño, and no, this is not a joke. Cedeño had the fifth-highest batting average and On Base+Slugging percentage (OPS) of all his peers. A significant downgrade from the Jack Wilson years, Cedeño played OK during the Pirates nadir of 2009-2010. In fact, he is still getting paid to play professional baseball in Italy. The UGF Fortitudo Bologna employs him now. Or as we call the team here in Pittsburgh, UGF Fortitudo Jumbo.

7. Dale Berra looked like a 1970s drug dealer who just walked out of a phone booth after calling his guy about some ’Ludes. To be fair, Berra was more into drugs in the 1980s, as a featured member of the “Pittsburgh Cocaine Trials.” He also has the odd distinction of having the longest major-league career as the son of a Hall of Famer. Hall of Fame players simply don’t breed Hall of Fame kids, and Yogi’s kid was no exception. Berra strung together enough passable years to earn the No. 7 spot.

6. Tim Foli really only had one good season with the Pirates, but he picked a good year to do it. In 1979, Foli came over from the Mets to hit .291 in the regular season and .333 in the World Series. Foli averaged one home run in his four years with the team. But what he lacked in power, he lacked even more in speed, averaging just six stolen bases in his tenure. His overall batting average kind of sucked too, but he was on in October.

5. Frank Taveras had even less power than Tim Foli. In his career, Taveras only hit two home runs, and only one of those went over a fence. The other happened because, man, could he run. In 1977, Taveras led the league with 70 steals. Taveras was traded from the 1979 team to the lowly Mets early in the season.

4. Jordy Mercer is the player who Pirates fans wish was just a little bit better. But statistically speaking, only three Bucco shortstops have had better careers in the last 50 years. Mercer has the second-best OPS and the fourth-best WAR (wins against replacement) on the list. Nobody ever buys a Mercer jersey, but nobody yells that he should be traded, either. Someday he’ll sit down to write his memoir — Just Good Enough: The Jordy Mercer Story.

3. Gene Alley was half of one of the greatest double-play combinations in history. He and Bill Mazeroski once recorded 161 double plays in a season; that’s still a record. Alley shows up third in almost every single category. That’s why he’s third on the list. A steady defensive player, he won back-to-back Gold Gloves. Alley was just overshadowed in a lineup featuring Maz, Clemente and Stargell.

2. Jack Wilson had the highest batting average and best fielding percentage of all the guys on this list. He was a 12-year big-leaguer who never got to play in the postseason. He was solid, underappreciated, never complained and held down shortstop for PNC Park’s first nine seasons. Wilson’s nearly decade-long consistency was a stable anchor in an era of tumultuously bad baseball. But Jack was ranked second for the “Flying Dutchman” Award for best Pirates shortstop.

1. In the 10 statistical categories measured for this list, Jay Bell was No. 1 in six. Bell had it all: power, speed and a Gold Glove. And getting that Gold Glove required Bell to outplay an icon. Bell broke Ozzie Smith’s 13-year stranglehold on the Gold Glove for National League shortstops. He even did something most on this list didn’t do — hit in the postseason. In the 1991 NLCS, Bell hit .414. Wilson and Alley both had very good careers, but Jay Bell bested them both. Honestly, it wasn’t really even close.