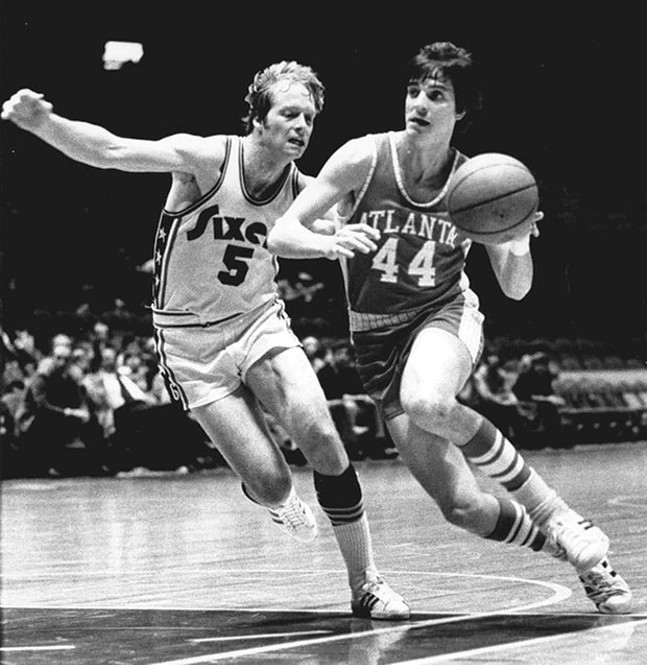 Pro basketball is the only team sport where citizens of Western Pennsylvania cannot root for the team that plays closest to the house they live in. Technically, we would be Cleveland Cavalier fans, or maybe root for the Philadelphia 76ers or the Washington Wizards. But most sports fans in the area find it genetically impossible to don a jersey with the words “Cleveland,” “Philly” or “D.C.” That would be like asking for Hunt’s ketchup on your burger or arguing that Captain Kangaroo had the best children’s television show. No matter how hilarious Mr. Green Jeans was, we can’t do it.

But this disconnect from the current pro game doesn’t mean Western Pa. isn’t a major player in pro-basketball’s legacy. Chuck Cooper, a Duquesne Duke, was the first African American drafted into the NBA. We also gave college basketball its all-time greatest player in Pistol Pete Maravich. So, is the Pistol the best in the pros, too? Here’s a list of the nine best pro ballers from the 412.

The consummate NBA journeyman, Fortson toiled on the hardwood for a decade, playing mostly for Denver, Golden State and the Seattle SuperSonics. The big man played his last two high school seasons at Shaler, and college ball at Cincinnati.

Imagine what he could’ve done if he had just one good knee. The Schenley High grad dominated at Pitt during Jamie Dixon’s heyday. Blair went to Mark Cuban’s Dallas Mavericks after a couple of productive seasons with the San Antonio Spurs. Unfortunately, he wound up sitting on the Wizards bench for his final season, but still had a respectable run, averaging 6.8 points per game in 424 NBA games.

The Uniontown product played in the NBA during the 1970s and averaged more than 12 points a game over his career. In an era of extreme shorty shorts, Stu wore them with style. Also, we’re taking credit for Stu even though he’s from the 724, not the 412.

He is the second biggest celebrity to come out of Bethel Park, behind Rick Sebak. The Hammer put up good numbers everywhere he went, including stops in New Jersey, Philadelphia and Milwaukee. Gilliam averaged just under 14 points a game in the big time.

The Rankin native and Westinghouse product had the highest player-efficiency rating out of anyone on this list. He played only three years in the pros, though, before a terrible on-court head injury left him paralyzed and ended his career. Stokes threw down more than 16 points a game and averaged more than five assists a game in his brief but spectacular career. Stokes died in 1970 at age 36, 12 years after the accident. His teammate Jack Twyman cared for him from the time of his accident until his death.

Lucas, who grew up in the Hill, had his number retired by the Portland Trail Blazers and was a five-time All Star. Lucas shot 47 percent from the field and played in more than 1,000 NBA games.

People are always talking about Twyman. At least, they should be. Besides his selfless devotion to Stokes, Twyman averaged 19.2 points a game in his career. Sure, it was with the now-defunct Cincinnati Royals, but it still counts. He is also responsible for creating 75 wins for his teams in his career, in which stat Twyman ranks higher than anyone else on this list. He is in the Naismith Basketball Hall of Fame.

Pistol Pete Maravich is in both the college and pro basketball halls of fame. They didn’t have the three-pointer in college when he went to Louisiana State University or he would’ve added to his NCAA scoring records, including a career average of 44.2 points per game; in the pros, Maravich averaged 24.2 ppg. He wasn’t as dominant in the NBA as he was in college, but that would have been impossible. The Pistol played in Utah and Atlanta in the pros and is maybe the best athlete to come out of Aliquippa, which is almost a higher honor than the Hall of Fame