Healthful and quick, Japanese soups are a welcome addition to Pittsburgh's food scene 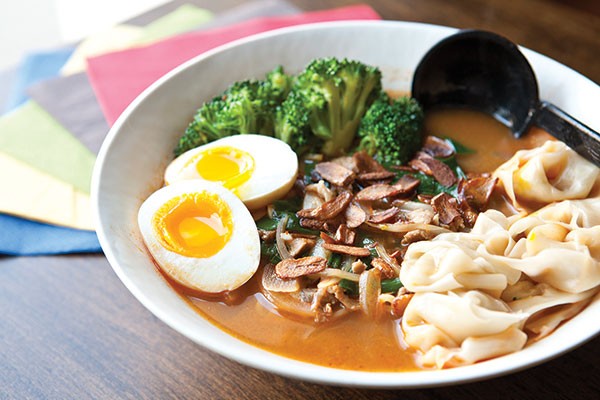 Angelique moved to Pittsburgh with a brief restaurant wish list. The boxes for Ethiopian and tapas were firmly checked, eventually. Her next wish, Japanese noodles, took rather longer to reach fulfillment. Happily, Ramen Bar has now arrived in Squirrel Hill, bringing with it traditional ramen options, along with an intriguing penchant for applying the ramen technique to a variety of classic dishes from across Asia.

For those who associate the appellation "ramen" solely with those college-student-sustaining cellophane packets, we feel obliged to clarify why a ramen restaurant should be reason to celebrate. Real, homemade ramen soups bear as much resemblance to the shelf-stable version as backyard-grilled burgers do to fast-food pucks. Wheat noodles are long, slightly chewy and submerged in one of several homemade broths with myriad other ingredients reminiscent of ice-cream-parlor add-ins. Part of the pleasure of dining at a ramen restaurant is in customizing your bowl to your tastes.

Although ramen-noodle soups are traditional Japanese fare, the décor at Ramen Bar has taken the Japanese minimalist aesthetic in a modern direction: The primary feature is a wall-sized photo mural of a Tokyo street scene, all neon and glass and people, people everywhere. It evokes the experience of ramen as urban convenience food — fast and efficient to prepare and consume, but healthful and satisfying enough to call dinner.

While our soups were prepared, we sampled the gyoza, dumplings beautifully made in house. The filling was chicken-based and mild, which would have been fine if the dipping sauce had had more character. But instead of the citrus zing of ponzu and the spice of hot sesame oil, it tasted mostly of soy sauce.

Our enormous bowls of soup more than made up for this small seasoning deficit. They were served with appropriately large spoons and, of course, chopsticks (forks are available as well). One challenge with bringing ramen to America is the clash of etiquette. The Japanese technique for eating noodle soups involves slurping and scooping the noodles into your mouth in a manner considered most un-mannerly on these shores. There's no ideal solution, but we'd suggest that you let your hunger — and desire not to drip broth on your shirt — be your guide.

And the flavors are eminently slurpable. One bowl of traditional ramen with shoyu — chicken and aged soy sauce — broth was flavorful, with plenty of umami punch, and, in this wintry spring, deeply satisfying. The default protein was pork: two thick slices of roast shoulder that were tender, rich and easily pulled apart with chopsticks.

Next came a pair of soups from the "Specialties" section of the menu, both inspired by Chinese cuisine. Tan tan men was the ramen version of a ground-pork dish traditionally served over noodles in a sesame-based sauce, and Ramen Bar's translation to soup was fluent. The broth was heady with sesame, permeated with spice, and what appeared to be hand-minced pork resisted the toughness that well-done ground meat can take on. The crowning touch, about which our server rightly raved, was slivered, fried garlic. Slow-cooked to balance its pungency with sweetness, it was a perfect garnish to the chili-punctuated earthiness of the bowl.

Mabo-ramen was another highly successful adaptation, this time of a Chinese dish that is already popular in non-soup form in Japan. Consisting of ground pork (again) and tofu in a spicy bean sauce, this translated into a deep red broth fully suffused with both savory and spicy notes. From the add-ins list, Angelique selected spinach, and found the just-wilted leaves to be the perfect vegetal complement.

The tightly focused menu does admit a few non-ramen items, including curry rice. The mild flavor reminded us of Mussaman curry, which itself is Thailand's version of an Indian curry. It was tasty, but rice-heavy; we wished we'd added in more vegetables to go with all the starch. Interestingly, it was served with a bowl of shoyu broth, which our server said was sometimes dumped in the rice to make it soupy, and other times drunk solo like a consommé.

We would welcome a proliferation of ramen joints, but Ramen Bar does such a good job that it can shoulder the burden of standing alone.