CP Photo: Ryan Deto
Rajbhog Indian Market & Cafe in Cranberry
In Pittsburgh, the most ubiquitous Indian food is curry, and the most ubiquitous curry is probably chicken tikka masala, the tomato-based chicken dish that’s popular with just about everyone.

But Pittsburgh is home to a significant South Asian community, and there are many other delicious Indian foods to try. That includes Indian street foods, which people can eat on the go.

Most Indian street foods fall under the chaat category of South Asian cuisine. Chaat is a family of savory snack foods that originated in India and has since expanded to Pakistan, Nepal, and Bangladesh. Most chaat are made to be eaten with one's hands, as the word derives from the Hindi words for delicacy and licking one's fingers while eating.

Luckily for Pittsburghers, especially those in the North Hills, Cranberry has a very fine establishment that excels in chaat and other Indian street foods: Rajbhog Indian Market & Cafe.

Rajbhog, which opened in 2018, is located in a strip mall that shares space with JOANN Fabrics and Cranberry Cinemas. The location is filled with a sleek, well-lit market containing specialty spices, fresh vegetables, Indian yogurt, paneer cheese, rice, and Indian snack foods like masala-spiced potato chips. The market alone warrants a visit, but Rajbhog also has a charming cafe offering a large menu with a wide array of curries and tandoor chicken combos.

But the street food is the star of Rajbhog’s menu. The cafe has a large variety of chaat dishes — like bhel puri (puffed rice with onions, potatoes, coriander, and chutney) and dahi bhalla (lentil dumplings dipped in whipped yogurt) — as well as samosas, dabeli (spicy potatoes inside a buttery bread roll), and something Rajbhog calls a “Bombay Sandwich.” 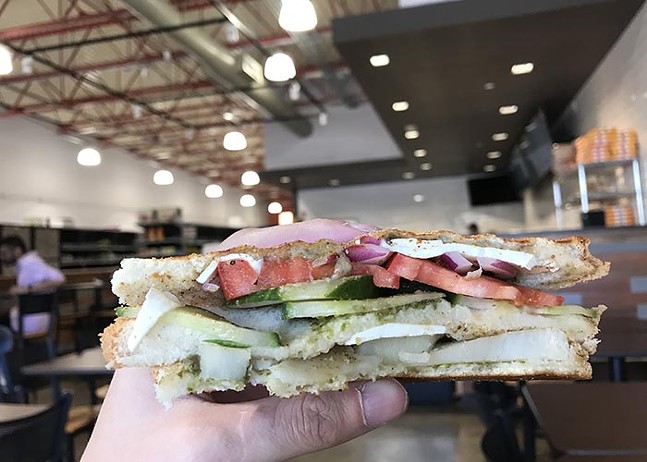 CP Photo: Ryan Deto
The Bombay Sandwich at Rajbhog Indian Market & Cafe
I tried the Bombay Sandwich and it was satisfying in a way I didn’t expect. It's basically a panini made with white bread and loaded with a perfect combination of Indian (and vegetarian) ingredients. A soft layer of spiced potatoes rests on the bottom and is topped with red onion, cucumber, tomato, and chutney. A middle layer of bread soaks up any extra moisture from the potatoes or chutney, keeping the outside of the sandwich crispy. A thin layer of paneer cheese melts just a bit and adds a nice richness, creating a filling, yet fresh sandwich that’s perfect for lunch on the go.

I also sampled the chicken and lamb samosas. They were delightfully crispy and packed with flavorful meat. I would suggest being liberal with the coriander and tamarind chutneys that come with the samosas, as they provide some much needed moisture.

Rajbhog also offers kathi rolls, also called kati rolls, a Bengali dish that usually involves a skewer-roasted kebab wrapped in a paratha flatbread. There are 10 different kathi roll options, ranging from lamb, chicken, paneer, and even an egg version. Most are filled with yogurt, garlic, onions, and spices to provide a rainbow of flavors.

If none of those options persuade you, Rajbhog has excellent Indian pizzas, combining one of America’s favorite foods with Indian ingredients like chicken tikka masala, paneer tikka masala, and pav bhaji, a mashed and spiced vegetable curry served as a thick gravy. Rajbhog even has the Indian version of Coca-Cola called Thumbs Up — similar to the American version, but a bit less sweet — to wash everything down.

In the end, everything at Rajbhog is tailor-made for a lunch crowd looking to skip the fast food drive-thrus and explore the fast foods of South Asia.Rajbhog Indian Market & Cafe. 20111 Route 19, Suite 302C, Cranberry. rajbhogpittsburgh.com