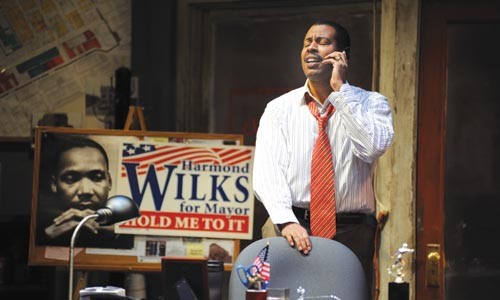 With Radio Golf, one of the most remarkable feats of American Theater draws to a close. August Wilson set out to write 10 plays, one for each decade of the 20th century. Radio Golf is the 1990s play and the last written by the Pittsburgh-born playwright. The sad truth is that Wilson wrote the play while he was dying and finished it shortly before his death from liver cancer, in 2005.

The play opened and closed rather quickly last year on Broadway, and now receives its local premiere at the Pittsburgh Public Theater.

Just to keep it all in perspective, there is not a single playwright, living or dead, who has ever written 10 knockout plays. (Even my personal favorite, Tennessee Williams, is extremely uneven.) So there's no slight intended to Wilson to say that Radio Golf is one of his lesser works.

Harmond Wilks, played with rock-ribbed integrity by Morocco Omari, is running to be the first black mayor of Pittsburgh and could quite possibly win, thanks to his solid business background. Along with his partner, Roosevelt Hicks (E. Milton Wheeler in a very energized performance), Harmond plans on opening a shopping/residential development in the Hill District. Everything seems to be moving smoothly for him.

But there's a problem. One of the homes scheduled for demolition is that of Aunt Esther, a recurring Wilson character. Esther came to America with the first shipment of slaves in 1619 ... and didn't die until Wilson's 1980s play, King Hedley II. We have only ever seen her in Gem of the Ocean, but she's talked about in most of the other plays. She is Wilson's symbol of the African legacy, the history African Americans have in this country, and the long shadow thrown by the past.

You know there's gonna be trouble when they want to tear down her house.

Uncharacteristically for a Wilson play, there's a lot of plot in Radio Golf, and it's all accompanied by matching exposition ... a lot of it. But even with all that story-framing dialogue -- and with Tyla Ambercrumbie, Montae Russell and Alfred H. Wilson providing incisive talent in supporting roles -- I still had trouble with the ending. I don't want to spoil it, so let's just say I was left completely unaware of whatever point Wilson was aiming toward.

Yet while this last installment in the series may not be earth-shattering, there's no getting around the fact that the series as a whole most assuredly is.