“If you let it go, that means it is OK. Things can escalate.” 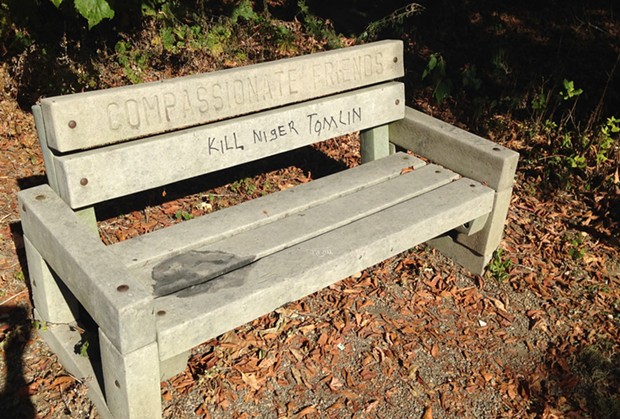 CP photo by Ryan Deto
A park bench on the North Side Three Rivers Heritage Trail has been vandalized with the words "Kill Niger Tomlin."
On Sept. 24, the Pittsburgh Steelers couldn’t make up their minds on how to respond to President Donald Trump’s comments that National Football League players who kneel during the national anthem in protest of police brutality are “sons of bitches” and should be fired. The entire Steelers team, with exception of one player, remained off the field during the anthem.

Some fans burned their Steelers jerseys and called for a boycott of the Steelers, since they felt the action was disrespectful to the country. (Ironically, as WTAE's Andrew Stockey pointed out on Twitter, the Steelers game a week after the anthem fiasco actually had higher TV ratings than the Sept. 24 contest.)

And while the actions of some Steelers fans were melodramatic and mostly harmless, one action uncovered by City Paper has touched a deeper, uglier nerve. On a park bench on the Three Rivers Heritage Trail along the Allegheny River, the words “Kill Niger Tomlin” are written in black marker. The vandalism spells the racial slur incorrectly and appears to be a threat directed at Steelers head coach Mike Tomlin, who is African American.

This vandalism was first discovered on Sept. 30 by a North Side resident who was walking by the bench located near the I-579 overpass north of PNC Park. The resident, who asked to remain anonymous since she is African American and fears reprisal, told CP  that she was taken aback by the vandalism. “The n-word, it’s not appropriate,” she says.

She then called the Pittsburgh Police to request that the vandalism be removed because the racist threat is in a prominent location where hundreds of bikers and pedestrians can see it. She also wanted it removed because many football fans on their way to Heinz Field use the trail, and she doesn’t want the vandalism to normalize racist views toward Tomlin or other African Americans.

But when an officer with the city police graffiti unit met the woman at the bench, her concerns were downplayed. She said the officer told her the vandalism was “just words” and that “you hear this a lot lately” from black youth.

“Do you see how it is different? This is threatening to kill someone,” she told CP she remembers telling the officer, who was white.

She said the officer told her the vandalism would be removed, but the next day, she said it was still there. CP checked the park bench on Oct. 3 and the words were still there.

“If you let it go, that means it is OK. Things can escalate,” says the North Side resident. “I thought the next day it would be gone, but it is still there. It didn’t seem like it was a priority.”

Pittsburgh Police spokesperson Sonya Toler wrote in an email to CP that she has viewed the police report and the officer who spoke to the North Side resident "appears to have acted appropriately with collecting the information from the reporting person."

"If the person feels the officer downplayed her concerns, that is not the fact and we apologize," wrote Toler. She added that there is an ongoing investigation associated with this vandalism report.

The North Side resident also told CP that she then reached out to Pittsburgh Mayor Bill Peduto’s office via Facebook, but was told by a community-affairs office employee to reach out to the graffiti unit, which she had already done. She also received what appears to be an automatic email response, which she shared with CP on Oct. 2, when she sent her concerns to the graffiti unit via email. The repose said her email would be forwarded to Peduto's community-affairs office. She said she feels the whole situation is being underplayed.

“If you are the task force for this, I don’t see how someone scribbling the n-word isn't important,” she said. “You are pretty much telling me that it is not important. But things like this actually hurt people, kneeling doesn't hurt anyone, but this is offensive. It ‘s disheartening. Racism is poisonous to everyone.”

Peduto spokesperson Tim McNulty wrote in an email to CP that the city’s community-affairs office hasn’t had a chance to respond to the North Side resident’s email as of early this afternoon, but confirmed that the community-affairs office did respond to her request on Facebook on Oct. 2. And McNulty wrote that the Public Works department has been notified and will remove the graffiti “as soon as possible.”

In response to the nature of the vandalism, McNulty wrote: “It's obviously vile and stupid, and we encourage trail users who may have witnessed the vandalism to provide police with any information that may help identify the vandal.”

The North Side resident works in Downtown, but is originally from the Cleveland area. She said the vandalism is an example of the wrong message being sent out in a city that hopes to grow in population and in inclusivity.

“I was thinking about Google, and how many engineers are people of color,” she said. “If you want to attract that type of demographic, your city will look different. If that is important you, then you can’t have the n-word scribbled on a park bench.”

This report was initially sourced through CP's collaboration with ProPublica's Documenting Hate project.