Flenner is the founder of Rabbit Foot Creamery (the name is a tribute to a childhood nickname given to him by his grandmother), the city's newest plant-based cheese company, launched in late August at Farmer x Baker in Aspinwall. All of his cheeses — the flagship flavors including gouda, cheddar, fiesta jack, mozzarella, goat cheese, and almond feta — are non-GMO, organic, vegan, dairy-free, soy-free, and gluten-free.

Each cheese begins with a cultured coconut milk instead of what Flenner says is the more popular choice, coconut oil. He finds oil-based cheeses don’t “hold up like a real cheese”; the texture, he says, turns greasy and melts like “oily water.” 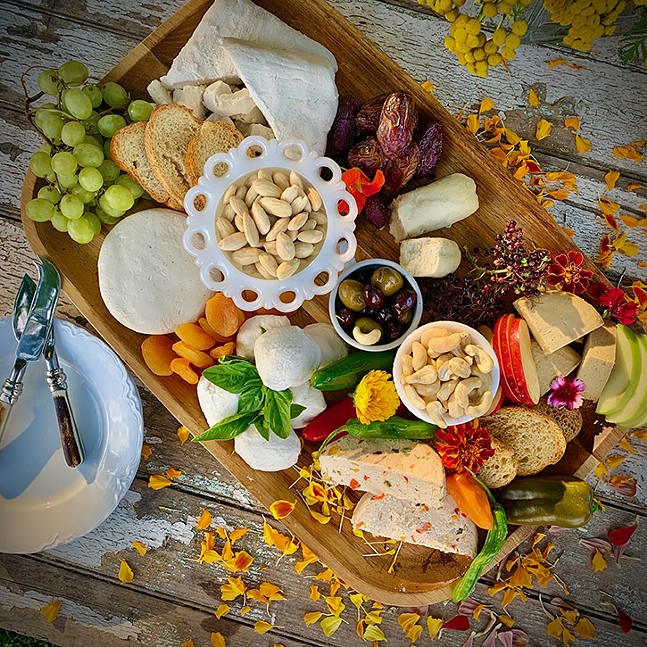 Photo: Courtesy of Christopher Flenner
Rabbit Foot Creamery cheeseboard
After the coconut milk, he adds flavors, which come from added ingredients, not the milk. (There’s only a small amount of the cultured, acidic base in each cheese.) Flenner tries to keep on the lower side of additives, bringing flavor with the culturing agent, salt, nuts, and chickpea miso. His mozzarella is flavored with onion powder, and peppers are worked into the pepper-jack style fiesta jack cheese.

Aging comes next, which also adds to flavor. Like their dairy counterparts, Flenner’s cheeses are aged in a temperature-controlled environment. But rather than build a cheese cave, Flenner opted for a wine fridge.

“Vegan cheese can age like dairy cheese a little bit, but since it's plant-based and not relying on cow’s milk, it has a different makeup that makes it a little trickier to do,” he explains. “I have my wine fridge in conjunction with a hygrometer that measures temperature and humidity. Too much or too little can make the cheese go south.”

In addition to his six flagship cheeses, Flenner is slowly producing a rich, aged bleu cheese and a camembert using a vegan mold. These cheeses take about eight weeks to grow mold and age, but once done, will sport the classic blue-green funk and veins on the inside.

Rabbit Foot Creamery cheeses are available for purchase through email (limited delivery and pick-up) and will soon be available through Flenner’s website, rabbitfootcreamery.bigcartel.com. They’re also available on the menu at Farmer x Baker from time-to-time. Updates on cheese availability and the progress of Flenner’s bleu cheese can be found on Instagram.com/rabbit_foot_creamery_.