A friendly, comfortable casual restaurant in the heart of East McKeesport 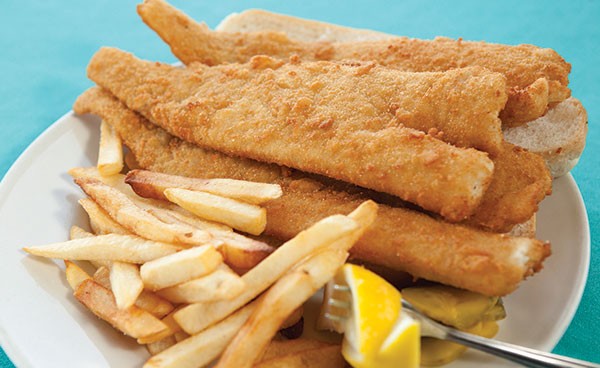 Some say the phrase "you can't get there from here" was invented in Pittsburgh. Whether or not that's true, our region's road system will make your GPS beg for mercy, and complaining about it is a venerable pastime among natives and newcomers alike.

Sure, getting lost is no fun, but there can be serendipity while traveling our region's countless meandering highways and byways. It was just such lucky happenstance that led us to a family-owned Italian and seafood restaurant in East McKeesport with the improbable name of R-Time at Rene's. The restaurant we had set out for, within a rollercoaster's drop of Kennywood, turned out to be closed. Still hungry, we charted a course for Monroeville, which led us through Duquesne and McKeesport to East McKeesport. There we discovered a little commercial district complete with an old-fashioned hardware store, a barber with customers still hanging out at dusk and R-Time at Rene's. Well, we thought, why not?

Rene's current identity dates back to 1987, but the layout, with a bar entrance off the sidewalk and dining room entrance off a small parking lot, suggests a longer history — perhaps of the kind of place that millworkers might have patronized for a drink at the bar after work, and returned to for family meals on weekends.

The place was pretty quiet at 8 p.m. on a Thursday, although a steady trickle of customers came in for the kitchen's weekly all-you-can-eat shrimp special. We passed on that, but sampled seafood in the forms of crabcakes, lobster mac-and-cheese and Rene's "famous" fried fish sandwich. Cannelloni and pasta covered the Italian side of things.

The presence of lobster mac-and-cheese hinted at some contemporary updating of Rene's mostly old-school menu, and our crabcake order confirmed this hunch by coming with chipotle-lime cream and piquillo pepper purée.  These sauces, accompanying a starter portion of three wee crabcakes, were among the highlights of the meal. Each one had its own dynamic flavor — the chipotle-lime tart and zingy, the pepper sweet and earthy — which, in turn, played off the other's zestier quality. The crab itself was too salty, although we liked the cakes' proportions: tall enough that each side took some sear even as the interior remained moist and just cooked through.

Another starter, fried zucchini, also featured a properly cooked interior, allowing the thin planks to retain their bright, vegetal appeal. Parmesan-peppercorn was a good choice of dipping sauce. But the bread-crumby coating was distractingly tough.

Jason had no complaints about the wedding soup, with its broth bursting with chicken flavor and its tiny, tender meatballs; his only quibble was that it could have stood some more greens. The lobster in the mac-and-cheese, however, had almost no presence. We detected no lumps or claws in our sizable serving, just shreds, and these had an off-putting fishy flavor that the gooey cheese mix was too mild to counter.

Rene's "award-winning" cod sandwich was better than that, and its breading was, happily, lighter than that on the zucchini. But it was not as light and crisp as we've had on the best fish sandwiches around here. Pittsburghers know their fish sandwiches, and would probably classify this one as "good enough."

What separates cannelloni from other stuffed pastas, like shells or manicotti, is the thinness of its wrapper: Whether relying on crepe-like crespelles or paper-thin sheets of pasta, cannelloni has a delicacy that other, more robust stuffed noodles do not. That's why it didn't work that Rene's used lasagna noodles — the old-fashioned, thick ones with ruffled edges. The result was a dish that, though different in form from lasagna, was indistinguishable in taste and texture. Judged as lasagna rolls, it was satisfactory, and well complemented by a flavorful meatball. But Jason's hopes for good, tender cannelloni had been dashed.

Angelique was well satisfied with her pasta dish, though. She designed it herself off the "Create Your Own Pasta!" menu, and it consisted of penne in a credible vodka sauce with good, spicy Italian sausage and just-wilted spinach. Other options, including linguini or whole wheat linguini, "signature" tomato sauce, garlic and oil, and alfredo a la Rene's, looked equally palatable.

R-Time at Rene's is off the beaten path — ours, anyway — but provided a comfortable, friendly and ultimately satisfying meal on a night when the journey turned out to be the destination.