Question of Style: District 6 council race becoming as much about how, and not what, things are done | News | Pittsburgh | Pittsburgh City Paper

Question of Style: District 6 council race becoming as much about how, and not what, things are done 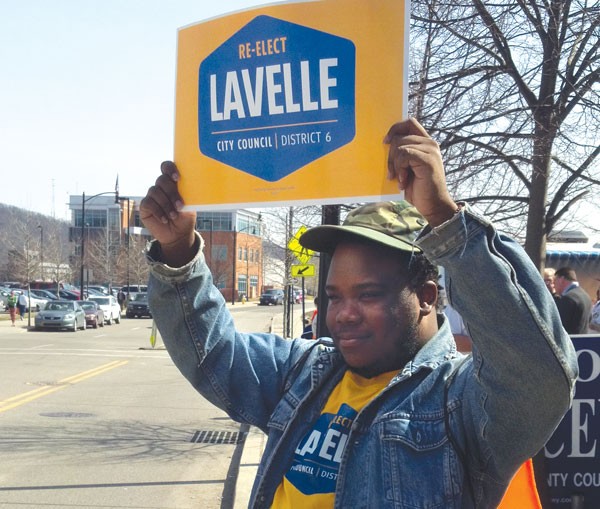 Payne followed that 2009 loss with another — a 2010 campaign for state legislature. For the past year, the 48-year-old Uptown resident has held a job at the Pittsburgh Water and Sewer Authority. But "I can't really effect change or make things happen if I'm sitting on the bench," says Payne. "And that's what I feel like I'm doing right now."

The endorsement contest was close: Payne beat Lavelle by just eight votes, 45-37. And while Payne has long been popular with party foot-soldiers who vote in the endorsement, Lavelle's total was a marked improvement over the 12 votes he received in 2009. That "shows the significant level of support Lavelle has built among the committee members," says Khari Mosley, Lavelle's campaign manager.

Sunday's tight battle may be a sign of things to come, as the two again face one another in the upcoming primary election. There is also a third challenger for the seat, Franco "Dok" Harris, a 33-year-old with the name recognition and resources that come with being the son of former Pittsburgh Steelers running back Franco Harris.

Like Payne and Hill resident Lavelle, Harris has strong ties to District 6, which encompasses parts of the North Side, Downtown, Uptown, the Hill and Oakland. Harris grew up on the North Side, though he's a Downtown resident now, and is courting the Downtown constituency in particular and counting on his fresh outlook to help drive his candidacy.

"It's a fairly ugly race" between Lavelle and Payne, he says.

Top on the list of priorities cited by all candidates for District 6 is economic development and balancing it with the needs of low-income residents, particularly on the Hill and in Manchester. Development of the former site of the Civic Arena will also be a pressing issue: Within the next four-year council term, the Pittsburgh Penguins will face deadlines for developing the site under an agreement with the city and the neighborhood.

"We're facing a time when we have to be able to negotiate and interact with private interests, government interests and neighborhood interests in a way that is productive," says Marimba Milliones, executive director of the Hill District Community Development Corp.

The Hill isn't alone in that respect. Downtown is also facing growing pains, says Jeremy Waldrup, president and CEO of the Pittsburgh Downtown Partnership. Over the past eight years, the number of people living Downtown has increased 30 percent, he says.

"Out of that stems one of Downtown's biggest challenges," he says. "How do you integrate residential life in a high-density [commercial business district]?"

As the campaign moves forward, Lavelle's challengers are focusing on differences in style, targeting Lavelle's quieter approach to politicking.

"Daniel is quiet on the city council," Harris says. "We need a tenacious fighter. Quiet does not get things done."

Lavelle says the district's improvement speaks for itself. Lavelle is board vice-chair of the Urban Redevelopment Authority, and he cites his role in helping to revive the Hill's stalled Shop 'n' Save grocery store project. Started under Payne's tenure on city council, construction halted last fall when the project ran out of funding amid concerns about mismanagement. Under new leadership at the Hill House Association, construction is underway again.

Other committee members, however, say they like Payne's warmer, more familiar style.

"She genuinely cares about all the people who live in the district," says Marlene Russell, who chairs the 5th Ward committee.

But while Payne has the party behind her, Lavelle received the endorsement of the Allegheny County Labor Council last week. He also should enjoy the benefits of incumbency, which often include fundraising prowess. County records do not show a recent campaign-finance filing by Lavelle, and a city financial-disclosure form filed in January indicated less than $10,000 in campaign funds, but his campaign says he has raised roughly $75,000.

Payne and Harris have yet to start raising money, they say.

"It's very hard to go against the incumbent," Payne says. But with the committee endorsement in her pocket, "It's a winnable campaign, most definitely."