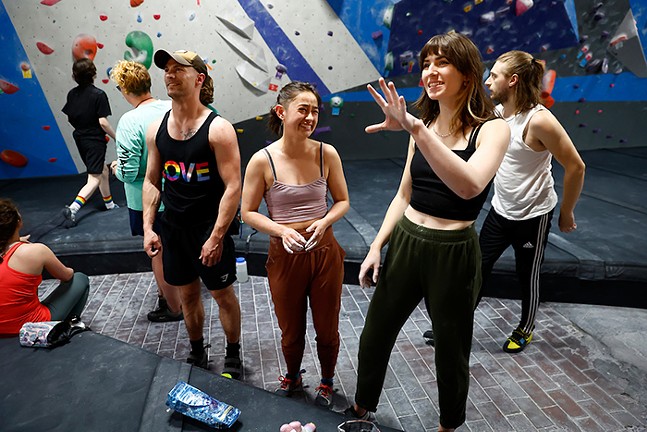 CP Photo: Jared Wickerham
Queer Scouts climbing group
When Mische Holland first moved to Pittsburgh in summer 2020 amid the COVID-19 pandemic, they were not sure how to connect with other queer people in the area. The San Diego native has had a passion for rock climbing and outdoor sports for over three years now, and began climbing at the ASCEND rock climbing gym in the South Side as businesses slowly began to reopen after lockdown.

By Holland’s second year in Pittsburgh, they wanted to get more involved in community outreach in their sport and the LGBTQ+ community, and those two passions combined as they took on a role as a team captain for the Queer Scouts climbing club.

“The turnout is mostly people who are new to climbing, it’s a very social thing for a lot of us,” they say. “Gyms, in nature, can feel a little scary if you associate ‘gym’ with fitness and weight lifting, but I feel like climbing is more fun and more approachable. It’s very amenable to different body types.”

Holland, a PhD student at the University of Pittsburgh School of Medicine, used to be involved in a queer skeleton club while in undergrad, so that experience encouraged them to joining another queer athletic club. They co-captain the Queer Scouts with Cat Schrading.

“When the club was founded by a cool group of people a few years ago, some of them worked at ASCEND. They were not only climbing, but also did a lot of work to push for a lot of the inclusive things that ASCEND does now — like the Affinity Sessions, other clubs that they have founded now,” Schrading says.

Affinity Sessions are free climbing sessions that take place on the third Saturday of every month at the Pittsburgh location, and are open to anyone who identifies as a woman, queer, nonbinary, trans, or femme as an open, judgment-free climbing time. The gym also hosts Affinity Sessions for members of the BIPOC community once a month.

“I would say that 50% of people, maybe even more, that come to these club meet-ups have either never climbed before or don’t have ASCEND memberships, but they want to come for the community,” Schrading says.

Schrading adds there is an extra aspect of safety and comfort that the Queer Scouts offer to members of the LGBTQ+ community when they come to climb.

“There is this consideration for the queer community of ‘Will I see people like me there? Will there be a bathroom I can use? Where will I change?’” she says. “There’s all of these different considerations that can keep people from trying new things and I think it's really great that the club is here to support that.”

Annie Hanichak, a club regular and routesetter at ASCEND Pittsburgh, loves seeing the opportunities Queer Scouts gives to get members of her community who otherwise might not consider climbing at the gym.

“It’s great for them to come and join a group, where it’s comfortable and it’s a fun open group to learn about climbing or climb together and not feel pressure that you would when climbing by yourself or with a few other friends in a typically white male-dominated sport,” Hanichak says.

Since Hanichak works at the gym, in addition to being a club member, she gets the chance to help new members learn the ropes of climbing, even on the bouldering walls that don’t require ropes. She says she primarily works with men at ASCEND, and thinks setting aside gym time for those who identify as LGBTQ+ or BIPOC will help diversify the climbing world.

For Holland, the introduction and connection to the LGBTQ+ community in Pittsburgh is what they are most grateful for when it comes to their involvement with Queer Scouts. Since taking on a leadership role in the club, they have felt more enabled to branch out into the local queer community, and found friends with which to explore other outdoor activities such as camping and hiking.

“Because I moved here at the peak of the pandemic, I didn’t know anyone before coming here. I’m starting to find out more about the queer community in Pittsburgh, but my basline was zero,” Holland says. “And a lot of avenues I would have gone down to do that didn’t exist at the time, and this is just a fun way to connect.”

Described by Hanichak as the “granola gays” and “hippies,” the Queer Scouts celebrate love of the outdoors and athletics, as well as the importance of finding your community.

“The climbing community itself is very open and liberally-minded, and open to the queer community,” she says. “That’s the way I’ve found it here in Pittsburgh for sure.” Queer Scouts Climbing. linktr.ee/queerscoutsclimb, instagram.com/queerscoutsclimb, and ascendclimbing.com/community