“The party can get pretty gay.” 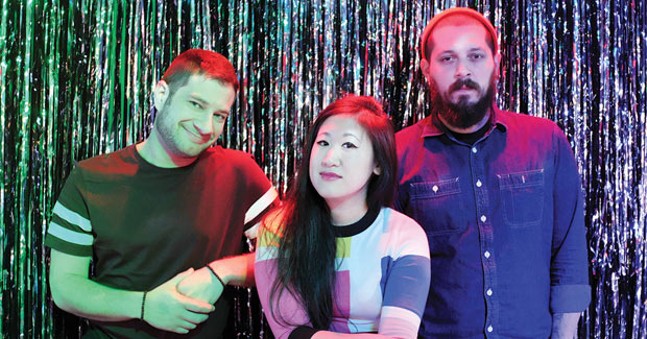 “Picture yourself in late-’70s, early-’80s Milan or Berlin. You’re just walking down an alley, and you hear music and follow it. You go into a divey bar and find a huge party with all this color, like walking into Oz.”

This was the vision for Jellyfish, a free dance party centered around Italo disco, new wave and post-punk music, as described by one of its DJs, Ricky Moslen.

Jellyfish is essentially a fusion of Moslen’s previous DJ night, Total Trash, Adam Shuck’s Ganymede, and Stephanie Tsong’s Bubblepop. The event started in September, and Jellyfish is about to throw its sixth party.

The three decided to put their DJ talents together to establish a queer-friendly dance night, free of Top 40 pop music. After picking three genres that aren’t usually at the top of folks’ minds, the DJs then set out to find a perfect, unique location for the party: P Town, a Baum Boulevard gay bar in Bloomfield, that doesn’t have much dance-night programming.

“It’s not on Butler or Liberty, so it’s just a little out of the way. The people that actually come to the event are the right crowd,” explains Moslen.

“It’s a destination, but it’s also where regulars hang out, and the owners tell us the regulars love this dance party,” says Shuck. “[Regulars] have come up to us and been like, ‘I haven’t heard this song in decades! How old are you?!’”

Also intriguing to patrons is the fact that the majority of the music Moslen, Shuck and Tsong play is made by international artists.

“With the location and music, it feels fresh and new, like travel,” says Moslen.

All three love to travel. Moslen works at Robert Morris University in international education, so he’s often coordinating travel and study-abroad trips. Shuck is co-chair of the Pittsburgh chapter of the Democratic Socialists of America and writes a daily newsletter (Eat That, Read This), and Tsong is a designer, illustrator and printmaker. Shuck and Tsong are also avid travelers — in fact, Tsong answered CP’s questions via email as she spent time in Ecuador.

Just like planning a trip to another country takes time and thoughtful research, so does the crafting of the playlist for the monthly party.

“We consistently challenge ourselves to find new music each time we throw an event, which can be fairly difficult, since there’s a bit of research involved,” wrote Tsong.

From YouTube to searching through the collections of passionate collectors on Discogs, the trio spends hours digging for new things to satisfy the Jellyfish crowd.

“I feel so invigorated discovering new music from other countries, where you really have to search to find that music. It’s hard to find it, but once you do, it’s like finding treasure,” says Moslen.

“In a weird way, [the research] feels like traveling, like exploring this culture, and subcultures of a country that I love,” adds Moslen.

“You do all this intense research, and then at the end of it, you just party with your friends,” laughs Shuck.

Because Jellyfish’s DJs find great pleasure in the sharing of their research, the gang assembled a mixtape of some of their favorite tracks thus far, and it can be acquired at the dance party. They also post a playlist of the songs they’ve played after the party ends, so revelers can identify their new favorite song.

But before the event, the team has to get together to make sure there’s no overlap. “It’s funny how many times we’ll all pick the same song to put in our mixes,” says Shuck.

“For such obscure music!” Moslen says with a chuckle. “What’s kind of cool is that I don’t think any of us are pretentious, which is pretty rare for a bunch of music dorks. But Italo disco is the least-pretentious music, and most of the songs are about how fun it is to dance. It’s fun, goofy music.”

Because the event itself doesn’t neatly fit into any single box, the people who come to Jellyfish are a diverse bunch. There are punks, non-punks, gender-non-conforming people, queer and straight folk, older and younger patrons. It’s an escape from the clique-ishness of most music scenes and the heavily divided world at large — a few hours in a comfortable space to dance away your cares to music you’ve maybe never heard before.

“That escapism is part of [Jellyfish]. The week before the party, I just keep thinking about how I can’t wait [for Jellyfish], so I can just drink and dance,” says Shuck. “I hope other people feel that way, too.”

Tsong, who describes the event as “rainbow radiance synth magic,” also feels that it’s a special escape from the trappings of societal norms and the sectioning off of social groups.

“Perhaps the most exciting thing about Jellyfish is that it seems to transcend the boundaries of subculture and gender/sexual orientation,” Tsong says. “I’m proud to be involved in such an inclusive and welcoming project.”