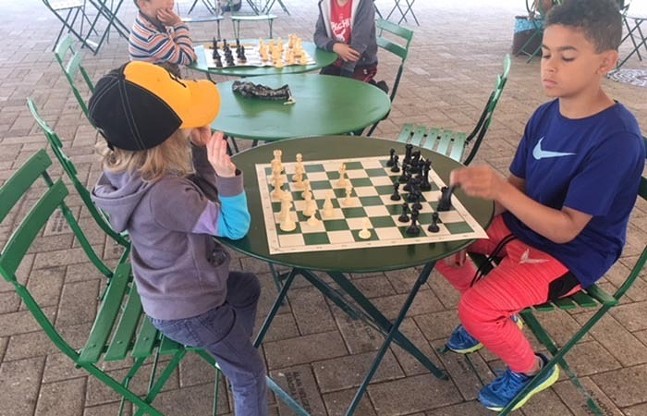 Photo: Courtesy of Queens Gambit
Young players with Queens Gambit
Chess has seen a recent surge in popularity thanks to the Netflix show The Queen’s Gambit, about an orphan who demonstrates a talent for the strategic game. Now a local organization is getting ready to invite young players back to in-person tournaments again, just in time to capitalize on the streaming service’s unlikely hit.

Queens Gambit, a nonprofit using chess to empower youth and families, announced that it would host its first over-the-board chess tournament in over a year and a half to celebrate Chess Week in Pittsburgh. The event is scheduled to take place on Sat., Oct. 2 at the Winchester Thurston School.

“Over the board” refers to chess done in person on a physical chessboard as opposed to online or through correspondence, which is also popular among players.

The event comes just in time for the fifth annual Chess Week, which Queens Gambit started in partnership with former Pittsburgh City Councilmember Dan Gillman, and the support of his then-chief-of-staff and current District 8 Councilmember Erika Strassburger.

In 2017, Gillman declared the first week of October Chess Week in Pittsburgh, and in 2018, County Councilmember Tom Baker made October 1-8 Chess Week in Allegheny County.

“The City of Pittsburgh, specifically Erika and her team, have always been so supportive of chess and the impact it can have on the community,” says Priore.

Priore says she started Queens Gambit in 2014 during her freshman year of high school, after years of playing competitive chess. She says that, after growing up in what she calls the “male-dominated chess scene,” she originally wanted to create an organization where “young women and girls could feel empowered through the game.”

“We believe that life is a series of decisions, and how you make them decides everything,” says Priore. “Queens Gambit uses education and extracurricular enrichment as a catalyst for change and social force for good in Pittsburgh. Chess teaches critical thinking and strategic skills needed for every aspect of life. We believe that through chess, anyone can learn the tools to succeed.”

While the organization still primarily focuses on girls and young women, Queens Gambit has expanded to include any young person interested in chess, regardless of gender identity, race, or economic status.

Priore claims that Queens Gambit has been the only chess organization in the area offering consistent virtual programs for young people since March 2020. However, she says that the pandemic has still limited the organization's access to many young players.

“It is also important to note that many young people don't have access to technology, and if they do, they are using that WiFi and battery life for school,” says Priore. “Now that we are back in person, we can reach the students who didn't have the opportunity to take part in virtual after-school activities.”

She adds that she hopes the pandemic has “shined a light on the digital divide and the need for access to technology and digital literacy courses.”

The tournament at Winchester Thurston School has sections for rated and unrated players and includes prizes for those who finish in the top three. Priore says they will also host a team event this year, adding that Marshall Elementary is leading with the number of individual participants, and will battle Franklin Elementary, Environmental Charter School, and Hampton Middle School for first place.

In addition to the tournament, Queens Gambit will also host two virtual events:
Representation in Chess: Female Leadership Panel and Chess in Action: Pittsburgh Leaders Discussion on Strategy, a roundtable discussion on the "power and role of strategic thinking techniques on important leadership decisions." Both events will take place on Wed., Oct. 6.