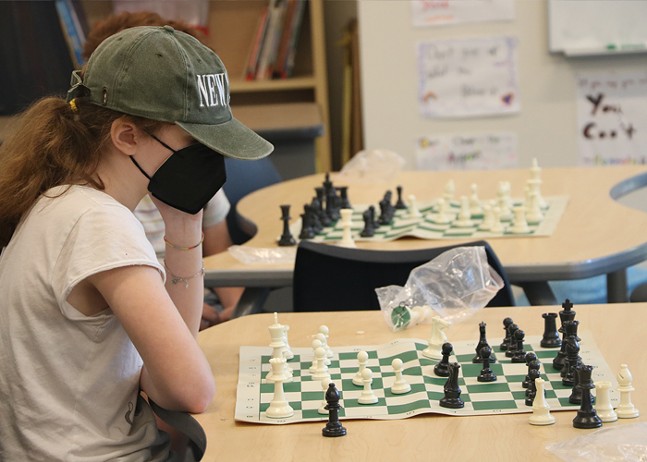 Photo: Chloe Master
Queens Gambit
Pittsburgh has plenty of fun pastimes to enjoy, from the oddly popular sport of pickleball to duckpin bowling to pinball. One organization has added to that list by instilling the love of chess in local youth. That mission will continue with an upcoming event open to players of all ages and skill levels.

The Queens Gambit Chess Institute of Pittsburgh will host Chess Fest, touted as the first-ever event of its kind in the city. Taking place on Sun., Oct. 2 in Downtown's Market Square, Chess Fest will serve as the centerpiece for Chess Week, described by Queens Gambit founder, president, and CEO Ashley Lynn Priore as celebrating “the intergenerational power of chess.”

Chess Week takes place in the first week of October, with this year's celebration running from Oct. 1-8.

“At the heart of our mission is a belief that chess serves as a common language that transcends traditional cultural differences, builds empathy, and emotional intelligence,” Priore tells Pittsburgh City Paper in an email. “Chess Fest 2022 is one for the ages, highlighting Pittsburgh as a pioneer for the game and true city of chess.”

She says Chess Fest will include speed chess tournaments for chess enthusiasts, opportunities for beginners and new players to learn the game, engaging activities for early learners, and special guest speakers. There will also be a simul, defined as a display where a single player takes on multiple games against different opponents, with an International Master.

“It is a community-building activity, and Queens Gambit is known for fostering innovative partnerships,” Priore says. She expands on this, adding that Queens Gambit “brings together leading groups in Pittsburgh who support our vision of strategic, inclusive, and civically-minded youth.” For example, she says the event is sponsored by Dollar Bank, Schell Games, and the Cherin Law Group. Priore also credits local sports teams the Pittsburgh Steelers, Pittsburgh Penguins, and Pittsburgh Pirates for donating to Queens Gambit.

This support extends to local government leaders as well. In 2017, Priore says former Pittsburgh City Councilor Daniel Gilman and former Allegheny County Councilor Tom Baker wrote proclamations to honor the “educational impact of chess in the region and celebrate Queens Gambit who is the leader of scholastic chess programming in the city.”

Photo: Chloe Master
Queens Gambit
Chess Fest adds to a number of Queens Gambit efforts from the last few years. In 2019, the nonprofit hosted a celebration in Schenley Plaza featuring Alexander Shabalov, an American chess grandmaster and a four-time winner of the United States Chess Championship. In 2020, when the COVID-19 pandemic put a moratorium on gatherings, Queens Gambit went virtual with an online celebration featuring Pittsburgh media personality Natalie Bencivenga. Last year, the group returned to in-person events with a scholastic chess tournament.

“Every year, we have something a little different to showcase the vast array of chess supporters in our network,” says Priore.

Regardless of how many fests and other events they present, Queens Gambit continues its effort to make the game of chess accessible and enjoyable to everyone, regardless of experience or background.

“We have something for everyone,” she says. “And no, you don't need to know how to play chess in order to come to the event! All are welcome.”
Chess Fest. 12-4 p.m. Sun., Oct. 2. Market Square, Downtown. Free. tqgchess.institute