Besides being a tremendous challenge, Tamara is also a lot of fun

Without a doubt, Tamara is Quantum Theatre's most exhausting production. For the audience, at least — physically for sure, intellectually and emotionally, too. It must be quite a handful for the cast and crew as well.

Based on real people in early (1927) Fascist Italy, John Krizanc and Richard Rose's interactive drama takes place in various rooms of a grand villa; the splendid halls of Rodef Shalom Congregation make a lovely stand-in. Audience members can choose which characters/threads of the story to pursue: upstairs, downstairs, all around the house. The evening even includes a catered meal at intermission.

It's no surprise that Tamara was written for a Canadian audience, the 1981 Toronto Theatre Festival. Our northern neighbors are in much better shape, and — officially, at least — they're bilingual. The title character speaks mostly French, and only one of her fellow players can translate for her. When she's around, that is.

Besides being a tremendous challenge, Tamara is also a lot of fun: puzzles and marathon combined. For any single playgoer, most of the action is (by definition) off-stage. Though not absolutely necessary, it helps to go with friends and split up the subplots, then compare notes on who did what to whom. No spoilers here, but be assured that no one is as s/he seems at the beginning. 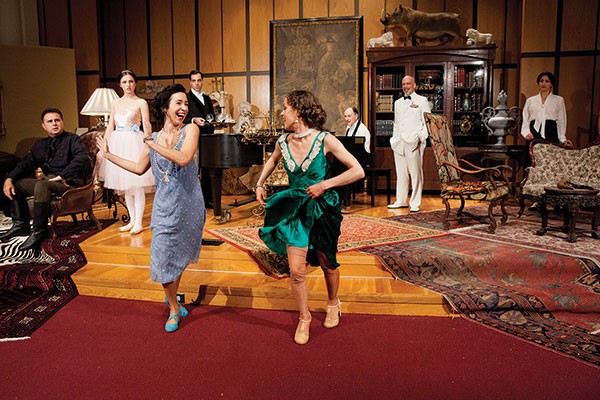 Photo by Heather Mull
Robin Abramson (left) and Megan MacKenzie Lawrence, foreground, and the rest of the cast of Quantum Theatre's Tamara

John Shepard directs a spot-on cast, led by Fermín Suárez as the "hero poet" of another era, and Ken Bolden and Robin Abramson as a strange, estranged couple of pianists. Robert Turano (né Koch) makes a welcome return home as a Fascist officer. Megan MacKenzie Lawrence, saddled with a language that distances her from the audience, brings to life the sparks of artist Tamara de Lempicka.

The "downstairs" characters have their own dramas as well as those interlocking with their "betters." Tammy Tsai is perfect as the dominating, domineering housekeeper, with Ethan Hova, Rachel McKeon and Thomas Constantine Moore as the star-crossed servants. Cathryn Dylan strikes an appropriately discordant note as the face of a Fascist future. Costumes, sets — all are gorgeous and scrupulously period.

During the centennial of World War I, Tamara provides pointed political and personal commentary on its aftermath. Wear comfy shoes, and rest assured you will be well fed.