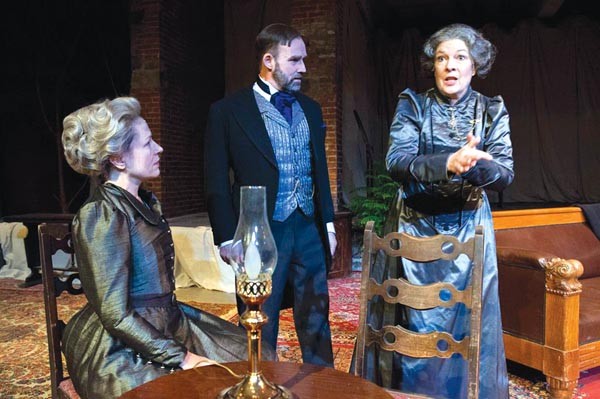 The 1896 play's backstory is that the title character, driven by lusts for power, played funny business at the bank he ran, leading to the economic ruin of untold innocents. Back then, such adventurous financiers were not rewarded because, alas, they were not too big to fail. Borkman went to prison in disgrace and left an unemployable pauper. Only the charity of his sister-in-law keeps a decent roof over his and his extravagantly estranged family's heads. Deep dark secrets ensue. Rising tensions and clashes predicted.

Once again Ibsen (translated by Michael Meyer) provides the meatiest roles for women. Robin Walsh and Bridget Connors drive the action as sisters and rivals for the affections of ultimately unworthy men. Daina Michelle Griffith vamps as the scheming seductress. Carly Otte abandons much of the reality of the play, becoming a dancing sylph as well as a guileless pawn.

This is not to overlook the guys. Ken Bolden draws on his repertoire of Shakespearean buffoons to create Borkman's only sympathetic character, a cheerful nebbish. As the title character, Malcolm Tulip looms over the first act and (metaphorically) bursts into flame in the second, engulfed in his sins, his betrayals and his delusions. Luka Glinsky as the younger Borkman echoes his family's misplaced dreams.

Those of us who remember Giles' long tenure as artistic director of the scruffy New Group Theatre in the 1980s see his youthful ambitions, and his long conversance with Ibsen, maturely fulfilled in Borkman. He exploits the many tools of the theater for a distinctive and engrossing exploration of a classic.