Quantum Theatre’s Chickens in the Yard

CHICKENS IN THE YARD 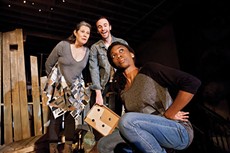 Photo by Heather Mull
From left: Laurie Klatscher, Alec Silverblatt and Siovhan Christensen in Quantum’s Chickens in the Yard

It’s fair to say of the past 25 years that there is no such thing as a “typical” Quantum Theatre production — except that they’re all challenging. That is definitely so for the inauguration of Quantum’s Gerri Kay New Voices Program, Chickens in the Yard, created by Hatch Arts Collaborative. It’s character-driven drama, art and music — and chickens.

Somewhere in Pittsburgh lives a family. Yes, a family, but there’s nothing traditional about it. Joyce Parks, a widow, is the matriarch and mother to John. Tom is John’s partner, and Abby is Tom’s sister. The chickens have names, too — Lucille Two, Eleanor Roosevelt, Bruce Lee and Anne Hutchinson — but the same four cast members portray all the characters, fair and fowl. The one-act moves back and forth through time, and through memory, to tell a piquant tale about some interesting people and their various approaches to life, love and death.

Chickens was originally produced in 2013, when the Pittsburgh-based Collaborative was hatched (their pun, don’t blame me), comprising writer Paul Kruse, director Adil Mansoor and producer Nicole Sherer. This Quantum-produced iteration, staged in a Lawrenceville art studio, involves a different team of performers and designers. The aforementioned characters are portrayed, respectively, by the always-adept Laurie Klatscher, the dapper Alec Silberblatt, schleppy but cuddly Joseph McGranaghan, and the fragile, frightened youngster Siovhan Christensen. They all play Joyce’s husband at some point, and sometimes each other, as well as the chickens — easily moving to avian from human.

Fully describing a Quantum Theatre production usually takes longer than just watching it. Chickens in the Yard, a well-paced and spirited 70 minutes, is worth experiencing in full.