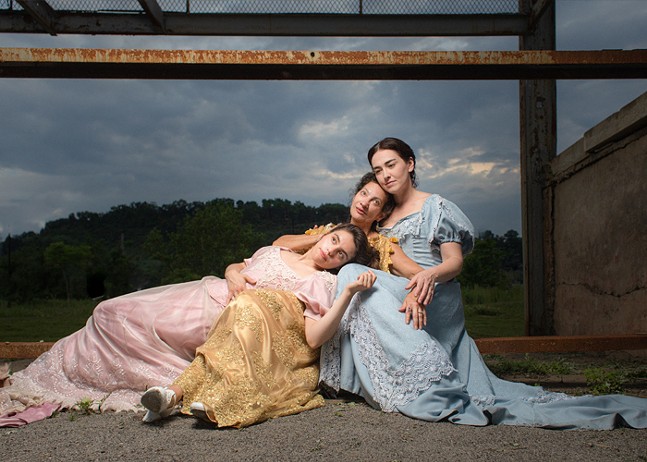 Quantum Theatre delivers a haunting meditation on the pace of change with its take on Anton Chekhov’s The Cherry Orchard. Adapted by Libby Appel, and staged on the former site of a steel mill, the outdoor production focuses on a downwardly mobile, formerly aristocratic family in early 1900s Russia as they prepare to sell their estate, which features the large, titular cherry orchard.

Quantum summoned the family's estate to the eastern bank of the Monongahela River in Hazelwood. In Bryce Cutler’s stunning scenic design, a skeleton of gray, slightly corroded I-beams delineates the bounds of the house, and everything the audience can see of Hazelwood’s riverfront is the estate. Often, characters wander through the landscape beyond the scaffolding while scenes unfold on stage, consumed in whatever activity brought them out there.

Quantum is known for staging productions in various unorthodox locations throughout the Pittsburgh area (past shows have taken place at the Carrie Furnaces in Rankin and in Bakery Square in Larimer, among others), and the company makes the most out of OneValley, a co-working space near the Hazelwood Green development.

The family at the center of The Cherry Orchard is led by Madame Lyubov Andreyevna Ranevskaya (played by Quantum's artistic director Karla Boos), who has just returned home from several years abroad after the tragic death of her son. Once a very wealthy woman, she now oversees selling the estate to satisfy the family’s debts. However, she and her brother, Leonid Andreieveitch Gayev (Peter Duschenes), prove too eccentric and detached from reality to save the family from bankruptcy. As the siblings are consumed by their own thoughts and fears, everyday dramas swirl throughout the household, all of which reflect the dynamics of a changing Russian society.

The program notes that The Cherry Orchard is an early example of theatrical realism from a time when putting on plays about “real life” that felt like real life was avant-garde. Director Katie Brook writes that The Cherry Orchard’s realism was intended to interrogate cultural norms rather than reinforce them — the play is particularly interested in the aftershocks of Tsar Alexander II’s emancipation of Russian serfs in 1861.

Before “the freedom came,” as one former-serf character puts it, aristocrats owned land and the peasants who worked it. Some Russians, like the perpetual student Trofimov (Joseph McGranaghan), herald emancipation as a sign of growing social equity. Not all serfs were pleased with emancipation, it seems, and the play offers Firs (Gregory Lehane), the family’s devoted butler and long-time serf, as their stand-in. Chekhov's plays contain a great deal of symbolism, but even in a play full of symbols, Firs stands out among the most powerful.

Just as Lyubov is haunted by grief, Russian society, Chekhov seems to suggest, is haunted by centuries of exploitative serfdom, or “owning living souls,” as the play puts it. And as serfdom recedes further into the past, uncertainty about the future grows within all of the play’s characters. Neither of Lyubov’s daughters, Anya (Julia de Avilez Rocha) and Varya (Moira Quigley), know much about who they are or what comes next.

Quantum's The Cherry Orchard leans into that uncertainty long enough to make it seem quite familiar.