Photo: Jason Snyder
Kyle Haden, Mimi Jong, and Hansel Tan in Quantum Theatre’s Chimerica
The once-bustling Ace Hotel in East Liberty has sat dormant for over a year. This is partly because of the pandemic, which put a stop to the kind of travel, dining, and events that kept the space open, as well as a legal dispute between the building owners and the company that owns the Ace brand.

Now, the venue has rebranded as The Maverick Hotel, and will soon play host to a theatrical production based on real-world events.

Quantum Theatre is using The Maverick’s large gym area to stage Chimerica, an award-winning play inspired by the iconic footage and photos of an unidentified man facing down four tanks in Beijing’s Tiananmen Square in June 1989. Dubbed “Tank Man,” his actions encapsulated the chaos in China, as months of student-led demonstrations protesting government corruption resulted in military intervention and thousands of citizens being killed.

At the center of the play — which premiered on Nov. 27 and runs through Dec. 19 — is character Joe Schofield, an American journalist set on tracking down the Tank Man he had photographed over two decades before. Pittsburgh actor and director Kyle Haden stepped into the role, saying he was attracted to how the story, set during the 2012 presidential election, captures the intertwined relationship between two major world powers, China and the United States.

“One of the things that I'm really interested by is that it's a view on America and on China by a Brit,” says Haden, referring to the play’s writer Lucy Kirkwood. “It's an outsider view. But I think the things that she gets right are really right.”

A synopsis from Quantum describes the show as a “deft political thriller as well as a riveting personal journey.” The plot finds that as China-U.S. relations dominate presidential election debates, a “mysterious message” linked to the Tank Man event appears in a Beijing newspaper. In response, Joe vows to “uncover the story behind the unknown hero” he photographed 23 years ago.

The play — named after a portmanteau that combines the names of the two countries — originally premiered in 2013 at London’s Almeida Theatre. Since then, it has been performed in various countries, and, in 2019, was adapted as a four-part miniseries for British television.

Haden says the Quantum version will transform the otherwise empty Maverick gym into a “cool playing space” with “a lot of fun levels.”

“I'm running all over it,” laughs Haden. “I'm getting my 10,000 steps in for this one.” He adds that Kirkwood combined both real and fictionalized elements to make the story work. He cites parallels between Chimerica and a 2006 television documentary by Frontline, and adds that Joe is an amalgamation of several Western photographers who documented the event.

Also bringing the play to life is art director and longtime Quantum collaborator Susan Tsu, a first-generation Chinese designer born in the U.S. A press release says Tsu provides “a unifying vision for Chimerica” by “drawing on both her own lived experience and a lifetime working with students from the United States and China.”

“Chimerica, while a distinctly Western play, nevertheless scratches at both the Chinese and American heart in search of the truth and the soul of our nations and who we have become since 1989,” says Tsu. “It reveals the uneasy connections between our people within the adversarial posturing of our governments.”

While Haden has performed with Quantum before as part of its 2018 production of Inside Passage, he feels especially honored to be cast by director Karla Boos to lead Chimerica.

“As an African-American actor, getting the opportunity to be ‘the American,’ like the face of America, is a really exciting opportunity,” says Haden. ”And the character is written as a white man, so I appreciate Karla thinking of me for this, and seeing traits that I have, and things that I can do as an actor in fitting into that.”

It also gave him a chance to delve into a subject he knew little about, acknowledging that he was only a teen when the events surrounding the Tank Man photo unfolded.

“For such a massive country with such power and influence in the world, I think the average American knows very little about China,” says Haden. “It’s been really cool getting a chance to learn more about the country. That’s what I love about theater, is that anytime I'm telling a story, whether I'm in it as an actor, or whether I'm helming as a director, it's a chance for me to learn about something.” 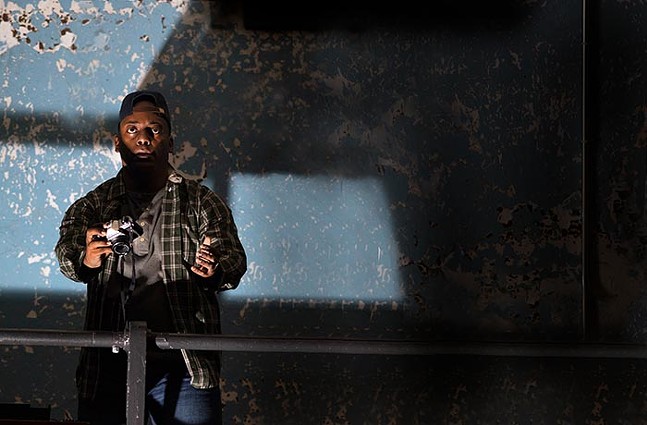 Photo: Jason Snyder
Kyle Haden in Chimerica
Like with Chimerica, he adds that he has done research for past plays, including reading up on the Pittsburgh Steelers and the city’s history when he directed Pittsburgh Public Theater’s production of The Chief, which follows the life and times of team founder Art Rooney.

“It was fun to pivot and jump into kind U.S.-Chinese relations and what happened in Tiananmen Square and kind of how China has developed and the backdrop of the 2012 election and revisiting that,” says Haden. “So I took the chance to do some Wikipedia deep dives and get lost in the vortex of the internet and read cool books.”

Beyond the heavy politics and history, however, is a human story, especially for Joe, who Haden says becomes consumed with “chasing down and getting close to his goal, and how he upends his life and other lives in pursuit of it.”

“There’s just a lot of humanity in this, too,” says Haden. “And for me, that's what I always react to in a play. It’s really cool to see people from different lifestyles and cultural backgrounds, to see where we have common similar interests, right? That's what makes us human. ... But I think people will appreciate that and maybe recognize themselves in folks that they didn't think they would recognize themselves in.”Quantum Theatre presents Chimerica. Continues through Thu., Dec. 19. The Maverick. 120 S. Whitfield St., East Liberty. $38-58. Pay-what-you-can shows also available. quantumtheatre.com/chimerica